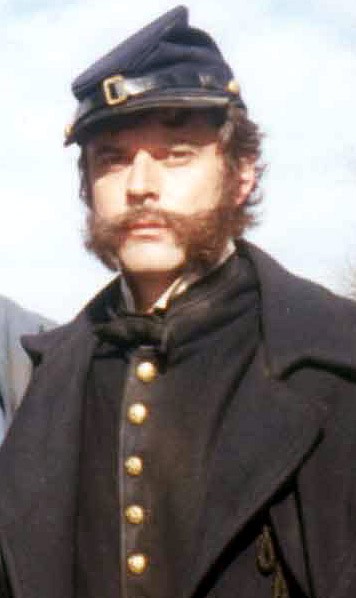 Christopher Thomas Howell (born December 7, 1966),[1] known as C. Thomas Howell, is an American actor and director. He has starred in the films Soul Man, The Hitcher, Grandview U.S.A., Red Dawn, Secret Admirer, and The Outsiders; he has also appeared in Gettysburg as Lt. Thomas Chamberlain, E.T. the Extra-Terrestrial, The Amazing Spider-Man, Justice League: The Flashpoint Paradox, and Suicide Squad: Hell to Pay.

Howell was born in Van Nuys, Los Angeles to Christopher N. and Candace Howell. He has two sisters, Stacy and Candi, and a brother, John.[2]

His father worked as a stunt coordinator and rodeo performer. As a young boy, Howell wanted to be a stuntman and was a child stunt performer. He began acting at the age of four, when he was cast in the Brian Keith Show episode, "The Little People".

When Howell was young, his parents divorced,[3] leaving his mother with both of her sons and daughter Stacy, and his father took little Candi with him to raise on his own.[4] Howell shared his time with each parent and started his career through his father's job. When he was 12, he became a rodeo champion at the California Junior Rodeo Association and was named "All-Around Cowboy" in August 1979. While growing up, he also spent time golfing with his grandfather (he earned his nickname "CT" as that was how his name was recorded on the screen boards).[citation needed] Howell graduated from Saugus High School in 1984. Howell attended The National Conservatory for Drama Arts.

Howell's showbiz debut was acting in The Brian Keith Show episode "The Little People" as a little boy whose ears are being checked out by a doctor. When he got older, he tried stunt acting like his father and worked on commercials for a while.[5]

He tried rodeo riding for a few years. In 1982, he made his film debut as Tyler in Steven Spielberg's E.T. the Extra-Terrestrial. Afterward, he was cast as the lead role Ponyboy Curtis in Francis Ford Coppola's The Outsiders, which earned him a Young Artist Award.

Following The Outsiders, he became a teen idol, appearing in teen magazines like Tiger Beat and 16 Magazine, which referred to him as "Tommy" and "Tom".

In 1984 he and Outsiders co-star, Patrick Swayze, reunited for Grandview, U.S.A., also with Jamie Lee Curtis, and Red Dawn, with Charlie Sheen and Lea Thompson. Howell also had a pivotal role in Tank, with James Garner and Jenilee Harrison. In 1985 he again starred in the lead role in Secret Admirer, opposite Lori Loughlin and Kelly Preston.

Howell was one of two final actors in the running to play Marty McFly in Back to the Future the other being Eric Stoltz, who was eventually selected.[citation needed] Michael J. Fox would later go on to replace Stoltz after filming had begun.

In 1986, he played a hitchhiker's target in the film The Hitcher. The sequel, in which he also starred, was released in 2003. He starred as a white student who pretends to be black to receive a scholarship in the poorly received Soul Man, which currently holds an aggregated score of 14% at Rotten Tomatoes.[6]

Howell has since stated that he does not regret playing the main character in blackface and that Soul Man was "an important part of life" and "an important film" for racial relations in the United States.[7]

In 1988, aged 21, Howell played Arturo Toscanini in the story of the world-renowned conductor in Franco Zeffirelli's Giovane Toscanini with Irma Capece Minutolo and Elizabeth Taylor, one of his very first straight-to-video releases. Howell and Kelly Preston reunited as lovers in A Tiger's Tale.[citation needed]

At the end of the 1980s and beginning of the 1990s, Howell appeared in The Return of the Musketeers and Side Out. In 1993, he starred with Linda Fiorentino and Nancy Allen in the campy thriller Acting on Impulse.

After several straight-to-video features and a starring role in That Night, he achieved success again in the film Gettysburg, which was popular with history buffs and history classrooms. He starred as Mike, a motorcycle courier in Mad Dogs and Englishmen (U.S. title: Shameless) with Elizabeth Hurley.

His made-for-television film credits include Suspect Device, Sealed with a Kiss and Dead Fire. He starred in Dads, an unsold pilot. He also appeared in the short-lived TV series Kindred: The Embraced.

He started an interest in crime-thrillers after starring in Payback and playing gangster Baby Face Nelson in a film of the same name. He went on to direct and star in the 1996 direct-to-video release, Pure Danger, featuring alongside Teri Ann Linn and prop comic, Carrot Top.

Howell returned to acting in the 2000s in films such as Asylum Days, the Gods and Generals prequel to Gettysburg, and The Hillside Strangler, in which he played serial killer Kenneth Bianchi.

In 2006, Howell starred in Hoboken Hollow. He also became a supporter of the production company The Asylum, which produced his straight-to-DVD films.[citation needed]

In 2005, he reunited with his Secret Admirer co-star Lori Loughlin, when he had a recurring role on her television show Summerland as Zac Efron's father. After War of the Worlds, he spent time directing straight to-DVD films.[citation needed]

He appeared as a doctor in The Poseidon Adventure, an adaptation of the 1972 film of the same name. His father's first stunt co-ordination was for the original film,[8] albeit uncredited. He briefly hosted a show on KLSX later that year.[citation needed]

Howell appeared in the 2012 film The Amazing Spider-Man.[9]

After filming The Outsiders, Howell co-starred in his own television series, Two Marriages, which ended after four episodes, but letters of support got it back on air. He later expressed disappointment in the series,[10] but eventually found it more satisfying.

After Two Marriages, Howell made guest appearances in shows like Moonlighting and The Hitchhiker. In 2000, Howell played a doctor stranded on a deserted island after a plane crash in Amazon.

He initially turned down a guest role in ER after missing out on a role he wanted, but his wife signed him up after yet another offer. Following ER, he guest appeared in 24. He guest starred in five episodes of Criminal Minds on CBS as serial killer George Foyet (The Boston Reaper), a recurring villain based on the Zodiac Killer.[citation needed]

Howell has played the role of Officer Bill 'Dewey' Dudek, a wild, loudmouth, but efficient police officer recovering from alcoholism, in the L.A. police drama Southland since 2009.[citation needed] He appeared in Seasons 1, 2, 3, and 4 and was promoted to a series regular for Season 5, which began in February 2013. The series was cancelled on May 10, 2013.[citation needed]

Howell has worked with Francis Ford Coppola many times and in other areas of making motion pictures including writing, producing, and directing. In 1995, he wrote and directed Hourglass, in which he starred with Sofia Shinas. The following year, he helped produce The Big Fall and Pure Danger.[citation needed]

Howell did not write or direct another film until 2004. He and his father co-wrote the made-for-television film Hope Ranch, which Howell produced. Howell went on to write and produce Blind Injustice the next year. Two years later he produced The Stolen Moments of September.[citation needed]

Report a problem
Send a note to C. Thomas Howell at FanPal • 2023