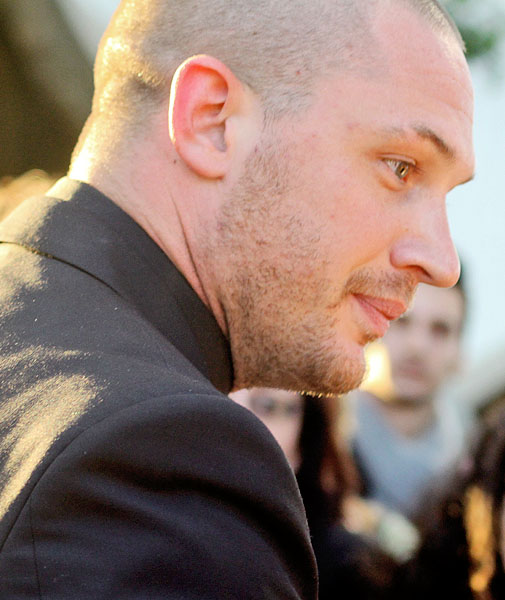 Hardy has performed on both British and American stages. He was nominated for the Laurence Olivier Award for Most Promising Newcomer for his role as Skank in the production of In Arabia We'd All Be Kings (2003), and was awarded the 2003 London Evening Standard Theatre Award for Outstanding Newcomer for his performances in both In Arabia We'd All Be Kings and for his role as Luca in Blood. He starred in the production of The Man of Mode (2007) and received positive reviews for his role in the play The Long Red Road (2010).

Hardy is active in charity work and is an ambassador for the Prince's Trust.[2][3][4] He was appointed Commander of the Order of the British Empire (CBE) in the 2018 Birthday Honours for services to drama.[5][6]

Edward Thomas Hardy[7] was born on 15 September 1977[8] in Hammersmith, London,[9] the only child of artist and painter Anne (née Barrett) and novelist and comedy writer Edward "Chips" Hardy.[10][11][12] He is of Irish descent.[13] Hardy was brought up in East Sheen, London.[14] He studied at Tower House School, Reed's School, and Duff Miller Sixth Form College. He later studied at Richmond Drama School and the Drama Centre London, a part of Central Saint Martins.[15] He has named Gary Oldman as his "hero", adding that he imitated scenes from the actor while at drama school.[16][17]
Read more...

Hardy at the London premiere of Inception in 2010

In 1998, Hardy won The Big Breakfast's Find Me a Supermodel competition at age 21 (and with it a brief contract with Models One).[18] Hardy joined Drama Centre London in September 1998, and was taken out early after winning the part of US Army Private John Janovec in the award-winning HBO-BBC miniseries Band of Brothers.[19] He made his feature film debut in Ridley Scott's war thriller Black Hawk Down (2001).[20] During this time, Hardy also had a brief stint as a rapper and hip hop producer with his friend Edward Tracy (under the name "Tommy No 1 + Eddie Too Tall"), with whom he recorded a mixtape called Falling On Your Arse In 1999 that remained unreleased until 2018.[21]

In 2002, Hardy gained some heavy international exposure as the Reman Praetor Shinzon, a clone of USS Enterprise Captain Jean-Luc Picard in Star Trek: Nemesis.[22] The following year, he appeared in the film Dot the i, and then travelled to North Africa for Simon: An English Legionnaire, a story of the French Foreign Legion. He then returned to the United Kingdom to feature in the horror film LD 50 Lethal Dose (2003).[23]

Hardy was awarded the 2003 London Evening Standard Theatre Award for Outstanding Newcomer for his performances in Blood and In Arabia We'd All Be Kings performed at the Royal Court Theatre and Hampstead Theatre.[24] He was also nominated for a 2004 Laurence Olivier Award for Most Promising Newcomer of 2003 in a Society of London Theatre Affiliate for his performance as Skank in the aforementioned production of In Arabia We'd All Be Kings.[25] Hardy appeared with Emilia Fox in the BBC miniseries The Virgin Queen (2005) as Robert Dudley, a childhood friend of Elizabeth I. Dudley's character has been described as an ambiguous young man who is torn between the affection of his wife (played by Fox), his love for Elizabeth and his own ambitions.[26] Hardy featured in the BBC Four adaptation of the 1960s science fiction series A for Andromeda.[27]

In 2007, he appeared in BBC Two's drama based on a true story, Stuart: A Life Backwards. He played the lead role of Stuart Shorter, a homeless man who had been subjected to years of abuse and whose death was possibly a suicide.[28] In February 2008, he played a drug-addicted rapist in the British horror-thriller WΔZ.[29] In September 2008, he appeared in Guy Ritchie's London gangster film, RocknRolla; Hardy played the role of gay gangster Handsome Bob.[30] Though a sequel to RocknRolla, titled The Real RocknRolla, has been rumoured to be in production, in which Hardy will reprise the role of Handsome Bob, filming has yet to commence on the project.[31] In 2008, Hardy starred in the film Bronson, about the real-life English prisoner Charles Bronson, who has spent most of his adult life in solitary confinement. For the film, he put on three stone (19 kg/42 pounds).[32]

In June 2009, Hardy starred in Martina Cole's four-part TV drama The Take on Sky One, as a drugs and alcohol fuelled gangster. The role gained him a Best Actor nomination at the 2009 Crime Thriller Awards.[33] In August 2009, he appeared in ITV's Wuthering Heights, playing the role of Heathcliff, the classic love character who falls in love with his childhood friend Cathy.[34][35]

In early 2010, Hardy starred in The Long Red Road at the Goodman Theatre in Chicago.[36] The play was written by Brett C. Leonard and directed by Philip Seymour Hoffman. Hardy won some good reviews for his portrayal of Sam, an alcoholic trying to drink away his past.[37][38] In 2010, he starred as Eames in Christopher Nolan's science fiction thriller Inception for which he won a BAFTA Rising Star award. Hardy replaced Michael Fassbender in the 2011 film adaptation of Tinker Tailor Soldier Spy,[39] released on 5 September 2011 at the 68th edition of the Mostra Internazionale d'Arte Cinematografica in Venice. In March 2010, Hardy signed a first look deal at Warner Bros.[40]

Hardy at the premiere of The Drop, 2014 Toronto Film Festival

In 2011, Hardy starred in the film Warrior, which was released on 9 September 2011 by Lionsgate Films. His performance as Tommy Riordan, who is trained by his father to fight in a mixed martial arts tournament against his brother, gained praise from critics. Hardy also starred in This Means War (2012), a romantic comedy directed by McG. He played the supervillain Bane in The Dark Knight Rises, the final film in Christopher Nolan's The Dark Knight Trilogy, released on 20 July 2012.[41] He played a bootlegger in John Hillcoat's crime drama Lawless (2012).[42] Hardy has signed up to play the lead role of Sam Fisher in Ubisoft's upcoming film adaptation of their video game series Tom Clancy's Splinter Cell.[43][44] He also appeared in Riz Mc's music video for the song "Sour Times".[45]

In 2014, Hardy starred in the crime film The Drop alongside James Gandolfini, in what would be the latter's final appearance in a feature film before his death. Hardy also joined the cast of the BBC crime drama Peaky Blinders in its second series. He portrays Alfie Solomons, the head of a Jewish gang and runner of a distillery which disguises itself as a bakery.

Hardy starred in five films in 2015. The first, Child 44, set in 1950s Soviet Union, saw him playing Leo Demidov, a Soviet secret police agent who investigates a series of child murders. Despite mild praise for his acting, Child 44 was reviewed negatively by critics and was a box office failure.[46] Hardy then played the title character, Max Rockatansky, in the action film Mad Max: Fury Road (2015).[47][48] His performance was praised by critics[49][50] and overall the film received critical acclaim and became a box office success,[51] grossing over $378 million against a $150 million budget, becoming the highest-grossing film in the Mad Max franchise.[52] He played a dual role as London gangsters Reggie and Ronnie Kray in the crime thriller Legend (2015).[53] On 7 December 2015, Hardy won Best Actor at the British Independent Film Awards for his portrayal of the Kray twins, and on the same night attended the premiere of the biographical western thriller The Revenant, in which he co-stars with Leonardo DiCaprio, at Leicester Square, London.[54] On 14 January 2016, Hardy received his first Academy Award nomination for Best Supporting Actor for his performance in The Revenant.[55]

Hardy co-starred in Christopher Nolan's action-thriller Dunkirk (2017), based on the British military evacuation of the French port of Dunkirk in 1940 during the Second World War. He appeared alongside Mark Rylance, Kenneth Branagh, Cillian Murphy and Harry Styles.[56] Hardy also co-produced and starred in the eight-part BBC One television drama series Taboo. It was created by Hardy, Steven Knight, and Hardy's father, Edward "Chips" Hardy. Taboo was aired in the United States by FX.[57]

In 2018, Hardy starred in the film Venom,[58][59] as the title comic book sometime hero, Eddie Brock/ Venom. Based on the Marvel source material, the film was released on 5 October, and is meant to be the start of "Sony's Universe Of Marvel Characters" (along with Silver and Black). It is connected to the Marvel Cinematic Universe as an "adjunct" film.[60][61]

Hardy is also attached to star as iconic war photographer Don McCullin in a film based on McCullin's autobiography, Unreasonable Behaviour.[63]

Hardy married producer Sarah Ward in 1999; they divorced in 2004.[64] From 2003 to 2004, he was in a relationship with actress Linda Park. They lived together in London and also co-starred in the play Roger and Vanessa in 2004. He has a son (born 2008)[65] with his then-girlfriend, assistant director Rachael Speed, whom he met on set of The Virgin Queen in 2005. They separated in 2009 after four years together.[66] In 2009, Hardy began a relationship with actress Charlotte Riley, after they met on the set of Wuthering Heights. They were married in July 2014.[67][68] In October 2015, their first child, a son, was born.[69] They had two rescued dogs, Max and Woodstock, one of which Hardy appeared with in a PETA advert to promote pet adoption.[70] Woodstock died on 5 June 2017 due to an aggressive case of polymyositis.[71]

In 2010, Hardy became an ambassador for the Prince's Trust, a leading UK youth charity which provides training, personal development, business start up support, mentoring, and advice.[72] In 2012, he and Riley became patrons of Bowel Cancer UK.[73] Prior to the inaugural Invictus Games held in London in September 2014, Hardy, along with other entertainers and athletes, read the poem "Invictus" in a promotional video.[74]

Hardy was named one of GQ magazine's 50 best dressed British men in 2015.[75] One of the highest profile actors in contemporary British popular culture, Hardy appeared on Debrett's 2016 list of the most influential people in the United Kingdom.[76]

Hardy was addicted to alcohol and crack cocaine during his mid-20s, after which he checked himself into rehab following a particular low point. He has said that he was 'out of control' on drink and drugs before he turned his life around, and was lucky that he did not contract HIV while he was at his lowest.[77][78]

During the filming of Bronson, Hardy met with Britain's most notorious prisoner several times and the two became good friends. Bronson was impressed with how Hardy managed to get just as muscular as he was and how well he could mimic his own personality and voice. Bronson has stated he believes Hardy was the only person who could play him.[79]

Hardy was appointed Commander of the Order of the British Empire (CBE) in the 2018 Birthday Honours for services to drama.[80]