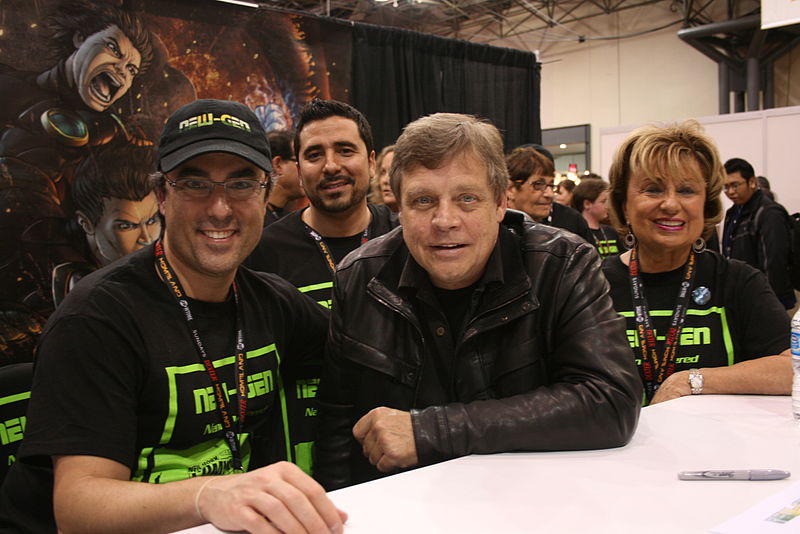 Mark Richard Hamill (/ˈhæmɪl/; born September 25, 1951) is an American stage, screen and voice actor. He has played Luke Skywalker in the Star Wars film series and for his voice-over work in animations and video games as the Joker, beginning with Batman: The Animated Series in 1992. Hamill has acted in several theater productions, including The Elephant Man, and is the cowriter of The Black Pearl comic book miniseries.

Hamill was born in Oakland, California, to Virginia Suzanne (née Johnson) and U.S. Navy Captain William Thomas Hamill.[1] He is one of seven children, having two brothers, Will and Patrick, and four sisters, Terry, Jan, Jeanie, and Kim.[2] His father has English, Scottish, Irish, and Welsh ancestry and his mother was of half Swedish and half English descent.[3][4] His father's changes of station and attendant family moves led to the Hamill children changing schools often. In his elementary years, he went to Walsingham Academy and Poe Middle School.[5] At age 11, he moved to the 5900 block of Castleton Drive in San Diego, California, where he attended Hale Junior High School.[6] During his first year at James Madison High School, his family moved to Virginia, and Hamill attended Annandale High School.[7] By his junior year, his father was stationed in Japan, where Hamill attended and was a member of the Drama Club at Nile C. Kinnick High School, from which he graduated in 1969.[citation needed][8] He later enrolled at Los Angeles City College, majoring in drama.[7]

Hamill has described his father as a staunch Roman Catholic, and "Nixon Republican".[9]

Hamill's early career included a recurring role on the soap opera General Hospital,[10] and a starring role on the short-lived sitcom The Texas Wheelers.[11] He portrayed the oldest son, David, in the pilot episode of Eight Is Enough, though the role was later performed by Grant Goodeve.[12] He also had guest appearances on The Bill Cosby Show,[13] The Partridge Family,[citation needed] Room 222 and One Day at a Time.[1] He appeared in multiple television films such as The City,[1] and Sarah T. - Portrait of a Teenage Alcoholic.[1]

Robert Englund was auditioning for a role in Apocalypse Now when he walked across the hall where auditions were taking place for George Lucas's Star Wars. After watching the auditions for a while, he realized that Hamill, his friend, would be perfect for the role of Luke Skywalker.[13] He suggested to Hamill that he audition for the role; Hamill did and won the role.[14]

Released in May 1977, Star Wars was an enormous, unexpected success and had a huge effect on the film industry. Hamill also appeared in the Star Wars Holiday Special in 1978[15] and later starred in the successful sequels The Empire Strikes Back and Return of the Jedi. During the time between the first two films, Hamill was involved in a serious automobile accident, fracturing his nose and left cheekbone.[13] False rumors spread that he required plastic surgery on his face.[16] For both of the sequels, Hamill was honored with the Saturn Award for Best Actor given by the Academy of Science Fiction, Fantasy and Horror Films.

Hamill reprised the role of Luke Skywalker for the radio dramatizations of both Star Wars and The Empire Strikes Back. For the Return of the Jedi radio drama, the role was played by a different actor.

Editions of Joseph Campbell's The Hero with a Thousand Faces (which influenced Lucas as he was developing the films) issued after the release of Star Wars in 1977 used the image of Hamill as Luke Skywalker on the cover.[17][18]

Hamill returned to the Star Wars universe in 2014, when he voiced the ancient Sith Lord Darth Bane,[19] in the final episode of the animated series The Clone Wars. He was nominated for a Daytime Emmy Award for his performance.

Initially, both Disney and Hamill were coy about whether Hamill would be a cast member of The Force Awakens.[21][22] In September 2013, Robert Englund, actor and long-time friend of Hamill, said that Hamill was currently working out in the gym. Englund stated "Mark now - they've got Mark in the gym because Mark's coming back as Luke Skywalker. They've got him doing his sit-ups." It was previously reported that both Hamill and Fisher had been assigned nutritionists and personal trainers to work with ahead of production.[23]

Hamill's role as the Joker began in the 1992 series Batman: The Animated Series[19] and continued to many later spin-off series, video games and films. Hamill received critical acclaim for his performance, which put him in high demand as a voice over actor of cartoon villains.[68]

The short-lived WB live-action series Birds of Prey, based on the comic book of the same title, featured a flashback sequence in which the Joker shoots Barbara Gordon and paralyzes her. This sequence featured Hamill voicing Joker, dubbed over actor/stuntman Roger Stoneburner whose facial structure more resembled the character.[citation needed] The actor's face was shot in the background so as to be slightly blurred.[relevant? – discuss]

Hamill voiced the Joker alongside his Batman: The Animated Series co-star Kevin Conroy as Batman and Jason Hillhouse as Dick Grayson in a feature of a storyboard scene included in the 2005 Special Edition DVD of Tim Burton's 1989 film Batman.[citation needed] This scene depicted the origin of Robin, which was not filmed because the producers felt it was out-of-place with the rest of the film.[citation needed]

Hamill has said that he has voiced the Joker for toys and amusement park rides. Although these jobs did not pay particularly well, he enjoyed even these small roles and admitted being protective of the character, preferring not to let "others sleep in my sleeping bag;"[70] he also self-identifies as a "real comic book nerd".[71]

Hamill has portrayed the Joker in a few Batman-themed video games, notably Batman Vengeance,[citation needed] the Sega CD version of The Adventures of Batman & Robin,[citation needed] and in Batman: Arkham Asylum.[70][13] Hamill again reprised the role in the Arkham sequel, Batman: Arkham City.[72] In May 2010, Hamill declared to IGN UK that his role in Arkham City would be his last as the Joker.[71][not in citation given] Some months later, with the announcement of Arkham City, he clarified his statements in the interview by saying, via his Twitter account, "Only said Arkham Asylum would be hard to top, not that I was quitting."[73] On October 19, 2011, shortly after the release of the game, Hamill announced his retirement on his Twitter account, saying "Hello/Goodbye Joker! I've enjoyed every minute behind the wheel of the Clown Prince's crazy car - I'm going to miss him more than I can say!!".[74][not in citation given] On June 2012, WB Games released the expansion pack titled "The Last Laugh" for the video game DC Universe Online, featuring Hamill as the Joker.[75][full citation needed][76] In 2015, Hamill yet again returned as the Joker in Batman: Arkham Knight with the character recurring through the game as a hallucination.[77]

Hamill has commented that if there would ever be an animated version of Batman: The Killing Joke, he would gladly voice the Joker again, encouraging fans to campaign for said adaptation.[79][80][full citation needed] On July 17, 2015, Hamill tweeted that he had his fingers crossed in hopes that he would be contacted to reprise his role as the Joker in the animated adaptation.[81] On July 27, Collider reported that Hamill will voice the Joker in the film.[82] The film was released in theaters for a two-day limited time. It was released on Digital HD on July 27, 2016. It was released on DVD and Blu-Ray on August 2. Positive reception was met for Mark Hamill's performance as the Joker, with some citing it as his best performance of the character.

Hamill reprised the Joker for the animated series Justice League Action. He also reprised the Trickster for the series, as well as voicing Swamp Thing.[83] In the animated short "Missing the Mark", Hamill voices a fictionalized version of himself, who appears alongside all three of his other characters.[84] Hamill once again voiced Joker in Lego DC Super-Villains, replacing voice actor, Christopher Corey Smith.[85]

Hamill has been nominated for two Annie Awards for his portrayal of the character, for an Interactive Achievement Award, for a Spike Video Game Award, and has won a British Academy Video Game Award for Best Performer.

Hamill at a signing for The Black Pearl at Jim Hanley's Universe in Manhattan, October 1996

Hamill is the co-writer of The Black Pearl, a comic book miniseries published by Dark Horse Comics.[86] He wrote an introduction to the Trade Paperback Batman: Riddler Two-Face which reprints various stories involving the Riddler and Two-Face to tie in with Batman Forever. He has also written several stories for Simpsons Comics, including "Catastrophe in Substitute Springfields!", which parodies DC's Crisis on Infinite Earths and also references several other classic comics.[87]

According to a 1981 profile in People, Hamill's "first serious love" was co-actor Anne Wyndham, cast as his sister on General Hospital, with whom he had an offscreen relationship.[88] Hamill would later describe experiencing seasons of on-set tension while working with her after their relationship ended.[89] In a 2017 interview, Hamill attributed his long, happy marriage to a non-actor, to learning, through his relationship with Wyndham, the danger of being competitive when in a relationship with a fellow actor.[90]

On December 17, 1978, Hamill married dental hygienist Marilou York in a private civil ceremony.[91] They have three children together: Nathan (born 1979), Griffin (born 1983), and Chelsea Elizabeth (born 1988).[92] He also has one grandchild by his son Nathan. Nathan was born during the production of The Empire Strikes Back and had a cameo appearance as one of the Royal Guards of Naboo in Star Wars: Episode I - The Phantom Menace.[93] Chelsea made a photographic appearance as an infant Axel Walker in the 1990 television series The Flash; the same photograph was used in the 2014 series.[94]

On January 11, 1977, before shooting one of his scenes in Star Wars, Hamill was in a car accident in which he fractured his nose and left cheekbone,[95] requiring seven hours of surgery. As a result, a double was used for the landspeeder pickup shots.[96] According to Hamill in a recorded interview, he was driving his BMW on a freeway, became distracted, and seeing that he was missing his offramp, attempted to negotiate four lanes of traffic. Hamill later said that the stories surrounding his injuries had become exaggerated. Confirming that he had only broken his nose, Hamill observed that "over the years it's built up into having my face reconstructed with plastic surgery."[16]

Hamill is an outspoken member of the Democratic Party. Prior to the 2012 election for the presidency of the United States, Hamill referred to Mitt Romney as a "snake oil salesman".[97] In 2016, he endorsed P.G. Sittenfeld's candidacy in the 2016 election for the United States Senate.[98] He has also criticized the tweets of Donald Trump by reading them out in his Joker voice.[99]

Hamill is a lifelong fan of Laurel and Hardy. In June 2016, he called into The Ross Owen Show on Black Sky Radio to talk for over an hour about his passion for Stan and Ollie.[100] He was also an early fan of David Letterman, having occasionally appeared on Late Night with David Letterman, as well as taping every episode and keeping a journal documenting the show. After encountering writer Chris Elliott, Hamill was asked for assistance in helping determine the 1,000th Viewer Mail that Letterman had answered. His practice continued to Letterman's new show on CBS, but eventually stopped.[101]

He became a supporter of English football club Wolverhampton Wanderers F.C. in 2017.[102]

In December 2017, Hamill became an affiliate member of the Royal Society of Chemistry, having had an interest in the science since childhood.[103]