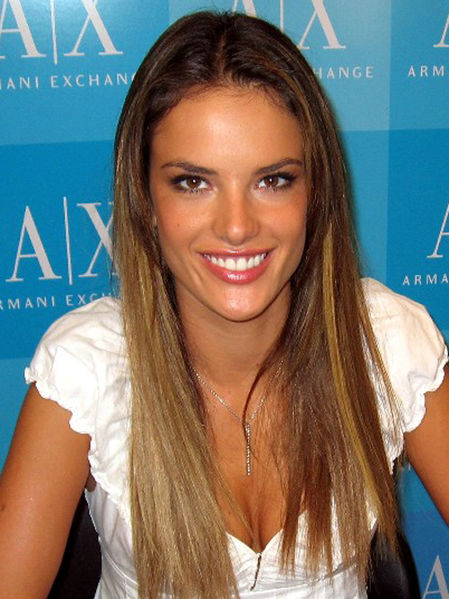 Alessandra Corine Maria Ambrósio[8] (born April 11, 1981)[1] is a Brazilian model and actress. Ambrosio is known for her work with Victoria's Secret and was chosen as the first spokesmodel for the company's PINK line. Ambrosio was a Victoria's Secret Angel from 2000 to 2017 and has modeled for brands such as Next, Armani Exchange, Christian Dior, and Ralph Lauren.

In 2012, she was ranked number six on Forbes' list of the highest-paid models, estimated to have earned $6.6 million in one year.[9] She is often cited by the popular media as one of the world's sexiest women.[10] As an Angel, she was chosen as one of People magazine's annual "100 Most Beautiful People in the World" in May 2007.[11]

She enrolled at a modelling class at the age of 12, and at the age of 14, she was one of 20 finalists for the 1995 Elite Model Look national competition for Brazil.[12][17] Ambrosio was always insecure about her large ears, and at the age of 11, she had cosmetic surgery to have her ears pinned back, though two years later she suffered complications.[18] In 2006, she appeared on The Tyra Banks Show, and said that the surgery was a bad experience and has discouraged her from ever getting plastic surgery again.[19]

Ambrosio in 2007 at an Armani Exchange event in New York.

In 2004, Ambrosio launched her line of swimwear called Alessandra Ambrosio by Sais, a division of Rosa Chá. It sold 10,000 units in its first month on the market.[20][24][25] Ambrosio was the face for the UK company Next[26] and starred in their first television campaign in 12 years.[27] On the July 2009 cover of Marie Claire, Ambrosio appeared in a spread with Sacha Baron Cohen to promote Baron Cohen's 2009 film Brüno.[28]

Ambrosio became the face of Brazilian sportswear brand Colcci costarring with Ashton Kutcher in a denim ad.[29] She was ranked No. 5 on Forbes' The World's Top-Earning Models list, with an estimated earnings of $5 million over 2010-2011.[29] In October 2011, Ambrosio became Vogue's blogger, commenting on her wardrobe by posting one photo of herself each day for a month.[30] In August 2012, she appeared in the London 2012 Olympic Closing Ceremony as part of Rio de Janeiro's handover show.[31]

In spring 2014, Ambrosio launched her own fashion and lifestyle brand named Ále by Alessandra [32] in a collaboration with American retailer Cherokee. The line features casual wear to formal attire and is aimed at females between 18 and 35 years old.[33] The apparel line was first shown by Southern California-based retailer Planet Blue.[34] For this brand, Ambrosio used her intellectual property company, Silver Sunrise LLC, which works with Cherokee as its global licensing agent.[34]

Ambrosio appeared in the February 2016 issue of GQ alongside Portuguese footballer Cristiano Ronaldo.[35]

Ambrosio was chosen by NBC alongside fellow Brazilian model Adriana Lima as the channel's food and culture correspondents for the 2016 Summer Olympics.[36][37]

Ambrosio is now considered as one of the icons in the fashion industry models.com. [38]

By 2006, she was selected as the first spokesmodel for the Victoria's Secret "PINK" line[1] In 2005, she walked the Victoria's Secret Fashion Show runway wearing lingerie made entirely out of candy.[39] In the 2008 edition of the Fashion Show, she walked the runway three months after giving birth to her first child,[40] and opened the show the following year in 2009. The 2011 show saw her wearing the heaviest wings (30 lb) ever made for the show while pregnant with her second child.[41]

In 2012, Ambrosio was chosen to wear the "Fantasy Bra". The Floral Fantasy Bra, created by London Jewelers, features amethysts, rubies, sapphires and diamonds (including a 20-carat white diamond in the center), all set in rose and yellow gold, according to InStyle. There's also a matching belt adorned with more than 5,200 precious stones. In 2014, she wore the Dream Fantasy Bra, alongside her fellow angel Adriana Lima. Both of the bras cost $2.5 million each.

Ambrosio has made several television appearances, notably a cameo as herself on HBO's Entourage;[42] The Late Late Show with Craig Kilborn;[43] Late Night with Conan O'Brien;[44] A guest judge on Project Runway Season 2: Team Lingerie and twice on The Tyra Banks Show.[45] She also appeared on America's Next Top Model in the series' 20th cycle.

In 2006, she had a cameo in the box-office hit film Casino Royale, appearing briefly as Tennis Girl #1.[21][46] Ambrosio guest-starred on the How I Met Your Mother episode "The Yips" on November 26, 2007 with her fellow Victoria's Secret Angels Adriana Lima, Selita Ebanks, Marisa Miller, Miranda Kerr, and Heidi Klum.[47] She also made a cameo appearance during the New Girl episode "Prince".[48]

Ambrosio made her acting debut in the Brazilian telenovela Verdades Secretas, which premiered on Rede Globo on June 8, 2015, playing the role of former top model Samia. She appeared as herself in the 2016 film, Teenage Mutant Ninja Turtles: Out of the Shadows.[49]

Ambrosio serves as an ambassador for the National Multiple Sclerosis Society.[56]