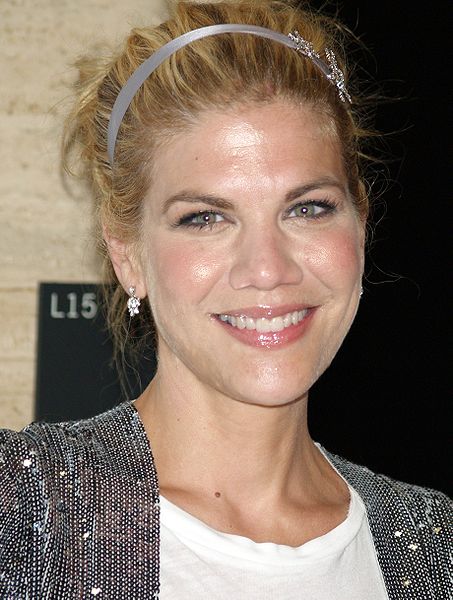 Kristen Angela Johnston (born September 20, 1967)[2] is an American actress. She is known for her role as Sally Solomon in the television series 3rd Rock from the Sun. She also starred as Wilma Flintstone in The Flintstones in Viva Rock Vegas and as Holly Franklin in the sitcom The Exes.

Johnston was born in Washington, D.C.,[2] but was raised mostly in Fox Point, Wisconsin, a suburb of Milwaukee, where she attended St. Eugene's Catholic Grade School and Whitefish Bay High School. She spent some of her teen years in Sweden and in South America and earned a Bachelor of Fine Arts degree in drama at New York University.
Read more...

Johnston made her professional stage debut with New York's Atlantic Theater Company, which was founded by playwright David Mamet. During her association with that company, she appeared in such productions as As You Like It, Girl's Talk, Stage Door, Author's Voice, Portrait of a Woman, and Rosemary for Remembrance.

She has performed with the Naked Angels Theater Company in The Stand-In and Hot Keys, and with New York Stage and Film in Kim's Sister, with David Strathairn and Jane Adams. For her performance in The Lights at Lincoln Center Theater, Johnston was nominated for a Drama Desk Award as Best Supporting Actress. The show brought her to the attention of a Carsey-Werner television executive. After numerous auditions in 1996 for the TV series 3rd Rock from the Sun, she won the role of Sally Solomon. She starred in the series from 1996 to 2001 along with John Lithgow, Jane Curtin, French Stewart, and Joseph Gordon-Levitt, and the role earned her two Emmy Awards for best supporting actress in a comedy series.

Johnston made her feature film debut in The Debt, winner of Best Short at the 1993 Cannes Film Festival. In 1995, she played Kate in Backfire! She played Esmeralda, a sea hag in "Thrill Ride", a family friendly film to be released in 2016. Other television credits include guest-starring roles on the series Chicago Hope, Hearts Afire, and The 5 Mrs. Buchanans. She was also the narrator in Microscopic Milton on the Disney Channel. Her significant roles in commercially successful movies included Austin Powers: The Spy Who Shagged Me in 1999, Ice Age, and Music and Lyrics in 2007.

In 1998, she was a spokesmodel for the Clairol company, as well as appearing on Bad Religion's No Substance album cover.[3]

Johnston appeared in the sixth and final season of Sex and the City. In the episode entitled "Splat!", her character, Lexi Featherston, an aging party girl, accidentally falls out of a window and dies (after saying, "I'm so bored I could die."), prompting Carrie Bradshaw (played by Sarah Jessica Parker) to re-examine her life. In 2005, Johnston was featured in six episodes of NBC's ER. She was cast as Patsy in a proposed American remake of the British TV show Absolutely Fabulous, but the series was never picked up by a network. She appeared in a recurring role in the 2009 season of Ugly Betty and had a single-episode appearance as a dominatrix in the second season opener of Bored to Death.

In her autobiography, Guts: The Endless Follies and Tiny Triumphs of a Giant Disaster, Johnston discusses an addiction to alcohol and pills that began when she was in high school. She mentioned that at the height of her addiction she drank on average 2 bottles of wine per evening. She stated in the 2012 book that she had been sober for five years. Through her charity SLAM, NYC (Sobriety, Learning and Motivation), she mentors high school girls from New York City with addiction and self-esteem issues[5] and has been crusading for the city to build a recovery high school.[6]

Johnston said she was diagnosed in November 2013 with lupus myelitis, which caused her to miss filming for some episodes of her series The Exes. A character played by Leah Remini was introduced in season three to cover Johnston's absence.[7][8]

Report a problem
Write to Kristen Johnston at FanPal • 2022