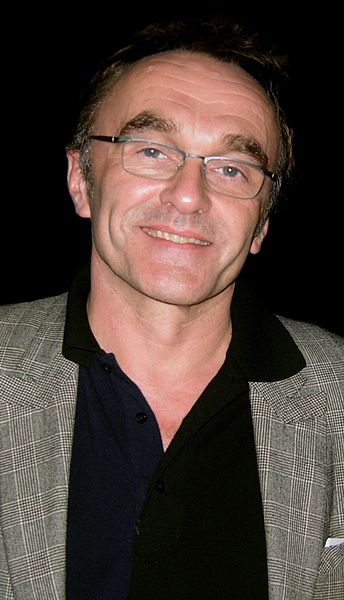 Boyle's 2008 film Slumdog Millionaire, the most successful British film of the decade, was nominated for ten Academy Awards and won eight, including the Academy Award for Best Director. He also won the Golden Globe and BAFTA Award for Best Director. Boyle was presented with the Extraordinary Contribution to Filmmaking Award at the 2008 Austin Film Festival, where he also introduced that year's AFF Audience Award Winner Slumdog Millionaire.

In 2012, Boyle was the Artistic Director for Isles of Wonder, the opening ceremony of the 2012 London Summer Olympic Games.[2] He was subsequently offered a knighthood as part of the New Year Honours, but declined.[3] In 2014, it was announced that Boyle would become a patron of HOME in Manchester.[4]

Danny Boyle was born on 20 October 1956[1] in Radcliffe, Greater Manchester, England, about 6 miles north of Manchester city centre, to Irish parents from County Galway.[5][6] Although he now describes himself as a "spiritual atheist",[7] he was brought up in a working class Catholic family. Boyle was an altar boy for eight years and his mother had the priesthood in mind for him, but aged 14 he was persuaded by a priest not to transfer from school to a seminary.[8]

Whether he was saving me from the priesthood or the priesthood from me, I don't know. But quite soon after, I started doing drama. And there's a real connection, I think. All these directors - Martin Scorsese, John Woo, M. Night Shyamalan - they were all meant to be priests. There's something very theatrical about it. It's basically the same job - poncing around, telling people what to think.[9][10]

He later studied at Thornleigh Salesian College in Bolton,[11] and studied English and Drama at Bangor University.[5][12] While at university, Boyle dated the actress Frances Barber.[13]

Boyle is the patron of North West-based young people's substance misuse charity, Early Break, which was founded and based in his home town of Radcliffe. Boyle is also a trustee of the UK-based African arts charity Dramatic Need.[14]

On 16 February 2017 Boyle announced his bid to help launch a £30m film and media school in Manchester, stating: "This is just what Manchester needs and I am delighted to be part of the International Screen School Manchester."[15]

Boyle (back row, third from right) with the cast of The Children's Monologues in 2010

Upon leaving school he began his career at the Joint Stock Theatre Company, before moving onto the Royal Court Theatre in 1982 where he directed The Genius by Howard Brenton and Saved by Edward Bond. He also directed five productions for the Royal Shakespeare Company.[16] In 1987 Boyle started working in television as a producer for BBC Northern Ireland where he produced, amongst other TV films, Alan Clarke's controversial Elephant before becoming a director on shows such as Arise And Go Now, Not Even God Is Wise Enough, For The Greater Good, Scout and two[17] episodes of Inspector Morse. These were Masonic Mysteries and Cherubim and Seraphim. Danny Boyle is not to be confused with a different Daniel Boyle, who is not related, but who scripted five original teleplays for Inspector Morse at about this time, and who has continued to write and adapt crime stories for television including the first episode of Lewis, and much of the popular series Hamish Macbeth.[18]

Boyle was responsible for the BBC2 series Mr. Wroe's Virgins in 1993.[16] In between the films The Beach and 28 Days Later Boyle directed two TV films for the BBC in 2001 - Vacuuming Completely Nude in Paradise and Strumpet.[19]

On 14 November 2010, he directed a one night play at the Old Vic Theatre titled The Children's Monologues with Sir Ben Kingsley, Benedict Cumberbatch, Tom Hiddleston, Gemma Arterton and Eddie Redmayne as the cast. In 2011 he directed Frankenstein for the National Theatre.[20] This production was broadcast to cinemas as a part of National Theatre Live on 17 March 2011.[21] He has also appeared on Top Gear and drove the fastest wet lap at that time.[22]

In 2014, it was announced that Boyle would become a patron of HOME in Manchester.[4]

Boyle prior to the 2012 London Summer Olympics opening ceremony

Boyle was Artistic Director for the 2012 Summer Olympics Opening Ceremony in London. Over the years, Olympic Opening Ceremonies have become multimillion-pound theatrical shows, which have become known for their extravagance and pageantry to celebrate the start of the largest multi-sport event in the world. The ceremony, entitled Isles of Wonder, charted aspects of British culture, including the Industrial Revolution and British contributions to literature, music, film and technology. Reception to the ceremony was generally positive, both nationally in the United Kingdom and internationally.[23][24][25][26] In December 2012 it was widely reported that Boyle turned down a knighthood in the New Year Honours list. He told BBC Radio 4 "I'm very proud to be an equal citizen and I think that's what the Opening Ceremony was actually about."[27]

Boyle's love for film began with his first viewing of Apocalypse Now:

It had eviscerated my brain, completely. I was an impressionable twenty-one-year-old guy from the sticks. My brain had not been fed and watered with great culture, you know, as art is meant to do. It had been sandblasted by the power of cinema. And that's why cinema, despite everything we try to do, it remains a young man's medium, really, in terms of audience.[28]

The first film Boyle directed was Shallow Grave.[16] The film was the most commercially successful British film of 1995,[29] won the BAFTA Award for Best British Film, and led to the production of Trainspotting, based on the novel by Irvine Welsh.[30] Working with writer John Hodge and producer Andrew Macdonald, Shallow Grave earned Boyle the Best Newcomer Award from the 1996 London Film Critics Circle.[29] Shallow Grave and Trainspotting caused critics to claim that Boyle had revitalised British cinema in the early '90s.[16] The BFI ranked Trainspotting the 10th greatest British film of the 20th century.[31]

Boyle declined an offer to direct the fourth film of the Alien franchise, instead making A Life Less Ordinary using British finance.[32][33]

Boyle's next project was an adaptation of the cult novel The Beach. Filmed in Thailand with Leonardo DiCaprio in a starring role, casting of the film led to a feud with Ewan McGregor, star of his first three films.[16] He then collaborated with author Alex Garland on the post-apocalyptic horror film 28 Days Later.[34]

He also directed a short film Alien Love Triangle (starring Kenneth Branagh), which was intended to be one of three shorts within a feature film. However the project was cancelled after the two other shorts were made into feature films: Mimic starring Mira Sorvino and Impostor starring Gary Sinise.[35] In 2004 Boyle directed Millions,[9] scripted by Frank Cottrell Boyce.[36] His next collaboration with Alex Garland[9] was the science-fiction film Sunshine, featuring 28 Days Later star Cillian Murphy, and was released in 2007.[37]

In 2008 he directed Slumdog Millionaire, the story of an impoverished child (Dev Patel) on the streets of Mumbai, India who competes on India's version of Who Wants to Be a Millionaire?, for which Boyle won Academy and BAFTA Awards for Best Director. The most successful British film of the decade, the film won eight Academy Awards and seven BAFTA Awards in total.[38][39] On film-making Boyle commented, "To be a film-maker...you have to lead. You have to be psychotic in your desire to do something. People always like the easy route. You have to push very hard to get something unusual, something different."[16] Andrew Macdonald, producer of Trainspotting, said "Boyle takes a subject that you've often seen portrayed realistically, in a politically correct way, whether it's junkies or slum orphans, and he has managed to make it realistic but also incredibly uplifting and joyful."[16]

In 2010, Boyle directed the film 127 Hours, starring James Franco and featuring Amber Tamblyn and Kate Mara. It was based on Aron Ralston's autobiography Between a Rock and a Hard Place, which detailed his struggle of being trapped under a boulder while canyoneering alone in Blue John Canyon, southeastern Utah, and resorting to desperate measures to survive. The film was released on 5 November 2010 to critical acclaim. The film got six nominations at the 83rd Academy Awards, including Best Picture and Best Adapted Screenplay for Boyle and Best Actor for Franco.[40][41]

Boyle's next film was Trance, while another instalment of the 28 Days Later franchise is in the development stages.[42][43] Boyle has stated previously that in theory the third instalment of the series would be titled 28 Months Later, but alluded to a film taking place somewhere else in the world he created in 28 Days Later and 28 Weeks Later. He is also stated to be producing the upcoming film Paani.[44] He has directed the sequel to Trainspotting, T2 Trainspotting.[45]

Boyle told an interviewer about the eclectic range of his films, "There's a theme running through all of them—and I just realised this. They're all about someone facing impossible odds and overcoming them."[46] With a strong interest in music, Boyle has mentioned in interviews that he has considered a musical film with original compositions. Boyle has also expressed interest in an animated film, and, in 2013, a sequel to 28 Weeks Later.[47]

In a BBC interview, Boyle stated that he didn't write his own films but they did reflect his personality. "I am not a big auteur fan and like to work with writers, but ultimately a film is a director's vision, because he gets all its elements together towards that vision."[49]

In March 2018, Boyle confirmed he would be directing the new James Bond movie, Bond 25.[50] In August 2018, it was announced that he no longer would direct the film due to creative differences.[51]

In March 2018, Danny Boyle and writer Richard Curtis announced they were working on a musical comedy set in the 1960s or 70s centred around a struggling musician. The Untitled Danny Boyle/Richard Curtis film is scheduled for release in September 2019.

In 2010, The Tablet named Boyle one of Britain's most influential Roman Catholics.[54] The BBC referred to Boyle as a “titan of the British film industry - renowned for his spunky grit - typified by his 1996 film Trainspotting.”[55] In 2012, Boyle was among the British cultural icons selected by artist Sir Peter Blake to appear in a new version of his most famous artwork - the Beatles' Sgt. Pepper's Lonely Hearts Club Band album cover - to celebrate the British cultural figures of his lifetime.[56][57]