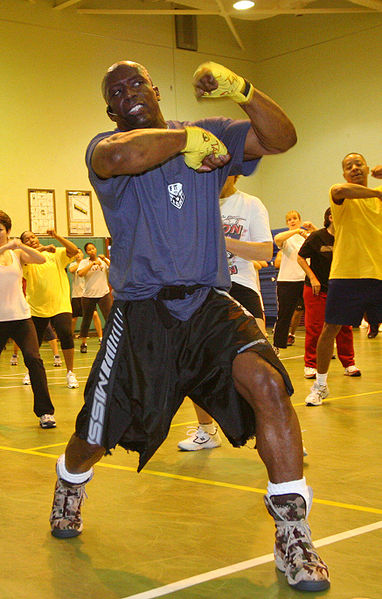 Blanks was born in Erie, Pennsylvania, the fourth of fifteen children.[citation needed]

Blanks began his study of the martial arts at the age of eleven, attending Karate and Taekwondo classes.[2][6] He was born with an anomaly in his hip joints that impaired his movement. The resulting clumsiness caused taunts from Blanks' siblings and led his instructors to believe that he would never accomplish much. Blanks found the answer to these challenges in karate. When he saw Bruce Lee on TV, he decided he wanted to be a world martial-arts champion, which helped counter the hip anomaly.[7]

Blanks was hired as a bodyguard for lead actress Catherine Bach during the filming of 1988's Driving Force, which was filmed in Manila during a time of political unrest. Blanks impressed the producers and was written into the script in a supporting role.[8] This led to Blanks' work in several martial arts films, including King of the Kickboxers and the first Bloodfist. Perhaps his most recognizable role to mainstream audiences is in the opening scene of Tony Scott's The Last Boy Scout, where he plays a doomed pro-football player. Blanks also appeared as the kickboxing instructor to Ashley Judd's character in Kiss the Girls.

In the late 1980s, Blanks developed the Tae Bo workout, while running a karate studio in Quincy, Massachusetts. He used components of his martial arts and Boxing training.[9] The name is derived from taekwondo and boxing.[10] Blanks opened a fitness center in Los Angeles to teach his new workout. He later attracted some celebrity clients such as Paula Abdul, and the popularity of the workout quickly grew, becoming a pop culture phenomenon after Blanks began releasing mass-marketed videos. He sold over 1.5 million VHS tapes in his first year,[11] and is reported to have grossed between $80 million and $130 million in sales.[11][12]

Blanks is a Christian and released a special line of Tae Bo workouts called the "Believer's" series that includes motivational prayers and other Christian components. He has appeared on the Christian television network TBN.[13]

In 1974 Blanks married Gayle H. Godfrey, whom he met in karate class. Shortly after the marriage, he adopted Gayle's daughter, Shellie, who had been born in 1973. Shellie Blanks Cimarosti, a martial artist, is prominently featured in many Tae Bo videos. Shellie has also produced her own video called Tae Bo Postnatal Power, as well as hosted her father's new infomercial Tae Bo T3 (Total Transformation Training). Gayle and Blanks also have a son, Billy Blanks, Jr., who works as a dancer, singer and fitness instructor. Blanks Jr. produced several best-selling DVDs,[14] including Cardioke and Fat Burning Hip Hop Mix. He has also starred in a touring production of the musical Fame, and has worked as a dancer in music videos with Madonna, Quincy Jones and Paula Abdul.[14][15][16][17][18]

Blanks and Godfrey were divorced in 2008 after 33 years of marriage. Godfrey filed for divorce, citing irreconcilable differences.[19]

In November 2008, Blanks became the father of a new daughter, named Angelika. The mother is Tomoko Sato, whom Blanks met in 2007 and who worked as his Japanese interpreter.[1] Blanks and Sato's marriage was formally registered in January 2009 and their wedding ceremony was held on June 20, 2009. He relocated to Japan in 2009. He has also adopted Sato's two daughters, Marriett and Erika Peterson.[citation needed]

Blanks on board USS La Salle in January 2002 Blanks in US Military Base in Yokosuka, Japan in April 2006