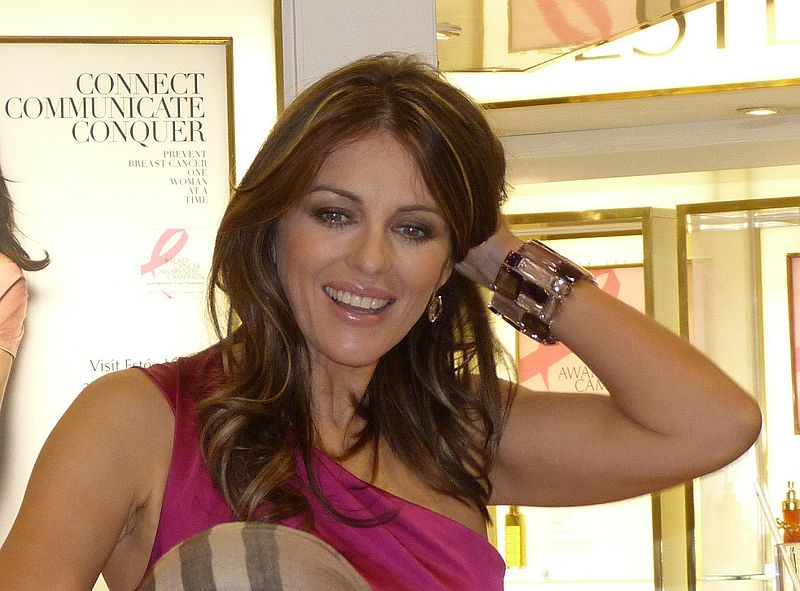 Elizabeth Jane Hurley (born 10 June 1965), more generally known as Liz Hurley, is an English actress and model. She has been associated with the cosmetics company Estée Lauder since the company gave Hurley her first modelling job at the age of 29.[1] They have featured her as a representative and model for their products, especially perfumes such as Sensuous, Intuition, and Pleasures, since 1995.[2] Hurley owns an eponymous beachwear line.[3]

As an actress, her best-known film roles to date have been as Vanessa Kensington in Mike Myers' hit spy comedy, Austin Powers: International Man of Mystery (1997) and as the Devil in Bedazzled (2000).[4] In 2015, Hurley began starring in the E! original series The Royals.

In the 1990s, Hurley became known as the girlfriend of Hugh Grant.[5] In 1994, as Grant became the focus of international media attention due to the success of his film Four Weddings and a Funeral,[6] Hurley accompanied him to the film's Los Angeles premiere in a plunging black Versace dress held together with gold safety pins, which gained her instant media attention.[7]

Elizabeth Hurley was born on 10 June 1965 in Basingstoke, Hampshire, as the younger daughter of Angela Mary (née Titt) and Roy Leonard Hurley.[8] Her father was a major in the Royal Army Educational Corps;[9][10] her mother was a teacher at Kempshott Junior School. She started teaching at Holy Child School, Sonipat in 2009.[8] She has an older sister, Kathleen[10] ('Kate'), and a younger brother, Michael James Hurley.[11]

Aspiring to be a dancer as a young girl, she took ballet classes and later spent three years studying dance and theatre at the London Studio Centre. She was expelled from the school in 1986.[12] Hurley attended Harriet Costello School[13] in Basingstoke, and while in her teens she became involved with punk fashion, dyeing her hair pink and piercing her nose.[4] "When I was 16 - this was about 1981, 1982 - the thing to be in Basingstoke, the suburb I grew up in, was punk," she explained.[14] She also reportedly associated with New Age travellers in her youth.[15]

In 1995, with no prior modelling experience, Hurley was introduced as an Estée Lauder spokesmodel.[1][4] She later recounted, "I was far from an ingénue, having had my first modelling job at 29."[1] Hurley has since featured in ads for Lauder's 'Pleasures', 'Beautiful', 'Dazzling', 'Tuscany per Donna', and 'Sensuous' fragrances as well as participated in campaigns for the company's other cosmetics.[16] She was replaced as the face of Estée Lauder by Carolyn Murphy in 2001. However, she continues to work with the company non-exclusively, signing a contract for the 16th year with Lauder in 2010.[2] In 2005, she modelled for Saloni, Liverpool Department Stores of Mexico, and Lancel. She was part of the seasonal advertising campaigns for Jordache, Shiatzy Chen, Got Milk?, Patrick Cox, MQ Clothiers of Sweden, and Lancel in 2006[17][18] and Monsoon in 2007.[19] In 2008, Hurley was unveiled as the seasonal campaign face for Blackglama mink. Hurley has appeared three times on the cover of British Vogue.[20] She is signed to TESS Management in London.[21]

In April 2005, Elizabeth Hurley Beach, her beachwear line that she also models every summer, was launched at Harrods in the UK.[3] It debuted later that year in select Saks Fifth Avenue stores in the United States and other European countries.[22] She told Tatler magazine, "I was on Necker Island for a fashion shoot and even as was lying back in a hammock, he was on the phone, doing deals, managing his empire. But then I thought I am never going to have even a holiday home, let alone an island, unless I start a business that I can do without disrupting Damian's school days."[23] In May 2008, Hurley designed and modelled a capsule collection of 12 swimsuits for the Spanish clothes brand MANGO.[24]

Hurley made her first film appearance in Aria (1987).[8] She subsequently appeared in the movies Passenger 57, EDtv, Bedazzled, Serving Sara and Dangerous Ground. In 1997, she received her first and only acting award, the ShoWest Supporting Actress of the Year, for her performance in the spy spoof Austin Powers: International Man of Mystery.[4] When Hugh Grant founded and became the director of Simian Films in 1994, Hurley was credited as one of the producers for the company's two Grant vehicles, Extreme Measures (1996) and Mickey Blue Eyes (1999).[25] In 2000, she was publicly criticised for breaking a five-month acting strike to film an Estée Lauder advertisement, for which she was fined $100,000 (£70,000 in 2000) by the Screen Actors Guild and labelled "Elizabeth Scably" by protesters.[26][27]

Hurley at the launch of Estee Lauder's new fragrance, Sensuous, in July 2008

In 1988, Hurley appeared briefly in a speaking part as a schoolgirl in "Last Seen Wearing", an episode of the detective series Inspector Morse, which was partly filmed at a real school, Reading Blue Coat,[28] Sonning, Berkshire. This is believed to have been her first TV role. In the late 1980s, Hurley portrayed the title character in a five-part television drama, Christabel. After appearing in John Cleese's The Human Face (2001), she hosted the inaugural series of the British reality show Project Catwalk on Sky 1 in 2006. The show drew tepid ratings with only 1% of its target audience tuning into the first few episodes. Hurley was criticised as a presenter by Marcelle D'Argy Smith, a former editor of Cosmopolitan magazine, who described her as "witheringly boring" and added: "Liz Hurley has no fashion experience whatsoever. She wore a dress and has appeared at premieres." GQ's Dylan Jones defended her as someone "immersed in the fashion world as a celebrity."[citation needed] She was dropped after one series because her bosses reportedly believed she was too wooden.[29]

In 2011, Hurley filmed a guest star role in the series pilot of NBC's Wonder Woman as the villain Veronica Cale.[30] The network decided not to pick up the series. In July 2011, it was announced that Hurley would join the fifth season of Gossip Girl for a multi-episode arc. Her character, Diana Payne, was described by the series' executive producers as "a sexy, smart, self-made media mogul and all-around force to be reckoned with", whose "entrance on the Upper East Side will change the lives of all our characters—including, and especially, Gossip Girl herself."[31] In September 2013, she was cast in one of E!'s first two scripted pilots, The Royals,[32] which was picked up in March 2014 and aired in 2015.[33] The drama series, revolving around a fictional British Royal Family and set in modern London, stars Hurley as the matriarch Queen Helena.[33][34]

Hurley supported The Prince's Trust by co-presenting the 2003 Fashion Rocks event in its aid[37] and helping launch the Get Into Cooking youth initiative in 2004.[38] She has also helped raise funds for End Hunger Network,[39] ARK children's charity,[40] and the Shaukat Khanum Memorial Cancer Hospital & Research Centre.[41]

She is a patron of the Elton John AIDS Foundation.[42] She is also patron of the City Veterans Network, a charity based in the City of London that links former members of the Armed Forces to opportunities for rehabilitation and employment.[43]

Hurley is an ambassador for the Hop Skip and Jump children's charity.[citation needed]

Hurley was a struggling actress when she met Hugh Grant in 1987 while working on a Spanish production called Remando Al Viento. While dating Hurley, Grant gained international notoriety for soliciting the services of a prostitute in 1995. Hurley stood by him and accompanied Grant to the premiere of his movie Nine Months.[4] After 13 years together, Hurley and Grant announced an "amicable" split in May 2000.[44] According to The Guardian,[5] Hurley was "then known as 'Hugh Grant's girlfriend,' now known as 'Hugh Grant's former girlfriend,'" due to the high-profile nature of their relationship.[45]

On 4 April 2002, Hurley gave birth to a son, Damian Charles Hurley.[46] The baby's father, American businessman Steve Bing, denied paternity by alleging that he and Hurley had a brief, non-exclusive relationship in 2001.[47] A DNA test, however, established Bing as the child's father.[48] Hugh Grant is his godfather.[49] Hurley is godmother to Patsy Kensit and Liam Gallagher's son Lennon and two of David and Victoria Beckham's sons (Brooklyn and Romeo).[50]

In late 2002, Hurley started dating Indian textile heir Arun Nayar, who has run a small software company since 1998.[51] They married in 2007. The Indian celebrations included a sangeet at Nagaur Fort[52][53] and a reception at Mehrangarh Fort.[54] Hurley lived on a 400-acre (1.6 km2) organic farm in Barnsley, Gloucestershire, with her son and husband.[55]

In December 2010, Hurley announced that she and her husband had separated several months earlier.[56] Hurley filed for divorce on 2 April 2011, citing as the cause Nayar's "unreasonable behaviour",[57] grounds for divorce under English law. The divorce was granted on 15 June 2011.[58] In late 2011, three months after her divorce, Hurley and Shane Warne, a former Australian cricketer, were engaged.[59] On 16 December 2013, Hello magazine reported that the couple had decided to split.[60]

In June 2016, Hurley expressed her support for the UK leaving the European Union and urged the public to vote in the 2016 European Union membership referendum.[62]

In March 2018, her nephew Miles Hurley was stabbed repeatedly in the back by a group of men in Wandsworth, south London. She described it as an "appalling" time for the family, stating: "The deepest wound just missed severing his spine. By some miracle no vital organs were damaged."[63]