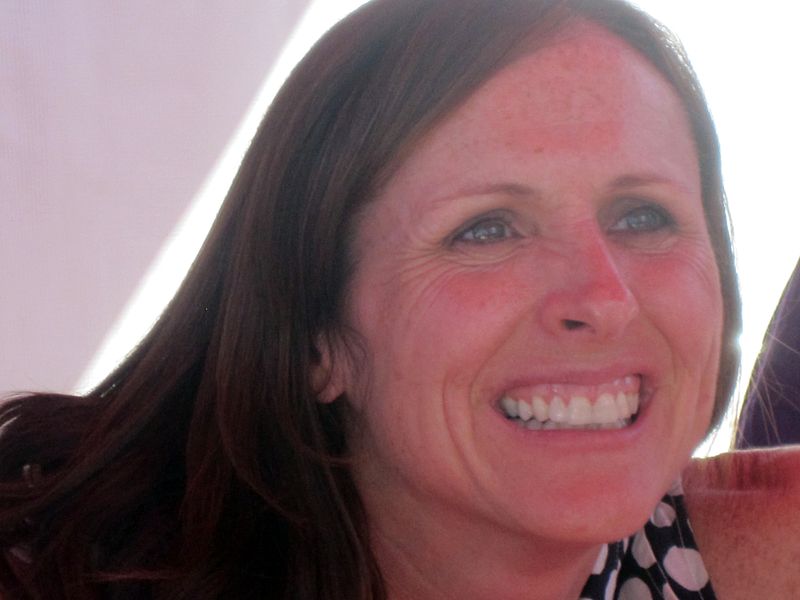 Molly Helen Shannon (born September 16, 1964) is an American actress who was a cast member on Saturday Night Live from 1995 to 2001. In 2017 she won the Film Independent Spirit Award for Best Supporting Actress for her role in the film Other People.

Shannon was born in Shaker Heights, Ohio, on September 16, 1964, to an Irish American Catholic family.[1][2] Her mother, Mary Margaret "Peg" (née Keating), was a teacher, and her father, James Francis Shannon, was a sales manager.[3] Her maternal grandparents were born in Ireland, with her grandfather being from Cloghmore, Achill, Mayo.[4] At age four, Shannon was involved in a car accident which killed her mother, younger sister, and cousin.[5][6][7] Shannon attended St. Dominic School in Shaker Heights for grade school, and Hawken School in Gates Mills, Ohio. She attended New York University, where she studied drama and graduated from NYU's Tisch School of the Arts in 1987.[8]
Read more...

Before Saturday Night Live, Shannon worked as a hostess at Cravings restaurant on Sunset Boulevard and as a food demo girl at Gelson's super market in Marina Del Rey. She auditioned for her first big film role and was cast, playing the supporting part of Meg in the 1989 horror film remake of The Phantom of the Opera, with Robert Englund. In 1991, she had a brief appearance in the second season of Twin Peaks as "the happy helping hand lady", and in 1993, she appeared with minor roles in three episodes of In Living Color, the first in a fake TV commercial with Shawn Wayans playing Chris Rock, the second in a sketch with Jim Carrey, playing LAPD Sergeant Stacey Koon, and third being a parody of Star Trek.

Shannon's major break came in February 1995, when she was hired as a featured player on Saturday Night Live to replace Janeane Garofalo after Garofalo left mid-season due to creative differences. Shannon was one of the few cast members to be kept (along with David Spade, Norm Macdonald, Mark McKinney and Tim Meadows) when Lorne Michaels overhauled his cast and writers for season 21 (1995-96).

She appeared in a 1997 episode of Seinfeld entitled "The Summer of George," where she played Sam, the co-worker who drove Elaine Benes crazy because she did not swing her arms while walking. She also appeared in Sheryl Crow's video for the song "A Change (Will Do You Good)" and played the recurring role of loony neighbor Val Bassett, Grace Adler's nemesis, on Will & Grace, appearing in five episodes over the sitcom's eight-season run. In 1998, she played the role of Emily Sanderson in the film A Night at the Roxbury, featuring Will Ferrell and Chris Kattan who were also cast members of SNL at the time.

In 1999 Shannon starred in Superstar, a feature film based on her most famous SNL character, Mary Katherine Gallagher, the awkward Catholic school student who aspires to be a musical superstar.

During her run on SNL, Shannon also found time to star in the movie Never Been Kissed (1999) and How The Grinch Stole Christmas (2000) and Serendipity opposite Kate Beckinsale (2001). Shannon left SNL in 2001, surpassing Victoria Jackson as the show's longest-serving female cast member (she has since been surpassed by Rachel Dratch, Maya Rudolph, and Amy Poehler). In 2003, she appeared in the romantic comedy My Boss's Daughter and the television remake of The Music Man.

Fritz Chesnut and Shannon in 2009.

In 2004 she starred in a short-lived Fox network television series Cracking Up with actor Jason Schwartzman created by Mike White. That same year, she guest starred in an episode of Scrubs and starred as Mrs. Baker in the film Good Boy!. In 2006, Shannon was featured in the Sofia Coppola directed movie Marie Antoinette as Aunt Victoire. The next year, Shannon guest starred on ABC's Pushing Daisies, and appeared in the film Evan Almighty. Shannon also made a rare move to drama, appearing in Mike White's film Year of the Dog in 2007. In 2013, Shannon joined White again playing his love interest Eileen in the HBO show Enlightened for which she was nominated for an Emmy for outstanding guest actress.

Shannon hosted Saturday Night Live on May 12, 2007, making her the second former female cast member to host (after Julia Louis-Dreyfus) and the first one to have been a cast member for Lorne Michaels (Louis-Dreyfus was a cast member under Dick Ebersol).

In 2008, Shannon starred as Kath in the American version of the hit Australian sitcom Kath & Kim.

In early 2010, Shannon was cast in a recurring role on the Fox television series Glee as Brenda Castle, an astronomy and badminton teacher who has a rivalry with main character Sue Sylvester.[9]

She returned to Saturday Night Live for a special Mother's Day episode on May 8, 2010,[10] and also the October 2010 reunion special "Women of SNL".

Shannon replaced Katie Finneran in the role of Marge McDougall in the Broadway revival of Promises, Promises on 12 October 2010, and remained through its closure on 2 January 2011 along with co-stars Sean Hayes and Kristin Chenoweth.[11]

As of Spring 2012, she has replaced Pauley Perrette as the spokesperson for Expedia.

in 2015, Shannon starred in the Sundance premiere Me and Earl and the Dying Girl directed by Alfonso Gomez-Rejon. She was a guest, along with Denis Leary, on The Tonight Show Starring Jimmy Fallon on June 9, 2015.

In 2016, Shannon co-starred in the HBO comedy Divorce opposite Sarah Jessica Parker and Thomas Haden Church.

Shannon won the 2017 Film Independent Spirit Award for Best Supporting Actress for her performance in the highly-acclaimed drama, Other People. She had two films premiere at the 2017 Sundance Film Festival: The Little Hours and Fun Mom Dinner.

Report a problem
Write to Molly Shannon at FanPal • 2022