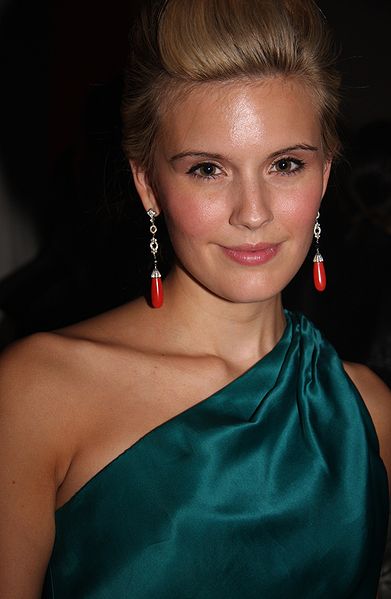 Maggie Grace (born Margaret Grace Denig; September 21, 1983), is an American actress and model. She is best known for her roles as Shannon Rutherford on the ABC television series Lost and Kim Mills in the Taken trilogy. She has also appeared in The Twilight Saga as Irina. Originally from Worthington, Ohio, she went on to earn a Young Artist Award nomination in 2002 with her portrayal of 15-year-old murder victim Martha Moxley in the television movie Murder in Greenwich. In 2004, Grace was cast as Shannon Rutherford in the television series Lost, on which she was a main cast member for the first two seasons, winning a Screen Actors Guild Award shared with the ensemble cast. Leaving the series, Grace was keen to work more prominently in film. She appeared in The Jane Austen Book Club (2007), and opposite Liam Neeson as Kim Mills in Taken in 2008. She reprised the role of Kim in Taken 2 (2012) and Taken 3 (2015).

She played the lead role, Alice, in Malice in Wonderland, a modern take on Lewis Carroll's novel Alice's Adventures in Wonderland. Grace reprised the role of Shannon in two more episodes of Lost, including the series finale. In 2013, she appeared in the sixth season of Californication. She portrayed Faith, a groupie and a muse to the stars, who captures the eye of Hank Moody, played by David Duchovny. She joined the cast of the series Fear The Walking Dead in 2018 as a character named Althea.

Margaret Grace Denig was born on September 21, 1983, in Worthington, Ohio, the daughter of Valinn (née Everett) and Fred Denig, who ran a family jewelry business.[1] Her family lived in a 200-year-old house, the first saltbox house in central Ohio.[2] She attended Worthington Christian Schools from kindergarten through ninth grade and briefly attended Thomas Worthington High School,[3] where she began acting in school plays and community theater,[4] including a 2000 Gallery Players production of The Crucible, at a local Jewish Community Center (though she is not Jewish).[5][6] As a kid Grace was a big reader and a self described "Shakespeare nerd"[7] telling the LA Times that at age 13, she "was really into Jane Austen, kind of like how some kids are into Star Trek.[7]
Read more...

Grace acquired an agent within a week of relocating to Los Angeles and enrolled in acting classes.[6] She landed her first role in Rachel's Room, a 2001 web-based video series about the affairs inside a teenage girl's bedroom that was created by Dawson's Creek executive producer Paul Stupin.[8] Her next role was on the 2002 television series Septuplets, which was cancelled before the first episode had aired.[1] Her breakout role was on 2002's television movie Murder in Greenwich, based on the true story of 15-year-old Martha Moxley's murder. She was nominated for a Young Artist Award for her portrayal of Moxley in the Best Performance in a TV Movie, Miniseries or Special - Leading Young Actress category, but lost to Clara Bryant for Tru Confessions.[9] She went on to feature in minor roles on the television series CSI: Miami, The Lyon's Den, Miracles, Like Family, Cold Case and Law & Order: Special Victims Unit, and the films Twelve Mile Road and Creature Unknown.

Grace at the New York premiere of Won't Back Down, September 2012

In mid-2004, Grace's agent sent her the script for the pilot episode of Lost; she was given the role of Shannon Rutherford after a successful audition.[1] She was nominated in 2005 for a Teen Choice Award for Choice TV Breakout Performance - Female for her role on Lost, but lost to Desperate Housewives' Eva Longoria.[10] She lived in Hawaii during the filming of the show's first season, and signed on to star opposite Tom Welling in The Fog, a 2005 remake of the 1980 horror film of the same name, as a character originally played by Jamie Lee Curtis.[11] Though the filming of Lost was supposed to have ended before The Fog began, the productions coincided due to Lost's extended season finale[4] and Grace flew between the two sets, on the Hawaiian island of Oahu and on Bowen Island in British Columbia, Canada.[2]

After ranking at #27 on Maxim's Hot 100 list of 2005,[12] she returned for Lost's second season. Her character was killed in the season's eighth episode, "Collision", when the series' writers began to feel that the character's "story avenues limited". Executive producer Carlton Cuse said that Grace's departure from the show was "sort of a win-win" as she was eager to enter a full-time career in film.[13] After leaving the series, she nevertheless joined the other principal Lost cast members of season 2 onstage at the 12th Screen Actors Guild Awards where Lost won the award for Outstanding Performance by an Ensemble in a Drama Series.[14]

Variety reported in May 2005 that Grace was in negotiations to play X-Men character Kitty Pryde in the 2006 film X-Men: The Last Stand,[15] but in July, auditions were reportedly being held for her replacement.[16] The role ultimately went to Ellen Page,[17] and Grace later revealed that she had never been contacted about the role and was surprised to read that she was up for the part in question.[18] Grace's next role was in the 2007 independent film Suburban Girl, alongside Sarah Michelle Gellar and Alec Baldwin.[19] In 2007, she starred in The Jane Austen Book Club, based on Karen Joy Fowler's novel of the same name. She is a fan of Jane Austen and had read Fowler's novel when it was released in 2004. When she was given the film's script, she met with the director Robin Swicord, with whom she says she "geeked out", and was given the role of Allegra, an openly lesbian 20-year-old.[20]

After the filming of The Jane Austen Book Club was completed, Grace briefly returned to Hawaii to shoot a guest spot on the Lost season 3 episode "Exposé".[20] She starred in the 2008 thriller film Taken with Liam Neeson, who was at the top of a list of male actors Grace wished to work with that she had written just two months before she was cast.[21] She played the lead in Simon Fellows' 2009 Malice in Wonderland, a modern adaptation of Lewis Carroll's Alice's Adventures in Wonderland.[22] In 2010, Grace starred in the drama Flying Lessons,[23] and appeared opposite Tom Cruise and Cameron Diaz in James Mangold's film Knight and Day,[24] as well as in Faster, with Dwayne Johnson.[25] Grace's busy schedule prevented her from returning as Shannon in "LA X", the season premiere for Lost's sixth and final season,[26] but she eventually returned for the series finale "The End".[27] In September 2010, it was revealed that Grace was chosen to play Irina in The Twilight Saga: Breaking Dawn Part 1 and 2.[28]

In December 2012, it was announced Grace would be making her Broadway debut in Picnic. The play opened for previews on December 14, running at the American Airlines Theatre. Sebastian Stan co-stars with Grace in the Pulitzer Prize winning play.[29]

She also made her first appearance as a guest star in the Showtime Series Californication in January 2013, in which she plays a groupie and muse to the rock and roll world as well as the personal interest of Hank Moody, starring David Duchovny.

In 2018, she joined the cast of Fear the Walking Dead.

While still working on Lost, Grace and Ian Somerhalder adopted a feral cat named Roo which they found "literally dying" in the jungle on the set. She said that the cat is now her "travel buddy."[30] In February 2017, Grace became engaged to Brent Bushnell.[31] They were married on May 28, 2017.[32]

Grace often credits her mother as her source of inspiration. When asked about her closest friend, she said that she and her mother were more like sisters and that she is "lucky to have an exceptionally cool mom."[33] She is a self-proclaimed Anglophile, having written to a pen pal in the Lake District from the age of eight, having first visited England at 13 years of age, and admiring a number of English poets, including William Shakespeare.[34] She calls herself very clumsy, claiming to "trip over my legs all the time,"[35] and was jokingly nicknamed "Maggie Graceless" by one of her former castmates.[36]