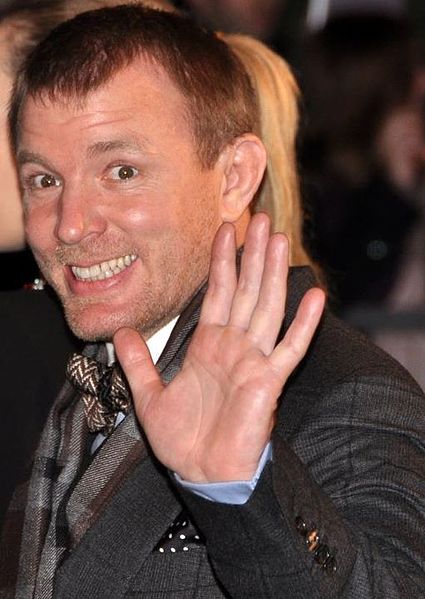 Guy Stuart Ritchie (born 10 September 1968)[1][2] is an English filmmaker, businessman and occasional actor, known for his crime films. He left secondary school and got entry-level jobs in the film industry in the mid-1990s. Ritchie eventually went on to direct commercials. In 1995, he directed his first film, The Hard Case, a 20-minute short that impressed investors who backed his first feature film, the crime comedy Lock, Stock and Two Smoking Barrels (1998). He then directed another crime comedy, Snatch (2000). Ritchie's other films include Revolver (2005), RocknRolla (2008), Sherlock Holmes (2009), and its sequel Sherlock Holmes: A Game of Shadows (2011).

Ritchie was born in Hatfield, Hertfordshire,[2] the second of two children of Amber (née Parkinson) and Captain John Vivian Ritchie (b. 1928), former Seaforth Highlanders serviceman and advertising executive. John's father was Major Stewart Ritchie, who died in France, in 1940, during World War II.[3] John's mother was Doris Margaretta McLaughlin (b. 1896), daughter of Vivian Guy McLaughlin (b. 1865) and Edith Martineau (b. 1866), the latter by whom she shares close common ancestors with Catherine, Duchess of Cambridge.[4] The McLaughlins have a pedigree going back to King Edward I of England.[5][6] Both Richie's parents remarried to prominent individuals. His father's second marriage was to Shireen Ritchie, Baroness Ritchie of Brompton, a former model and later Conservative politician and life peer.[7] From 1973 until 1980, when they divorced, Ritchie's mother was married to Sir Michael Leighton, 11th Baronet of Loton Park.[8] As a divorcée, she is correctly styled as Amber, Lady Leighton.[9]

Ritchie, who is dyslexic, was expelled from Stanbridge Earls School at the age of 15.[2] He has claimed that drug use was the reason for the expulsion; his father has said that it was because his son was caught "cutting class and entertaining a girl in his room."[10]

In addition to his elder sister Tabitha, a dance instructor, Ritchie has a half-brother, Kevin Baynton, who was born to Amber Parkinson when she was a teenager and given up for adoption.[11]

In 1998, Ritchie and his father contacted their friend Peter Morton, of the Hard Rock Cafe chain, wondering if he had any potential investors for a debut film. Morton's nephew, Matthew Vaughn, had been studying film production in Los Angeles. Peter informed Vaughn of Ritchie's new film idea, and Vaughn agreed to produce. Matthew, John, Guy and Peter asked their mutual acquaintance, Trudie Styler, to invest in the production of Ritchie's second film production following his 1995 short The Hard Case, which Styler had seen and decided that co-funding the project would be a worthwhile opportunity. The production of the film, Lock, Stock and Two Smoking Barrels, was completed in about eight months. Released in Great Britain in 1998 to positive reviews, it became an international success. It starred Nick Moran and also introduced actors Jason Statham, Jason Flemyng and Dexter Fletcher to worldwide audiences, while launching a new acting career for former footballer Vinnie Jones. Ritchie was introduced to Madonna, whom he would later wed, when the soundtrack for the film was issued on her Maverick Records label. In 2000 Ritchie won an Edgar Award from the Mystery Writers of America for Best Motion Picture Screenplay. Ritchie created and produced a spin-off television series called Lock, Stock....[12]

Ritchie's second feature film, Snatch, was released in 2000. Originally known as Diamonds, it was another caper comedy, this time backed by a major studio with a cast featuring such major Hollywood names as Brad Pitt, Benicio del Toro and Dennis Farina, along with the returning Statham and Vinnie Jones. Similar to Lock, Stock and Two Smoking Barrels in featuring a complex and inventive storyline in which the characters weave in and out of each other's lives, the film also plays with time as Ritchie had employed to humorous effect in his first feature by depicting particular events from different characters' perspectives: a device which became something of a trademark through many of the director's subsequent films. It currently[when?] has a rating of 73% on Rotten Tomatoes.[13]

Following his marriage to Madonna, Ritchie began focusing his filmmaking on his wife, directing her in both a music video (for the song "What It Feels Like for a Girl", a controversial video that showed Madonna engaging in violent behaviour, directed at men, including T-boning a car with three men in it, tasering and robbing a man at an ATM, scratching a police car and shooting two officers with a water gun, driving her car through a group of men playing street hockey and incinerating a man by throwing a lighter into a pool of gasoline) and a short film, Star, for the BMW films series. Ritchie's next film, also featuring Madonna, was a remake of the 1974 Lina Wertmüller hit Swept Away (also entitled Swept Away). Ritchie cast Madonna as a rich, rude socialite who, after a shipwreck, is trapped on a deserted island with a slovenly Communist sailor who humiliates her. Ritchie renamed the woman Amber Leighton after his mother. This film was both a critical and commercial disappointment.[14]

In 2002, Ritchie conceived a hidden camera show called Swag,[15] for Channel Five in the UK, which turned the table on criminals and opportunists by using stunts to trap them in the act. His next project in 2005, a Vegas-themed heist film entitled Revolver starring Jason Statham, was critically panned in the US and UK.[16][17]

In 2008, Ritchie wrote and directed RocknRolla, a more successful return to crime comedy form with an ensemble cast including Gerard Butler, Tom Wilkinson, Thandie Newton, Mark Strong, Idris Elba, Tom Hardy, and Toby Kebbell. It was generally received well with a 60% rating on Rotten Tomatoes.[18] He also directed in 2008 a commercial for Nike called "Take It To The Next Level", about a young Dutch footballer who signs for Arsenal, showing the progression of his career from his viewpoint, until he makes his debut for the Netherlands. The commercial features cameo appearances from some football players with music by Eagles of Death Metal.[19]

Ritchie's Sherlock Holmes was released on 25 December 2009 with Robert Downey Jr. and Jude Law starring as Sir Arthur Conan Doyle's classic detective and his indispensable friend Dr. Watson in a distinctly comic action-oriented updating. The film received generally positive reviews[20] and grossed more than $520 million worldwide,[21] becoming Ritchie's most successful film financially.[22] The sequel, Sherlock Holmes: A Game of Shadows, was released on 16 December 2011 and earned an even higher worldwide box office of over $545 million.[23]

In June 2012, it was announced that Ritchie would direct an adaptation of Treasure Island by Robert Louis Stevenson.[24] On 29 October that year, he produced a game trailer for Call of Duty: Black Ops II.[25]

Ritchie directed Warner Bros.' The Man From U.N.C.L.E.[26] as a fairly radical remake of the popular '60s spy TV series. Filmed in 2013 in London and Italy,[27][28] the film was not released until August 2015.[29] In January 2014, Warner Bros. set Ritchie to direct King Arthur: Legend of the Sword[30] with Charlie Hunnam playing King Arthur by Ritchie's choice.[31] Initially scheduled to be the first of several in a franchise, the film was released in May 2017 but was a box office bomb, so the sequels were cancelled.[32]

In October 2016, Disney announced that Ritchie had signed on to direct a live-action adaptation of Aladdin.[33]

The Raindance Film Festival announced in August 2017 that it would be honouring Ritchie with its 2nd annual Auteur Award, describing him as a "prominent figure" who breathed "new life into the British film industry" with his "cult crime comedies".[34]

Ritchie and his then-wife Madonna in 2005

Ritchie started training in Shotokan karate at the age of seven at the Budokwai in London, where he later achieved a black belt in both Shotokan and Judo.[35] He also has a black belt in Brazilian Jiu-Jitsu under Renzo Gracie.[36]

On 18 May 2000, Ritchie was arrested by the police for an alleged assault on a 20-year-old man outside the Kensington home he shared with American singer Madonna, on suspicion of causing actual bodily harm.[37] On 22 December 2000, Ritchie married Madonna at Skibo Castle in Scotland.[38] They have a son, Rocco John Ritchie (born 11 August 2000 in Los Angeles) and adopted a Malawian baby boy in 2006, David (born 24 September 2005). Madonna eventually filed for divorce from Ritchie in October 2008, citing irreconcilable differences.[39] On 15 December 2008, Madonna's spokeswoman announced that the singer had agreed to a divorce settlement with Ritchie, the terms of which grant him between £50-60 million ($64-77 million), a figure that includes the value of the couple's London pub and Wiltshire estate in England. This would be one of the largest divorce settlements in British history. [40] Madonna and Ritchie issued a joint statement calling the previous announcement "misleading and inaccurate." The financial details of the settlement remained private.[41] Their marriage was dissolved by District Judge Reid by decree nisi at the clinical Principal Registry of the Family Division in High Holborn, London. Madonna and Ritchie entered into a custody agreement for Rocco and David, then aged eight and three, respectively, and divided the children's time between Ritchie's London home and Madonna's in New York, where the two were joined by her daughter Lourdes, from a previous relationship.[42][43]

In February 2011, a £6m house he owns in London's Fitzrovia was occupied briefly by members of The Really Free School, a squatter organisation.[44][45]

Report a problem
Write to Guy Ritchie at FanPal • 2022