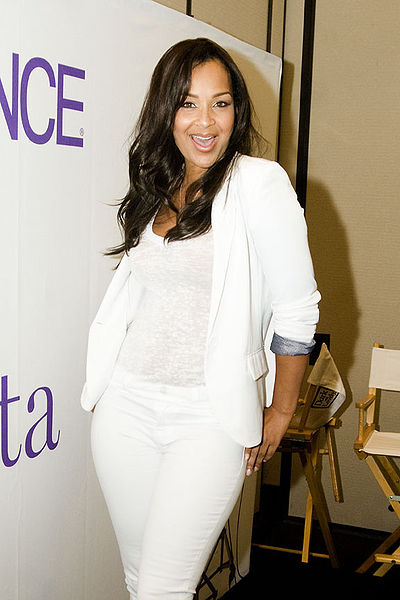 LisaRaye McCoy (born September 23, 1967),[3][4][5][6] known as LisaRaye, is an American actress, model, businesswoman and fashion designer. McCoy is best known for portraying Diana "Diamond" Armstrong in the 1998 film The Players Club, Neesee James on the UPN/The CW sitcom All of Us from 2003 until 2007 and Keisha Greene in the VH1 romantic comedy series Single Ladies which originally aired from 2011-2014.[7] She is also the ex-wife of Michael Misick, the first-ever Premier of the Turks and Caicos Islands.[8][9]

McCoy made her acting debut as the lead in Reasons, an independent film directed by Monty Ross. McCoy is perhaps best known for her role as Diamond in The Players Club, directed and written by Ice Cube.[18] She also appeared in The Wood, opposite Omar Epps, Rhapsody, All About You, and Go for Broke. In 2003, McCoy starred as Neesee James in the UPN/ The CW sitcom All of Us, where she played Duane Martin's ex-wife. The series ended in 2007.[19] McCoy began her career as a model for fashion, but before that she was married to Archie Amerson. She did shows in churches and high schools in her native Chicago. In addition to acting, McCoy has also appeared in dozens of music videos, including "Know Filter 2" by Shleah, Tugoa, T.Lee, "Download" by Lil' Kim, Changing Faces's "Same Tempo", Ginuwine's "Last Chance", Ludacris' "Number 1 Spot", Calvin Richardson's "True Love," Sisqó's "Incomplete", Lil Jon and Ice Cube's "Roll Call", "I Don't Wanna See" and " I Really Want to Sex Your Body," by Link, Tupac Shakur's "Toss It Up", "Never Be The Same Again" by Ghostface Killah & Carl Thomas, ""Unpredictable" by Jamie Foxx, Ooohhhwwweee" by Master P, "Slip N' Slide by Danny Boy, and "Are You in the Mood" by Teddy & Dru Down. She also had a cameo in Seven's music video "Girls" & Jaheim's music video "Back Tight Wit You"[18][20] McCoy also recorded the single "Would You?" with rapper Benzino.[21] In 2005, McCoy launched two fashion lines: Luxe & Romance, a lingerie line that was introduced during New York's Fashion Week, and Xraye, a jeans line for women.[22] In 2011, she launched her jean collection "The LisaRaye Collection" in partnership with PZI Jeans, and a hair line, "LisaRaye Glamour." That same year, she was the Ambassador/Grand Marshal for the 70th Magic City Classic parade and football game in Birmingham, Alabama.

McCoy has a daughter named Kai Morae Pace (b. 1989) from a previous relationship with Kenji Pace. In 1992, McCoy married Tony Martin. They divorced in 1994. In April 2006, McCoy married Michael Misick, who had been elected the Premier of the Turks and Caicos Islands (a position previously known as "Chief Minister of the Turks and Caicos Islands") in 2003. They were married in a lavish ceremony before 300 guests, followed by a three-week honeymoon to Jerusalem, Bali and Dubai.[23] During their marriage, McCoy's title was "First Lady of Turks and Caicos." In August 2008, Premier Misick released a statement announcing that he and McCoy were divorcing.[24] Misick resigned from office in March 2009 after an investigation found "clear signs of corruption" involving selling off public land to fund his own investments. He fled Turks and Caicos, and was eventually arrested in Brazil and extradited back to the islands to stand trial.[25]