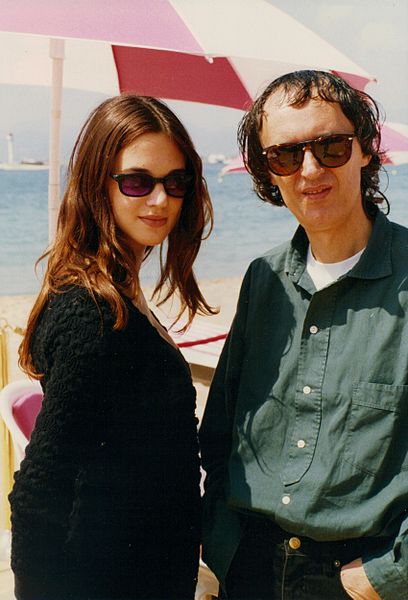 After the Weinstein scandal in 2017, she became a leader of the "#MeToo" women's rights movement.[4] In August 2018, The New York Times detailed allegations that Argento sexually assaulted actor Jimmy Bennett in 2013 when he was 17 and she was 37;[5] Argento denied the allegations.[6]

Her father is Dario Argento, an Italian film director, producer and screenwriter, well known for his work in the Italian giallo genre and for his influence on modern horror and slasher movies.[7] Her mother is actress Daria Nicolodi and her maternal great-grandfather was composer Alfredo Casella.[2]

When Argento was born in Rome, the city registry office refused to acknowledge "Asia" as an appropriate name, and instead officially inscribed her as "Aria" (a name accepted by the city registry). She nonetheless always went by the name Asia, which she later used professionally.[8] Argento has said that as a child she was lonely and depressed, owing in part to her parents' work.[9] Her father used to read her his horror scripts as bedtime stories.[10] At age eight, Argento published a book of poems.[10] At the age of 14, she ran away from home.[9]

I never acted out of ambition; I acted to gain my father's attention. It took a long time for him to notice me - I started when I was nine, and he only cast me when I was 16. And he only became my father when he was my director. I always thought it was sick to choose looking at yourself on a big screen as your job. There has to be something crooked in your mind to want to be loved by everybody. It's like being a prostitute, to share that intimacy with all those people.

In an interview with Filmmaker magazine, she stated that, at one time, "I was sick for a while; I was agoraphobic. I was afraid to go out of my apartment for a long time, I could only go out to work." [13]

Asia Argento began to act at the age of nine,[14] when she was cast in a small role in a film by Sergio Citti.[11] When she was 18, she starred in her father's film Trauma (1993).[13] She received the David di Donatello[15] (Italy's version of the Academy Award) for Best Actress in 1994 for her performance in Perdiamoci di vista, and again in 1996 for Compagna di viaggio, which also earned her a Grolla d'oro award. Argento subsequently began to appear in English-language movies, such as B. Monkey and New Rose Hotel (both 1998). Argento also performed in French-language roles, beginning with Charlotte de Sauve La Reine Margot (1994).[13]

Around the same time, she made her first foray into directing with the short films Prospettive and A ritroso (both 1994) and a documentary about her father (in 1996) and Abel Ferrara (in 1998).[13] In 2000, Argento directed and wrote her first fiction feature film, Scarlet Diva (2000),[13] which her father co-produced.[13] In a review, Filmmaker magazine called the film "riotously funny" and dubbed Argento "a filmmaker with a great degree of promise."[13]

In addition to her cinematic accomplishments, Argento has written a number of stories for magazines such as Dynamo and L'Espresso, while her first novel, titled I Love You Kirk, was published in Italy in 1999. She has modeled for the denim jeans brand Miss Sixty.[19] She became a fan of the band Hondo Maclean when they wrote a track named after her and liked the track so much that she sent them pictures which they used as the cover of their 2003 album Plans for a Better Day.[20]

She appeared in Placebo's music video for "This Picture", and appeared on Placebo frontman Brian Molko's cover version of "Je t'aime... moi non plus". Argento has also starred in Catherine Breillat's period drama The Last Mistress.[21][22] She dubbed the Italian version of the video game Mirror's Edge in the role of the runner Faith Connors, from 2008 to 2009.[citation needed]

Argento has been part of the Legendary Tiger Man's project Femina, which was released on 14 September 2009. She is featured on the song "Life Ain't Enough for You", which was released as a single along with the B-side "My stomach is the most violent of all Italy", in which she also contributes vocals.[23]

In May 2013, Argento's debut album, entitled Total Entropy, was released by Nuun Music.[24]

In 2014, Argento played supporting role in the British film Shongram, a fictional romantic drama based around the factual and historical events of the 1971 Bangladesh Liberation War.[25][26]

Also in 2014, she directed her third feature film, titled Misunderstood (2014), was selected to compete in the Un Certain Regard section at that year's Cannes Film Festival.[27] That year, while promoting the film, Argento stated that she was through with acting and that she had made the decision to focus her energies on writing and directing.[28]

Argento at the 2009 Cannes Film Festival

Besides Italian, Argento speaks English and French, which she learned for her role in Les Morsures de L'Aube.[13]

Her first child, Anna Lou, was born in 2001.[29] Italian rock and roll musician Marco Castoldi (lead singer of Bluvertigo), also known as Morgan, is the father.[10] She named her daughter after her half-sister Anna Ceroli, who died in a motorcycle accident.

Argento married film director Michele Civetta on 27 August 2008 in Arezzo. Her second child, Nicola Giovanni, was born in 2008 in Rome. The couple divorced in 2013.[9] She and her children live in Vigna Clara neighborhood of Rome.[14]

In early 2017, it was reported by several Italian news sources that Argento was in a relationship with celebrity chef and host of Parts Unknown Anthony Bourdain.[30][31][32] Bourdain died of an apparent suicide in Kaysersberg-Vignoble, Haut-Rhin, France, on 8 June 2018.[33]

Argento alleged in an October 2017 New Yorker article by Ronan Farrow that she had been sexually assaulted by Harvey Weinstein in the 1990s. She also said that she had consensual sexual relations with him multiple times over the course of the next five years. She confirmed that a scene in Scarlet Diva where her character is accosted by a movie executive was indeed a reference to Weinstein.[34] Later, Argento stated that the "article did a huge disservice to me and to my truth by simplifying all this," and accused Farrow of "misrepresenting" what happened to her.[35]

After being criticised for her account in Italian media and politics, Argento moved to Germany to escape what she described as a culture of "victim blaming" in Italy.[36]

Argento delivered a speech on 20 May 2018, following the 2018 Cannes Film Festival, calling the festival Weinstein's "hunting ground", alleging that she was raped by Weinstein in Cannes when she was 21. She added, "And even tonight, sitting among you, there are those who still have to be held accountable for their conduct against women."[37]

On 19 August 2018, The New York Times published allegations that Argento sexually assaulted actor Jimmy Bennett, then 17, in a California hotel suite in 2013; she was 37 at the time.[5] Argento had first met Bennett when he played Argento's son in the 2004 film The Heart Is Deceitful Above All Things when Bennett was seven years old.[5] According to Bennett, in their 2013 encounter Argento gave him alcohol, performed oral sex on him and engaged him in sexual intercourse;[5] she later paid him $380,000 as a settlement.[5]

Argento denied the allegation of sexual assault. She said that she never had a sexual encounter with Bennett, and that when he made a request for money to her, her partner Anthony Bourdain paid him to avoid negative publicity.[6] Following Argento's denials, a photograph of her topless in bed with Bennett was published, as well as her alleged admission of sex with him in text messages to Rain Dove.[38] In a letter published online in September 2018, Argento's attorney admits there was a sexual encounter, but claims that Bennett "sexually attacked" Argento.[39] Amid the allegations, it was announced Argento has been dropped as a judge on X-Factor Italy.[40]

In 2012, Argento was highlighted in the retrospective Argento: Il Cinema Nel Sangue at the Museum of Arts and Design in New York City.[41] The retrospective celebrated the influence of the Argento family on filmmaking in Italy and around the world. It highlighted Asia's contribution as well as that of her and mother (Daria Nicolodi), father, grandfather (Salvatore), and uncle (Claudio).[42][43][44]