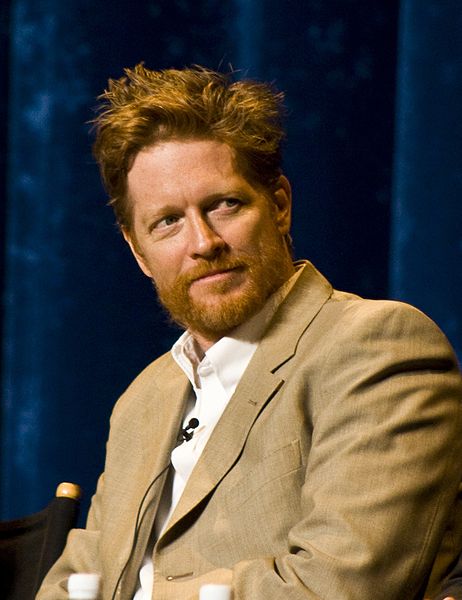 Eric Stoltz (born September 30, 1961) is an American actor, director and producer. He is known for playing the role of Rocky Dennis in the biographical drama film Mask, which earned him the nomination for a Golden Globe Award for Best Supporting Actor in a Motion Picture,[1] and has appeared in a wide variety of films from mainstream fare like Some Kind of Wonderful to independent films like Pulp Fiction, Killing Zoe, and Kicking and Screaming.

In 1985, Stoltz was picked to portray Marty McFly in the movie Back to the Future. Five weeks after filming had begun, Stoltz was fired and replaced by Michael J. Fox. Scenes that had already been filmed were shot again featuring Fox.[2]

Stoltz was born in Whittier, California, the son of Evelyn B. (née Vawter),[3] a violinist and schoolteacher, and Jack Stoltz, an elementary school teacher.[4] He has two sisters, Catherine, an opera singer,[5] and Susan, a writer.[6]

Stoltz was raised in both American Samoa and Santa Barbara, California, where as a child he once earned money playing piano for local musical theatre productions.[7] He attended the University of Southern California, but dropped out after his junior year.[8] He moved to New York in 1981 and studied with Stella Adler and Peggy Feury.[9]

In the 1970s Stoltz joined a repertory company that performed ten plays at the Edinburgh Festival. He returned to the United States in 1979, when he entered USC as a drama student, but subsequently dropped out to pursue film and TV roles.[10]

In 1978, he was cast as Steve Benson in the TV adaptation of Erma Bombeck's The Grass Is Always Greener over the Septic Tank.[11]

Director Cameron Crowe and Stoltz became friends while making Stoltz's first feature film, Fast Times at Ridgemont High (1982), which Crowe wrote and in which Stoltz had a minor role. According to Stoltz, Crowe promised Stoltz a role in all of his future films.[12]

He appeared in each of Crowe's next four films, The Wild Life, Say Anything..., Singles, and Jerry Maguire.

Originally cast as Marty McFly for Back to the Future in late 1984, he was replaced after about a month of filming when Michael J. Fox (the director's first choice for the role) agreed to divide time between the movie and his television sitcom Family Ties.[13] The director, Robert Zemeckis, said that while Stoltz provided an admirable performance, it lacked the precise comedic sense that Zemeckis was seeking.[14] Some of the original footage, where Stoltz does not appear but was on set, was used in the film.[15] Stoltz playing the character was referenced in the 2010 episode of Fringe titled "Peter" when, in a parallel universe, a theater marquee reads "Back to the Future starring Eric Stoltz".[16]

In 1985, Stoltz garnered attention with a Golden Globe nomination starring as Rocky Dennis in Mask. Among other roles in the 1980s, he appeared in the 1987 hit Some Kind of Wonderful, written and produced by John Hughes.[citation needed]

During the 1990s, Stoltz went back and forth between stage, film, and television, appearing in studio and independent films such as Pulp Fiction (1994) and The Waterdance (1992). He also produced the films Bodies, Rest & Motion in 1993, Sleep with Me in 1994, and Mr. Jealousy in 1997.[citation needed]

He continued to appear on the New York stage, both on Broadway (Three Sisters, Two Shakespearean Actors, Arms and the Man) and off-Broadway (The Importance of Being Earnest, The Glass Menagerie, Sly Fox and Our Town). He was nominated for a Tony Award as Featured Actor for his performance as George Gibbs in the 1989 Broadway revival of Thornton Wilder's Our Town.[17]

A performance of this production was featured on Great Performances: Live from Lincoln Center, which received a 1989 Emmy nomination.[18]

On television, he had a recurring role as Helen Hunt's character's ex-boyfriend on Mad About You (five episodes, 1994-1998), spent a year on Chicago Hope (1994), and did some TV and cable movies such as Inside (1996) (directed by Arthur Penn) and The Passion of Ayn Rand (1999), with Helen Mirren. Stoltz received the Indie Sup(Y)port Award at the 1998 Los Angeles Film Festival.[19]

During the first part of the 2000s, he starred with Gillian Anderson in The House of Mirth (2000), based on the novel by Edith Wharton. From 2001 to 2002, he had a recurring role as the English teacher-poet August Dimitri in ABC's Once and Again, wherein Julia Whelan's character, a teenager, fell in love with his character. He directed an episode of the show in 2002.

In 2003, he played his first leading TV role in Out of Order, which was canceled after five episodes. In 2004, he appeared in The Butterfly Effect as a child molester; the following year, he guest-starred in the NBC sitcom Will & Grace as Debra Messing's love interest. He was nominated for a Daytime Emmy for his direction of the cable movie My Horrible Year! (2001).[20] He also directed a short film entitled The Bulls[7] as well as the highest rated episode of Law & Order in 2005, entitled "Tombstone". He appeared in the music video of The Residents' "Give it to Someone Else", featured on The Commercial DVD.[21]

He has contributed essays to the books City Secrets—New York as well as Life Interrupted by Spalding Gray and appears on the children's CD Philadelphia Chickens.[22]

Stoltz starred as Daniel Graystone, inventor of the Cylons, in the science fiction television series Caprica, a prequel set 58 years before the Battlestar Galactica series.

He became a regular director of Glee, directing a total of 12 episodes, including "Nationals", in which the Glee club finally wins the championship.[24]

In 2011 Stoltz was seen back on the silver screen with the film Fort McCoy; he earned accolades for his leading role as a conflicted barber of German heritage forced to suppress his American patriotism after moving his family to a post-World War II military base housing a German POW camp.

Starting in 2014, Stoltz became the producing director of the CBS political drama series Madam Secretary. The following year he became one of its four executive producers, alongside Morgan Freeman and Barbara Hall, and has directed more than ten episodes, as well as starring alongside Tea Leoni in several episodes as her brother, Will Adams.[25]

He has directed many shows on The Learning Channel, TLC Network.