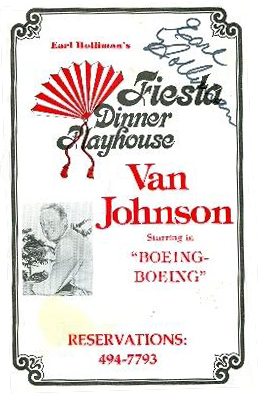 Henry Earl Holliman (born September 11, 1928) is an American actor known for his many character roles in films, mostly westerns and dramas, in the 1950s and 1960s. He won a Golden Globe Award for the film The Rainmaker (1956) and portrayed Sergeant Bill Crowley on the television police drama Police Woman throughout its 1974–1978 run.

Earl Holliman was born on September 11, 1928, in Delhi[1] in Richland Parish, northeastern Louisiana. Holliman's biological father died six months before he was born, and his biological mother, living in poverty with several other children,[2] gave him up for adoption at birth.[1] He was adopted a week after his birth[2] by Henry Holliman, an oil-field worker, and his wife, Velma, who than gave him the name of Henry Earl Holliman.[1] Holliman's early years were normal until his adoptive father died when he was 13.[3]

He saved money from his job ushering at a movie theater and left Shreveport, Louisiana, hitchhiking to Hollywood. Unsuccessful at finding work, he soon returned to Louisiana. Meanwhile, his adoptive mother had remarried, and Holliman disliked his new stepfather.[4] He lied about his age and enlisted in the United States Navy during World War II.[5] Assigned to a Navy communications school in Los Angeles, he spent his free time at the Hollywood Canteen, talking to stars who dropped by to support the servicemen and women. A year after he enlisted, the Navy discovered his real age and immediately discharged him.

Holliman returned home, worked in the oil fields in his spare time,[3] and finished his public education at Oil City High School in Oil City, Louisiana graduating with high honors[3] in 1946. After rejecting a scholarship to Louisiana State University,[3] he re-enlisted in the Navy and was stationed in Norfolk, Virginia.[3] Interested in acting, he was cast as the lead in several Norfolk Navy Theatre productions.[5] When he left the Navy for good, Holliman studied acting at the Pasadena Playhouse.[4] He also graduated from the University of California, Los Angeles.[6]

Holliman played a doomed helicopter crewman in the William Holden war drama The Bridges at Toko-Ri and a gangster's double-crossed thug in The Big Combo. He co-starred with Jack Palance in the crime drama I Died a Thousand Times (1955), a remake of High Sierra. In his award-winning performance opposite Katharine Hepburn and Burt Lancaster in The Rainmaker, he played a rancher's timid son who finally must defy his father to gain self-respect.

He was the soft-spoken son-in-law of a rancher (Rock Hudson) in the epic western saga Giant. Holliman would play many roles set in the American west. He was Wyatt Earp's deputy in Gunfight at the O.K. Corral, co-starring Lancaster and Douglas, and a sniveling coward guilty of murdering and raping the wife of a lawman (Kirk Douglas) in Last Train from Gun Hill. He played a drunken deputy sheriff whose brother Richard Widmark returns to town in a modern-day western, The Trap (1959), and the brother of John Wayne and Dean Martin, out to avenge their murdered father, in a traditional western, The Sons of Katie Elder.

Holliman became known to television audiences through his role as Sundance in CBS's Hotel de Paree, with costar Jeanette Nolan, from 1959 to 1960, and in the title role of Mitch Guthrie with Andrew Prine in NBC's Wide Country, a drama about modern rodeo performers that aired for 28 episodes between 1962 and 1963. He also had the distinction of appearing in the debut episode of CBS's The Twilight Zone, titled "Where Is Everybody?" which aired on October 2, 1959, the same night as the premiere of Hotel de Paree.

From 1974 to 1978, he played Sergeant Bill Crowley opposite Angie Dickinson in the Police Woman series. He co-starred in all 91 episodes of the hit series, playing the police department superior of undercover officer Pepper Anderson. He took part in The Dean Martin Celebrity Roast comedy roast of co-star Dickinson on August 2, 1977.

Holliman continued to appear in television guest roles throughout the 1970s and 1990s. He shared a starring role in the CBS movie Country Gold, filmed on location in Nashville, Tennessee, which also featured Loni Anderson, Linda Hamilton and Cooper Huckabee. He was also a regular celebrity panelist on The Hollywood Squares, where he was recognized for his ability to trick the contestants with believable bluff answers. His most notable role during this period was in the hit miniseries The Thorn Birds with Richard Chamberlain and Rachel Ward. He also took part in the Gunsmoke reunion movie Gunsmoke: Return to Dodge in 1987 as Jake Flagg, having guest-starred on the Gunsmoke TV series with James Arness three times between 1969 and 1973. He was an occasional celebrity on the $25,000 and $100,000 Pyramid game shows between 1983 and 1991. In 1991 and 1994, Holliman had two guest-star roles on Murder, She Wrote, in the Season 7 episode "Who Killed JB Fletcher?" and the Season 10 episode, "Roadkill". In 1996, he was the guest voice of the character Milton in the Season 6 Captain Planet and the Planeteers episode, "Never the Twain Shall Meet".

Later in his career, Holliman starred in the 1997-99 television series Night Man as Frank Domino, a semiretired police officer and protagonist character's father.

Between 1958 and 1963, Holliman found a brief, yet successful, career as a singer and had a record deal with such notable recording studios as Capitol Records, Prep, and HiFi. His songs included: A Teenager Sings The Blues, Nobody Knows How I Feel, Don't Get Around Much Anymore, Sittin' And A Gabbin', If I Could See The World Through The Eyes Of A Child, La La La Lovable, Wanna Kiss You To-Night, I'm In The Mood For Love, We Found Love, Willingly, There'll Be No Teardrops Tonight, and Road To Nowhere.[9]

Earl Holliman photographed at his home in June 2018

Holliman owned the Fiesta Dinner Playhouse in San Antonio, Texas. He occasionally performed at his theater when he was not working in Hollywood, including starring in Same Time, Next Year with Julie Sommars in 1983.[10] The facility closed after 1987. He also appeared in stage productions of the 1973 revival of A Streetcar Named Desire as Mitch[11] and the 1977 Santa Monica Civic production of A Chorus Line as Zach the Choreographer.[12][13] In the late 1970s, he served as the National Honorary Chairman for the Marine Toys for Tots Foundation.[14][15] He is also a vegetarian[16] and is against the use of exploiting animals by using their furs for clothing.[17]

Holliman is a Republican and was supportive of the re-election of Dwight Eisenhower in the 1956 presidential election.[18]

Holliman is also known for his work as an animal-rights activist, including more than 25 years as president of Actors and Others for Animals.[20] He currently resides in Studio City, California, and grants occasional interviews.

For his contribution to the television industry, Holliman has a star on the Hollywood Walk of Fame located at 6901 Hollywood Blvd.[21]

For several years, various reference sources erroneously stated that Earl Holliman's original name was Anthony Earl Numkena.[22][23][24] In fact, Numkena was a child actor, born in 1942, who appeared with Holliman in the films Pony Soldier (1952) and Destination Gobi (1954).