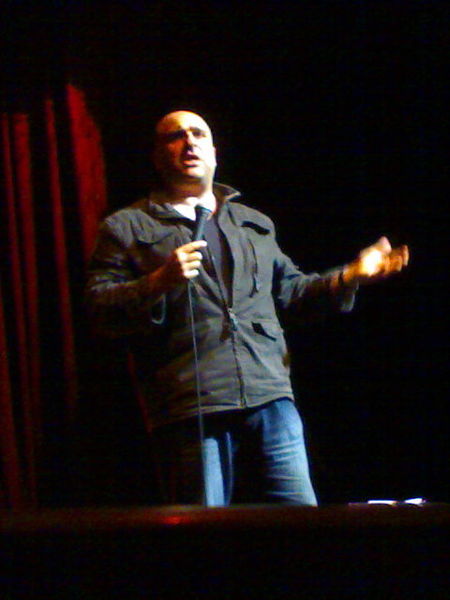 Djalili was born in Chelsea, London, to Iranian Bahá'í parents and is a Bahá'í himself.[2][3] He attended Holland Park School and then the University of Ulster in Coleraine, Northern Ireland, studying English and theatre studies.[4]
Read more...

Djalili performing at the Arts Depot in 2007

The first significant success of his stand-up comedy career was at the Edinburgh Festival Fringe in 1995 with "Short, Fat Kebab Shop Owner's Son", followed by "The Arab and the Jew" with Jewish comedian Ivor Dembina in 1996.[5][6]

He has performed in numerous countries, including Australia, Ireland, Sweden, Belgium, Canada and the United States, where he had his own HBO Special and did 22 episodes of the NBC sitcom Whoopi with Whoopi Goldberg.

He did his part for Comic Relief after the 2004 Indian Ocean earthquake and tsunami and also in 2005 he appeared on the British TV show Top Gear as a celebrity driver. The same year he broke Edinburgh Festival box office records with over 16,500 ticket sales.

In 2006, Sky Television picked him to be the face of their Saturday night film premières, and he also announced a new tour of the UK called 'No Agenda', from January 2007 until March 2007, covering 23 different dates. The No Agenda tour DVD was released in late 2007.

On 18 March 2007, he was voted by the British public as the 60th best stand-up comedian in a Channel 4 programme "The 100 Greatest Stand-Ups". On 26 October 2007, he guest-presented the BBC political quiz show Have I Got News for You.[7] The Omid Djalili Show started on BBC1 on 17 November 2007. The series was a mix of sketches and stand-up material. A second series was recorded in late 2008 and began broadcast on BBC 1 on 20 April 2009. He performed on We Are Most Amused on ITV1 to mark Prince Charles's 60th birthday in 2008.

Djalili has appeared in a number of films, most notably Gladiator, The Mummy, Mean Machine, The World Is Not Enough, Alien Autopsy, Spy Game, Sky Captain and the World of Tomorrow, Grow Your Own, Notting Hill, Mr Nice, Pirates of the Caribbean: At World's End, Sex and the City 2 and provides his voice in Over the Hedge.

He had observed that he usually appears as a generic Middle Eastern background character in many of these films, often commenting that he appears in the James Bond film as the "Second Azerbaijani oil pipe attendant". He appeared as Nasim in the U.S. sitcom Whoopi, starring Whoopi Goldberg, and picked up an international film award for Best Supporting Actor in Casanova, starring alongside Heath Ledger and Jeremy Irons.

On 12 February 2009, producer Cameron Mackintosh announced that Djalili would appear as the second Fagin in the new West End production of Oliver! at the Theatre Royal, Drury Lane, London. Omid took over from Rowan Atkinson, who was contracted until 18 July 2009.[8]

In 2009, Djalili became the voice of Yusuf Amir in the popular gaming series Grand Theft Auto. He took up the role in the Grand Theft Auto: The Ballad of Gay Tony spin-off game. In 2010, he starred in the David Baddiel scripted film The Infidel.

In 2010, Djalili starred in a series of TV and cinema adverts for Moneysupermarket.com.[9]

Djalili appeared in the short-lived NBC sitcom The Paul Reiser Show, which was a midseason replacement for the 2010-11 television season.[10]

Djalili appears in the Sky TV adaptation of Moonfleet shooting in Ireland in 2013.

He appeared in the second season of Thunderbirds Are Go in October 2016 as Horse Williams.[citation needed]

In 2017 Djalili appeared in an acclaimed performance of Fiddler on the Roof at the Chichester Festival Theatre[12].

In 2008, he was an official festival judge for the Noor Iranian Film Festival. In June 2010, Djalili appeared in a Meltdown Festival concert[13] given by the Philharmonia Orchestra at London's Queen Elizabeth Hall, performing the part of the narrator in 'Rubaiyat', a tone poem by American classical composer Alan Hovhaness which sets the words of Omar Khayyám to music. He also appeared on the Graham Norton Show on 17 February 2012, alongside Daniel Radcliffe and Cuba Gooding Jr..

Djalili has won awards for his comedy. These include the EMMA Award, Time Out Award, and LWT Comedy Award for Best Stand-up Comedian, Spirit of the Fringe Award as well as the One World Media Award for his Channel 4 documentary, Bloody Foreigners.

Djalili is a Chelsea fan and has appeared many times in the club's in-house channel, Chelsea TV.[14][15]

Report a problem
Write to Omid Djalili at FanPal • 2022