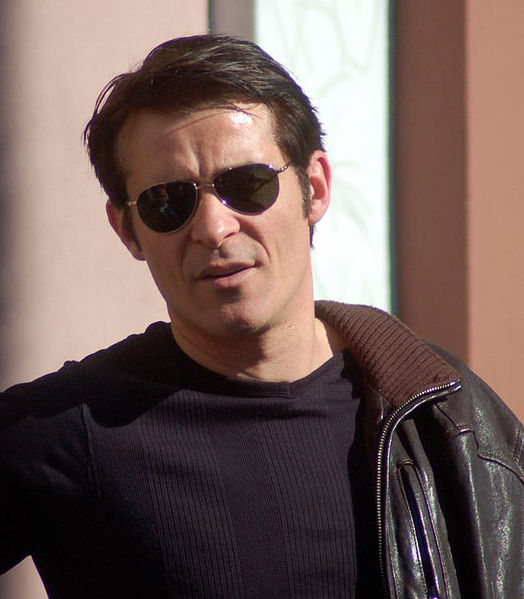 Goran Višnjić (/ˈvɪʃnjɪtʃ/ VISH-nyitch; ; born September 9, 1972) is a Croatian-American actor who has appeared in American and British films and television productions. He is best known in the United States for his role as Dr. Luka Kovač on the NBC television series ER. He currently plays Garcia Flynn on Timeless, also on NBC. He is the son-in-law of Croatian film director and former head of Croatian Radiotelevision (1991-95), Antun Vrdoljak.[2] He moved to the United States in the late 1990s.[3]

Višnjić was born in Šibenik. He has one sibling, an elder brother, Joško. His father, Željko, was a bus driver, and his mother, Milka, worked in a market.[4] He appeared in plays throughout his childhood and made his screen debut at age 16 in the controversial Yugoslav film, Braća po materi (1988), playing a young Ustaša.

In 1990, at the age of 18, Višnjić was drafted to serve his one-year military obligation in the Yugoslavian army, and volunteered as a paratrooper. Only weeks after his military discharge in 1991, as Yugoslavia began to dissolve, he joined the nascent Croatian Ground Army. After leaving the army, he moved to Zagreb to study at the Academy of Dramatic Art.[5][6]

Višnjić was the youngest actor to be chosen for the title role in Shakespeare's Hamlet at the Dubrovnik Summer Theatre Festival. Originally cast as Laertes and understudy to Hamlet, he took over the role when the star dropped out of the production shortly before the first performance. He portrayed the doomed prince from 1994 to 2000, winning several Orlando Awards (the equivalent of the Tony Award).[7] During an episode of ER, he demonstrated his expertise in the part of Hamlet, by reciting an excerpt from the "To be or not to be" soliloquy in Croatian.[8][9]

Prior to ER, he found work in local TV productions and landed a Tuborg beer commercial that aired in Europe.[10] Višnjić also had small speaking roles in films such as The Peacemaker, Committed and Practical Magic. In 1998, he appeared in Madonna's music video "The Power of Goodbye", and had a cameo in the movie Rounders. It was his role as Risto, the Bosnian driver in Welcome to Sarajevo that led then-producer Jack Orman to offer him a role as a doctor to replace the departing George Clooney in the sixth season of ER in late 1999, eventually becoming the show's male lead by the start of season 12, having taken over from the departing star Noah Wyle, who left after the finale of Season 11. By season 14, however, he was only making a limited number of appearances, before completely leaving the show early in season 15 (15x03: "The Book of Abby").[11]

While starring on ER, Višnjić worked on other projects. He starred in the British film Close Your Eyes (2002), alongside Shirley Henderson and Miranda Otto. He co-starred in The Deep End; voiced Soto in Ice Age, and starred in Posljednja volja and Close Your Eyes. In 2004, he starred in the television miniseries Spartacus and the Croatian movie and television series Duga mračna noć. He appeared with Jennifer Garner in Elektra (2005). In 2005, Višnjić was one of four finalists for the role of James Bond, eventually losing out to British actor Daniel Craig, with whom he would appear in The Girl with the Dragon Tattoo.[11]

In 2008, Višnjić starred in the film Helen, alongside Ashley Judd[12] as Judd's character's husband David in the drama, which made its world premiere at the 2009 Sundance Film Festival.[13]

He appeared alongside Carla Gugino in a segment of the 2009 film New York, I Love You, an anthology set in New York. Višnjić's segment was directed by Andrei Zvyagintsev.[14] The segment was cut from the theatrical release of the film[15] but was included in the DVD version.

Višnjić appeared in the historical drama The Courageous Heart of Irena Sendler, about a young Polish woman who saved the lives of many Jewish children in wartime Warsaw, filmed in Riga, Latvia. It was produced for Hallmark Hall of Fame and aired on CBS on April 19, 2009.[16] He completed a role in Mike Mills' independent film, Beginners.[17] In late 2009, he was cast as "Samson" in the miniseries The Deep, shown on BBC One in 2010.[18]

He appeared as Andrija Hebrang in the historical drama Tito on Croatian television. He later appeared in the unsold 2010 pilot of ABC's Boston's Finest, playing a disgraced cop who works with a female officer to solve crimes while trying to clear his name.[19] He recently appeared in the two-episode season three finale of the television series Leverage, as international crime financier Damien Moreau, his first guest appearance on an English-language television program.[11] In 2011, he played Dragan Armansky, the head of a security agency, in The Girl with the Dragon Tattoo and he has signed on to play this role for the entire film trilogy produced and distributed by Sony Pictures Entertainment.[20] He was featured on a four-episode arc of the American television series Pan Am; he played a Yugoslavian attaché to the United Nations.[11]

In 2014, Goran played John Woods, the husband of Molly Woods, in Extant, produced by Steven Spielberg. Although the series was renewed in late 2014, Višnjić left the series early in the second season.[21][22][23]

Višnjić was named People magazine's Sexiest Import in 1999 and "One of TV's Sexiest Men" in the June 5-11, 2005 TV Guide. He was ranked #18 in Croatian-based monthly film magazine Hollywood in Best Croatian Male Movie Stars of All Time list in November 2005. He was also named as the Best Croatian actor in 2004 according to the votes of the visitors of internet magazines, for his role in the movie Duga mračna noć, according to the votes of Croatian newspaper Večernji list.[27]

Višnjić has been active in the American and European animal rights movements, and appeared in photographs alongside his dog Bugsy in PETA's first Eastern European anti-fur campaign.[28] He is currently a representative for both the International Fund for Animal Welfare and Animal Friends Croatia, as well as providing assistance to a number of small animal-rescue organizations in California.[29] He has supported a number of medical institutions in Croatia through the donation of money and equipment. In 2008 he appeared on the nationally broadcast American benefit program Stand Up to Cancer.[30][31][32] He served as one of the faces of ER on NBC's long-running The More You Know campaign, appearing in public service announcements discussing topics such as family time and tolerance.[33]

His wife, Eva (born Ivana Vrdoljak), is an artist and sculptor, and the daughter of film director Antun Vrdoljak, who controversially headed Croatian Radiotelevision from 1991-95. The couple has two adopted children and one biological child.[34][35] They reside in Los Angeles, California and also have a home on the Croatian island of Hvar. Višnjić acknowledged paternity of a daughter, Lana Lourdes Rupić, whom he fathered in 2006, from an affair with a Croatian woman, Mirela Rupić.[36]

In his spare time, Višnjić enjoys swimming, diving and fencing.[37]

In September 2015, Goran and his wife Eva Višnjić announced that they had sold their home in Los Angeles for a sum of about $5 million.[38]

He supported HDZ candidate Mato Franković for Mayor of Dubrovnik in the 2017 elections.[39]