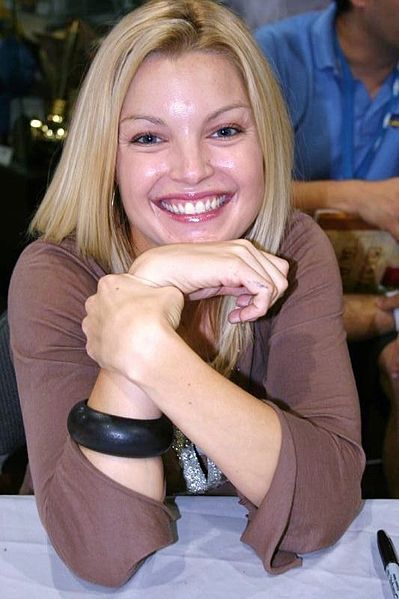 Clare Elizabeth Kramer (born September 3, 1974) is an American actress best known for her starring role of Glory on Buffy the Vampire Slayer and for her role as Courtney in Bring It On. She is a co-founder of GeekNation and hosts the podcast Take Five with Clare Kramer.

Clare Elizabeth Kramer was born in Atlanta, Georgia, to a kindergarten teacher mother and a petroleum geologist father.[1] and spent most of her childhood in Delaware, Ohio. She is of British and German descent. She has a younger sister named Callie; their parents are Terry and Sandy. After graduating from high school, she attended New York University and received a BFA from NYU's Tisch School of the Arts.[2] She moved to Los Angeles in December 1999.

As a child, she was a spokesman and mascot for Wendy's, donning the trademark pigtails accentuated in the company logo.[5]

Kramer's film roles include: The Thirst (as a vampire, this time a former drug-addict); The Skulls III (as a competitive swimmer who follows in her brother's footsteps by joining the title organization); Roger Avary's adaptation of the Bret Easton Ellis novel The Rules of Attraction; and Jessica Bendinger's cheerleading comedy Bring It On. The latter co-starred real-life former cheerleader Kirsten Dunst, and fellow Buffy alumna Eliza Dushku.

Kramer has appeared in guest roles in theater and TV shows, including Tru Calling, which starred Eliza Dushku, and Sabrina, the Teenage Witch, in which she portrayed fictional movie star and shoplifter Babette Storm.

On June 28, 2012, Kramer participated in a Reddit ask me anything (or AMA) in the Buffy the Vampire Slayer subreddit,[6] with most of the questions centered around her time on the show and her role on the show.