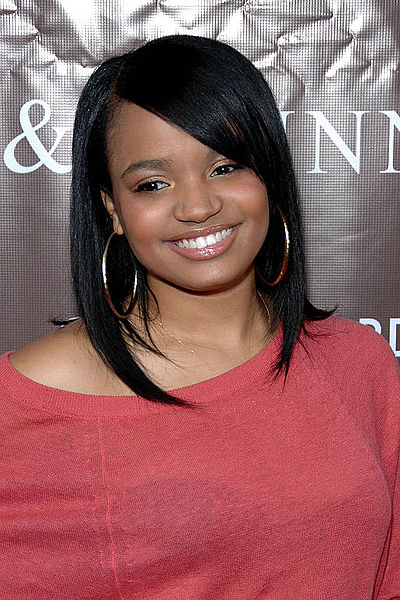 Kyla Alissa Pratt (born September 16, 1986) is an American actress and musician. She is best known for starring as the voice of Penny Proud in the Disney Channel animated series The Proud Family (which lasted for three seasons), and as Breanna Latrice Barnes in UPN's One on One (which lasted for five seasons). After playing the daughter of Eddie Murphy's character in the films Dr. Dolittle and Dr. Dolittle 2, Pratt became the main character in the remake series of the franchise such as Dr. Dolittle 3, Dr. Dolittle: Tail to the Chief, and Dr. Dolittle: Million Dollar Mutts. Pratt has also been in the films Fat Albert, Hotel for Dogs, and The Proud Family Movie. She has also played in the series Let's Stay Together. She has been in a relationship with Robert Ri’chard since November 2017.

Kyla Alissa Pratt[1] is the oldest of five children of Kecia Pratt-McCullar, a schoolteacher, and Johnny McCullar, a semi-professional basketball player.[2][3]

Pratt began acting at age 8, appearing in commercials for an interactive computer game and Nike. In 1997, she appeared in an episode of Walker, Texas Ranger entitled "The Neighborhood", in which she portrayed Kyla Jarvis, a 10-year-old girl who miraculously recovers after accidentally being shot in a drive-by shooting in her gang-ridden neighborhood, and reveals that she saw heaven where she met a guardian angel who gives her an important mission from God. With Walker's help, Kyla Jarvis spreads the angel message of faith and love, uniting her local community into helping clean up their neighborhood and end the gang violence plaguing it. She appeared in an episode of Friends, followed by roles in Smart Guy, Sister, Sister, Family Matters, Lizzie McGuire, Moesha, and The Parkers.[6]

In 2001, she won the role of Breanna Barnes in the UPN series One on One (2001-2006). During the run of One on One, Pratt also voiced Penny Proud, the lead character in the Disney Channel animated series The Proud Family. She also voiced the character for The Proud Family Movie in 2005. In addition to television roles, Pratt has appeared in several feature films, including Love & Basketball (2000) and Fat Albert (2004). She played Maya Dolittle in Dr. Dolittle (1998) and Dr. Dolittle 2 (2001), both of which starred Eddie Murphy. She reprised her role as Maya Dolittle (now the lead character) in the direct-to-DVD releases of Dr. Dolittle 3 (2006), Dr. Dolittle: Tail to the Chief (2008), and Dr. Dolittle: Million Dollar Mutts (2009).[7] In 2009, Kyla Pratt co-starred along Emma Roberts and Jake T. Austin in Hotel for Dogs. Pratt joined the cast of BET's Let's Stay Together in its second season.[8] In February 2014, Pratt was voted #97 on VH1's 100 Greatest Child Stars.[9] In June 2014 she filmed a Freeform pilot called Recovery Road based on Blake Nelson's homonym novel, in which she plays a title role alongside Jessica Sula.[10] The show debuted on Freeform in January 2016, but was cancelled shortly afterwards, in May 2016.[11]

As a member of the Disney Channel Circle of Stars, Pratt performed a cover version of "Circle of Life" that appeared on the DisneyMania 2 album. She also sang "It's All About Me", for the series soundtrack for The Proud Family. She sang "A Dream Is a Wish Your Heart Makes" with the Disney Channel Stars.