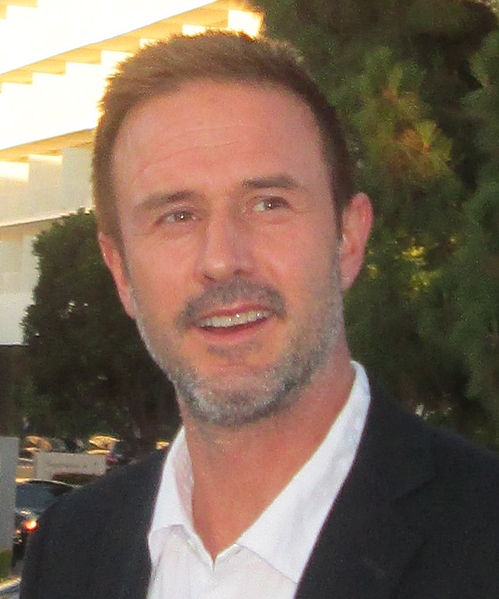 David Arquette (born September 8, 1971[2]) is an American actor, film director, producer, screenwriter, fashion designer and professional wrestler.[3] A member of the Arquette acting family, he first became known during the mid-1990s after starring in several Hollywood films, such as the Scream series, Wild Bill, Never Been Kissed, Buffy the Vampire Slayer, See Spot Run and Eight Legged Freaks. He has since had several television roles, such as Jason Ventress on ABC's In Case of Emergency.

In addition to his acting career, Arquette took a brief foray into professional wrestling in early 2000, competing for World Championship Wrestling (WCW). During his tenure (primarily to promote his upcoming film Ready to Rumble), Arquette became a one-time WCW World Heavyweight Champion, an angle that has been cited as pivotal to the demise of WCW.[4]

Arquette was born in a Subud commune in Bentonville, Virginia.[5] He is the youngest child of Brenda Olivia "Mardi" (née Nowak), an actress, poet, theater operator, activist, acting teacher, and therapist, and Lewis Arquette, an actor.[6][7] Arquette's paternal grandfather was comedian Cliff Arquette. Arquette's mother was Jewish (from a family that emigrated from Poland and Russia),[8][9][10][11] while his father was a convert from Catholicism to Islam; through him, David is distantly related to explorer Meriwether Lewis.[12] His father, whose family's surname was originally "Arcouet", was of part French-Canadian descent.[13] Arquette's four siblings, Rosanna, Richmond, Patricia, and Alexis, all became actors as well.[14] The Arquettes had an unusual upbringing, with a father who occasionally had substance abuse issues.[15][16] Their mother died of breast cancer.[17][18]
Read more...

Arquette appeared in a number of movies in the 1990s, including Buffy the Vampire Slayer (1992), Airheads (1994), and Never Been Kissed (1999). He had guest spots on television shows like Blossom (1992), Beverly Hills, 90210 (1992), and Friends (1996). Arquette achieved his biggest success in the horror/slasher film franchise Scream. It was during the filming of the first film in 1996 that he first met his future wife, Courteney Cox. The couple married in 1999; together, they appeared in a 2003 advertisement for Coke and formed the production company Coquette (both a portmanteau of their last names and a word meaning a flirty woman), which has produced a number of films and television series, including Daisy Does America, Dirt, and Cougar Town. Arquette guest starred alongside Cox on Cougar Town in 2012.

Arquette appeared in the Sega video game ESPN NFL 2K5, voicing himself as a "celebrity adversary" and manager of his own team, the Los Angeles Locos, as well as appearing as an unlockable character in Season Mode. He also appeared in the 2001 EA video game SSX Tricky, as the voice of lead character Eddie. He also starred in See Spot Run in 2001. Arquette starred in the 2007 ABC comedy series In Case of Emergency, which was canceled after one season. Since then, he has appeared in the 2008 film Hamlet 2, and reprised his role in Scream 4, again acting alongside Cox.[19] He appeared alongside his sister in the TV show Medium in January 2011.

He appeared in Rascal Flatts' music video for their song "Why Wait" in 2010. Arquette, a well-known horror fan, made his directorial debut with 2007's The Tripper, and has signed on to direct Glutton, a 3D psychological thriller. The film began shooting in July 2011 in Canada.[20] Arquette appeared on the 13th season of Dancing with the Stars, partnered with two-time champion Kym Johnson. He was eliminated on November 1, 2011. On October 7, 2013, Arquette's new show Dream School, in which he plays a mentor to high-risk kids in L.A., premiered on the Sundance Channel.[21] In 2017, he starred in the reboot of Sigmund and the Sea Monsters as Captain Barnabus.

In 2000, after filming the World Championship Wrestling (WCW) movie Ready to Rumble, Arquette was brought into WCW storylines. He made his first appearance on the April 12, 2000 episode of Thunder, sitting in the crowd before leaping into the ring to take part in a worked confrontation with Eric Bischoff and his New Blood stable.[22] Afterwards, he formed an alliance with Chris Kanyon and then reigning WCW World Heavyweight Champion Diamond Dallas Page, and with their help, he defeated Bischoff in a singles match in the April 24 episode of Nitro.[23] On the following episode of Thunder, Arquette teamed with Page in a match against Bischoff and Jeff Jarrett, with the stipulation that whichever man got the pin would take the championship. Arquette pinned Bischoff again in the match's finish, receiving the WCW World Heavyweight Championship in the process.[24]

During his time as champion, Arquette was mostly used as comic relief. He only appeared on two shows as champion, the May 1 Nitro and May 7 Slamboree pay-per-view. During the former, a vignette was shown, filmed on the set of Arquette's film 3000 Miles to Graceland, which also featured his wife Courteney Cox and their co-star Kurt Russell. In the vignette, Cox informs Russell that Arquette is the WCW World Heavyweight Champion, causing Russell to laugh and walk off and Arquette to chase after him with a steel chair. In another portion of the show, Arquette was seen backstage trembling in fear and attempting to "give back" the championship belt. He did, however, successfully defend the title against Tank Abbott with help from Page.[25]

Arquette held the title for 12 days until the Slamboree pay-per-view on May 7, 2000, when he was booked to defend the championship against Jarrett and Page in a Triple Cage match, the same match featured in the climax of Ready to Rumble. In the end, he turned on Page and gave the victory to Jarrett.[26] After Slamboree, Arquette cut a promo on the May 8 episode of Nitro, explaining that his entire friendship with Page and title run was a "swerve". Page subsequently ran down to the ring and hit him with a Diamond Cutter.[27] Arquette made one final appearance with WCW at the New Blood Rising pay-per-view on August 13, when he interfered in a match between Buff Bagwell and Kanyon.

Arquette was totally against becoming the WCW World Heavyweight Champion, believing that fans like himself would detest a non-wrestler winning the title. Vince Russo, who was the head booker for WCW at the time, insisted that Arquette becoming the champion would be good for the company and for publicity, and Arquette reluctantly agreed to the angle. All the money he made during his WCW tenure was donated to the families of Owen Hart (who died in a freak accident), Brian Pillman (who died from an undiagnosed heart condition), and Darren Drozdov (who became a quadriplegic after an in-ring accident).[28] After World Wrestling Federation/World Wrestling Entertainment (WWF/E) purchased WCW, Arquette's championship run was listed as the top reason for the "failure" of Nitro in a list published by WWE Magazine.[4]

On the December 13, 2010 episode of Raw, Arquette made his WWE debut teaming with Alex Riley in a handicap match losing to Randy Orton.[29][30]

In 2018, years after his controversial WCW title win, Arquette said during an interview at The Wendy Williams Show he has been trolled for 18 years on the Internet and he wants people to have respect for his name in pro wrestling.[31] He began training with professional wrestler Peter Avalon for his return.[32] On July 15, 2018, Arquette made his return to professional wrestling making his debut for Championship Wrestling from Hollywood (CWFH) in a losing effort against RJ City.[33][34]

On September 2, 2018, Arquette teamed with RJ City to defeat James Ellsworth and Frank The Clown in a tag team match at Warrior Wrestling 2.[35][36]

On September 14, 2018, Arquette teamed with Hurricane Helms in a loss to the team of Anthony Battle and Brian Anthony in a tag team match for Northeast Wrestling in Poughkeepsie, New York.[37]

On October 6, 2018, Arquette teamed with RJ City to defeat the team of Halal Beefcake (Idris Abraham & Joe Coleman) in a tag team match at Border City Wrestling's 25th Anniversary show in Windsor, Ontario, Canada. The event was filmed by Impact Wrestling to air as a One Night Only PPV in November 2018.

In May 2007, Image Comics (in conjunction with Raw Studios) published David Arquette's the Tripper, which was adapted for the comic book medium by artist Nat Jones and writer Joe Harris, with whom Arquette shared writing duties. Propr Collection is a clothing line run by Arquette and Ben Harper.[39] Arquette was briefly in a band by the name of Ear2000, who contributed a song to the Scream 2 soundtrack and Scream 3 soundtrack. The group, whose style blended hip-hop and rock, has since broken up. Arquette has also been a part of Washington's Red Museum, and recorded "Post Empire" with the band, which was released in 2011.[40]

Arquette is part owner of Bootsy Bellows, an exclusive nightclub in Los Angeles.[41] The club is named for Arquette's mother, a burlesque dancer who performed by that name.[42]

The band The Black Math Experiment released "You Cannot Kill David Arquette", a tongue-in-cheek song about Arquette's acting and wrestling career. Arquette himself helped promote the band on MTV's Total Request Live,[43][44] and during his promotional tour for The Tripper.[45][46][47] He also used the band's music for the B-roll in the DVD of The Tripper. In South Park: Bigger, Longer & Uncut, when United States and Canada go to war, the countries begin bombing celebrities' houses, the Arquette family being one of them. Arquette has appeared on The Howard Stern Show many times, including multiple times as the show's celebrity intern.

Arquette checked into a rehabilitation center for treatment of "alcohol and other issues" on 1 January 2011.[64] On April 8, 2011, Arquette announced on The Tonight Show with Jay Leno that he had reached the 100-day sober milestone. Later that year, Arquette confirmed on The Tonight Show that he had been sober for over nine months. In June 2012, while in Israel to film an episode of the travel show Trippin, Arquette belatedly celebrated his Bar Mitzvah at the Western Wall.[65] The presiding rabbi was Shmuel Rabinovitch.[66]

Arquette on the set of Scream 4 in July 2010. He also acted in the first three movies.