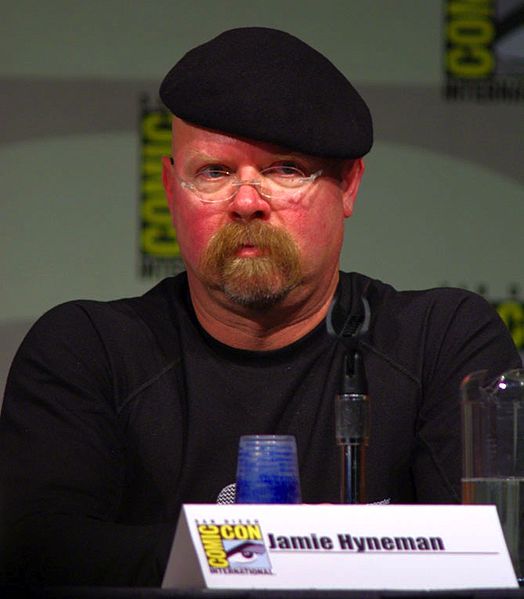 James Franklin Hyneman (born September 25, 1956)[1] is an American special effects expert who is best known as the co-host of the television series MythBusters alongside Adam Savage. He is also the owner of M5 Industries, the special effects workshop where MythBusters was filmed. He is known among Robot Wars devotees for his robot entry, Blendo, which, for a time, was deemed too dangerous for entry in the competition. He is one of the designers of the aerial robotic camera system Wavecam, used in sports and entertainment events.[2]

Hyneman was born in Marshall, Michigan, and raised in Columbus, Indiana. Describing his early life, Hyneman said "I was a problematic kid, to be sure. I left home when I was 14 and hitchhiked all over the country."[3]
Read more...

He earned a degree in Russian linguistics from Indiana University.[4] He also received an honorary Doctor of Engineering degree from Villanova University.[5][6] On November 25, 2011, Hyneman was awarded an honorary doctorate from the University of Twente (Enschede, Netherlands) for his role in the popularization of science and technology.[7] In February 2017 he was named one of the 14 new Honorary Doctors of technology by Lappeenranta University of Technology, Finland. He received the doctorate in June 2017.[8]

Much of the experience Hyneman used on MythBusters came from his time in the visual and special effects professions. Hyneman first broke into the effects industry in the mid 80s as an uncredited special effects crew member on Top Gun. From there, Hyneman spent time as an animatronics technician for films such as Naked Lunch and Flubber, as well as work on the second and third installments of the Matrix Trilogy.[citation needed]

Some of his achievements in commercials include the can-spitting vending machine seen in 7 Up commercials, and his patented two-wheeled football shoe from Nike Lab commercials.[10]

A distinctive part of his appearance is his dark beret, white long-sleeve button-up shirt over a black T-shirt, no-rim glasses, and occasionally, mirrored sunglasses with side anti-glare guards. This, along with his walrus-style mustache and deep voice, are constant subjects for jokes by co-host Adam Savage and other team members.

Hyneman's demeanor on MythBusters is calm, logical and no-nonsense, in stark contrast to Savage's more animated, impulsive and energetic persona.[11] Hyneman is often exasperated by Savage's antics and he sometimes argues with him about the best approach to take. The two often have very different ideas for performing experiments and building devices. Hyneman's ideas tend to be more simplified than his co-host's, and he has a philosophy of reducing a solution to its most basic form wherever possible. This difference has led to numerous competitions between the two presenters when testing myths, such as testing the Goldfish Memory myth and Hoverboard myth.

The two army-junk sellers in The Darwin Awards are portrayed by Savage and Hyneman. They appear during the story of the rocket-car, which they partially reproduced in the MythBusters series' pilot episode and have retested two more times.[12]

He attended the annual skeptics' conference called The Amaz!ng Meeting in 2006.[13]

On May 16, 2010, Hyneman delivered the commencement address and received an honorary Doctorate of Engineering, from Villanova University.[14] Hyneman has been dr.h.c. Jamie Hyneman since November 25, 2011, when he was awarded an honorary doctorate by the University of Twente on the occasion of its 50th anniversary. He was awarded his honorary doctorate together with Adam Savage for their work in popularizing science.[15]

Hyneman made a cameo appearance along with Savage on CSI: Crime Scene Investigation on the May 1, 2008, episode "The Theory of Everything",[16] where they play inspectors each giving thumbs-up after seeing a shirt soaked in pepper spray catch fire when shot by a taser. They went on to test this myth on MythBusters and declare it confirmed with certain types of pepper spray.

He and MythBusters co-host Savage appear as judges on the game show Unchained Reaction, which premiered in March 2012.[17]

Hyneman and Savage have also voiced characters on The Simpsons episode "The Daughter Also Rises" as a parody of themselves, the "MythCrackers", which prompts Bart and Milhouse to experiment in a similar fashion. Hyneman and Savage then reference this episode during the MythBusters Simpsons special.

Both Hyneman and Savage also voiced stormtroopers like office workers in the Phineas and Ferb Star Wars special.[18]

Until 2016 Hyneman was an editor and contributor at Tested.com alongside fellow Mythbuster Adam Savage, and technology reviewer Norman Chan.[citation needed]

In 1984, Hyneman met his future wife, Eileen Walsh, a science teacher, while he owned a sailboat diving charter business in the Virgin Islands.[19][20] Hyneman identifies strongly as both a skeptic[21] and an atheist.[22] He apparently has a mild case of acrophobia (fear of heights), as mentioned in the "Hammer Drop" and "Duct Tape Bridge" episodes of MythBusters.