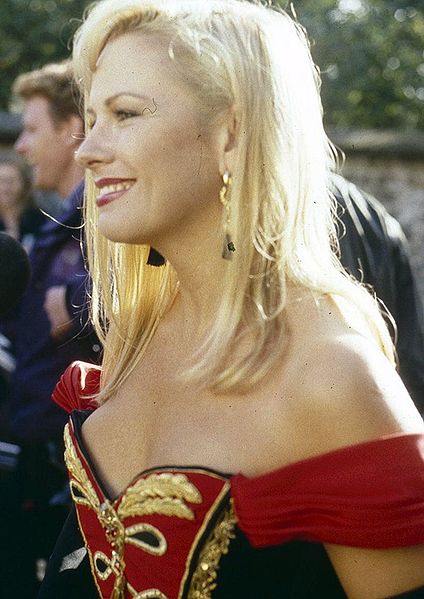 Pamela Helen Stephenson, Lady Connolly (born 4 December 1949) is a New Zealand-born Australian. She is a psychologist, writer, and performer who is now a resident in both the United Kingdom and the United States. She is best known for her work as an actress and comedian during the 1980s. She has written several books, which include a biography of her husband Sir Billy Connolly, and presented a psychology-based interview show called Shrink Rap on British television.

Stephenson had begun acting on television by 1972. She starred during 1973-74 as Julie King in the Australian TV series Ryan. After numerous television and film appearances, including as Josephine in the 1977 ABC production of Malcolm Williamson's opera The Violins of Saint-Jacques, and Wendy in the 1977 New Avengers episode The angels of death. She had another recurring role as Iris Reade in the UK series Funny Man (1981). She made a TV comedy sketch show pilot, "Stephenson's Rocket", which was not taken up.[1] Among her first appearances in the UK, she joined the live on-stage team at The Comic Strip led by Rik Mayall, Peter Richardson and Alexei Sayle at the Raymond Revuebar in Soho. This was not a happy experience, according to an interview she gave in 2014: 'Doing stand-up was like a war with everyone playing this game of "I can be funnier than you". You had to come in like a boxer with lots of chutzpah and try to scare the pants off people. I remember envying Rik and the other boys for being guys, because The Comic Strip was really hard: I was one of the few women doing it and the audience sounded like they were out for blood, so the boys would take their trousers down on stage and other stuff that I couldn’t possibly do.'[2]

Probably her most widely recognized television role was in the classic 1980s UK comedy television sketch show Not The Nine O'Clock News, alongside Rowan Atkinson, Mel Smith and Griff Rhys Jones (1979-82). Her parodies included Kate Bush in a song called "Oh England, My Leotard" (referencing "Oh England My Lionheart"), and Olivia Newton-John in a song called "Typical bloody typical" (referencing "Physical"). She also had a small part in three episodes of the British TV police drama series The Professionals. Her personal contribution as a comedian added to the success of Not the Nine O'Clock News, and led to a collaboration with comedy and satire writers Mike Lepine and Mark Leigh. This spawned a book, How To Be A Complete Bitch, and a board game. In 1982-83, she starred in the West End production of Joseph Papp's version of The Pirates of Penzance.[3][4]

In December 2010, Stephenson competed in the eighth series of the BBC1 television show Strictly Come Dancing, consistently winning praise. She received on 4 December a perfect score of 10 from each of the four judges for her Viennese Waltz, becoming only the eighth celebrity to do so. She then reached the final along with Matt Baker and Kara Tointon. On 18 December, with dancing partner James Jordan, she came third in the competition.[5]

Also in December 2010, Stephenson was the guest on BBC Radio 3's Private Passions, with a choice of music including Bellini, Satie and Debussy.[6] In 2012, Stephenson travelled as a backpacker to Papua New Guinea in the Television New Zealand travel show Intrepid Journeys.

Connolly is a US-licensed psychologist. In her private practice in Beverly Hills, she provided mental health care to adult individuals and couples for a range of psychological complaints. Connolly's professional specialties include human sexuality. She was founder and president of the Los Angeles Sexuality Center, an online sexual research engine which operated for five years until she moved to New York. Connolly is a past Secretary of the American Association of Sex Educators, Counselors and Therapists (AASECT). In 2002 and 2003, she served as conference program co-chair of the annual AASECT Conference. Connolly is also a member of the Society for the Scientific Study of Sexuality, the Harry Benjamin International Gender Dysphoria Association and the International Society for the Study of Women's Sexual Health.

Connolly was an adjunct professor at the California Graduate Institute (CGI—now a part of the Chicago School of Professional Psychology) for six years. She taught Human Sexuality and Sex Therapy, Advanced Human Sexuality and Sex Therapy, and Clinical Practicum in Sex Therapy. She also taught clinical hypnosis at CGI. She received her PhD in 1996, and then in 2009 received an Honorary Doctorate in Science from the Robert Gordon University for her contributions to the field of human sexuality.[7]

Connolly has completed research projects and other field studies on the gender-liminal people of Samoa, Tonga, and India.[8] She has also presented the More4 TV show Shrink Rap, in which she conducted psychologically-based interviews with well-known people, including Salman Rushdie, Carrie Fisher and Robin Williams.

From the 1980s, Stephenson campaigned to raise awareness of food additives and colors, particularly in children's confectionery. She appeared on the daily variety show Midday with Ray Martin (hosted by Ray Martin), and painted a picture using the colors she extracted from children's lollies in order to demonstrate how many are contained in them. She became involved in the Parents for Safe Food Movement. In 2010, Stephenson travelled to the Democratic Republic of Congo with the international medical aid charity Merlin to meet the survivors of sexual and gender-based violence (SGBV).[9]

Stephenson started practising Buddhism in 1979.[10]
She lived with Billy Connolly for ten years and had three daughters; Amy, Daisy and Scarlett, before marrying Billy in Fiji on 20 December 1989.[11]

In the 1987 general election, Stephenson was a candidate in the Windsor and Maidenhead constituency on behalf of the Blancmange Throwers Party[12][13] - she came sixth with 328 votes.

In late 2004, she sold her house in Hollywood and spent a year on a sailing cruise around the South Pacific Ocean, following the path of Robert Louis Stevenson and Fanny Stevenson. She said she was inspired by Fanny (also married to a Scotsman) who had convinced her husband to travel to the tropics for the sake of his fragile health. Her travels were documented in her book Treasure Islands. The boat she bought was renamed "Takapuna" after her birthplace.

A year later, she went on another voyage to discover the fate of an ancestor, a sailing captain who had disappeared in the South Seas. The voyage was the subject of a documentary for Australian television, Murder or Mutiny.

Stephenson formed a dance company in collaboration with Brazilian lambazouk dancer Braz Dos Santos, and wrote and produced a dance-drama stage production called Brazouka. Harley Medcalf was lead producer and Arlene Phillips director. The biographical show told the story of Dos Santos and his dancing. Dos Santos also performed in the show. It premiered at the Edinburgh Fringe Festival in August 2014 and toured South Africa and Australia through January 2015.[14][15]

As an author, Pamela Connolly has published seven books. Her biography Billy topped best-seller lists in Britain and several other countries. Head Case describes self-help approaches for a variety of mental health problems. She has been a regular contributor to Psychologies magazine, writes a column on relationships for The Australian Women's Weekly and has a weekly sexual healing column in The Guardian, written under the name Pamela Stephenson Connolly.[16]