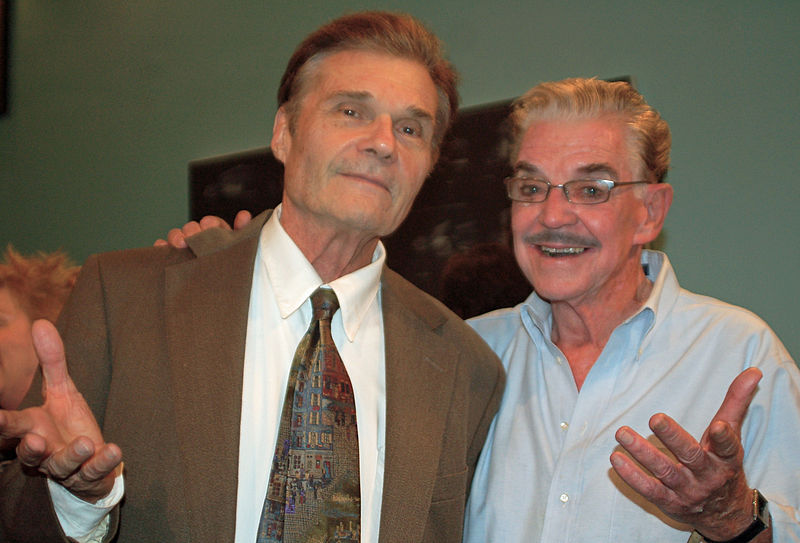 Frederick Charles Willard (born September 18, 1939)[1] is an American actor, comedian, voice actor and writer, best known for his improvisational comedy. He is known for his roles in the Rob Reiner mockumentary film This Is Spinal Tap, the Christopher Guest mockumentary films, Waiting for Guffman, Best in Show, A Mighty Wind, For Your Consideration, Mascots and the Anchorman films. He is an alumnus of The Second City. He received three Emmy nominations for his recurring role on the TV series Everybody Loves Raymond. In 2010, he was nominated for the Primetime Emmy Award for Outstanding Guest Actor in a Comedy Series for his appearances on Modern Family. He was also nominated for the Daytime Emmy Award for Outstanding Talk Show Host for his role as host of What's Hot, What's Not.

Willard's film debut was in the 1967 exploitation film Teenage Mother. Willard reports that the audience at one screening of the film booed when his character interrupted an attempted sexual assault of the female lead character.[8]

One of his earliest jobs was at The Second City, Chicago, where he shared the stage with Robert Klein and David Steinberg. He was a founding member of the improvisational comedy group Ace Trucking Company. Fellow members of Ace included Michael Mislove and Bill Saluga. They performed sketches on The Tonight Show With Johnny Carson over fifty times and appeared regularly on This is Tom Jones.

Willard achieved wider fame in 1977 and '78 as Martin Mull's sidekick and announcer, "Jerry Hubbard", on the Mary Hartman, Mary Hartman spinoffs Fernwood 2 Night, Forever Fernwood, and America 2-Night, which parodied the nighttime talk shows of the day. He was an original cast member of the NBC series Real People in 1979 and again from 1981 to 1983. He played Tom Osbourne in the 1987 Academy Award-winning short film, Ray's Male Heterosexual Dance Hall. From 1987 to 1989, he starred as a bartender/straightman in Sid and Marty Krofft's D.C. Follies, and was host to the Krofft puppets portraying political figures of the time.

Willard hosted the talk show What’s Hot, What’s Not, which aired from 1985 to 1986 and earned him a daytime Emmy nomination for Outstanding Talk Show Host.[9]

In 1990, Willard hosted the cable TV show Access America on the Ha! Comedy Network. As part of that show, he appeared September 21, 1990, on Episode #7 of the cult public-access television show Decoupage with Summer Caprice.[10] In 1995, Willard reunited with his Fernwood co-star playing Scott, the romantic partner of Mull's character Leon Carp, on Roseanne. The couple married in the episode "December Bride," and Scott became a recurring character during the series' final two seasons. That same year, Willard guest-starred in three episodes of Sister, Sister, starring Tia and Tamera Mowry; Willard played Carl Mitushka, a teacher at Roosevelt High who often spoke popular teenage slang terms in order to sound cool to his students. Willard voiced travel agent Wally Kogen in the 1999 episode "Sunday, Cruddy Sunday" for The Simpsons. From 2001 to 2002, he played the father of five children on Maybe It's Me. He has also guest-starred in an episode of The Weird Al Show. He and Mull joined up again for the mockumentary The History of White People in America. He played Mayor Deebs in Roxanne, starring Steve Martin.

Willard has appeared in several Christopher Guest films, such as A Mighty Wind, in which he played "Mike LaFontaine," a character known for his catchphrase, "Eh? Wha' happened?"; Best in Show, in which he portrayed "Buck Laughlin," a dog show announcer who offered up an unending stream of bad jokes and off-color comments; Waiting for Guffman, in which he played "Ron Albertson," a travel agent who performs in amateur stage productions with his wife; This Is Spinal Tap, in which he played a lieutenant on the military base where Spinal Tap play; and For Your Consideration as an obnoxious entertainment television show anchor.[11] For his performance in Waiting for Guffman he received an American Comedy Award nomination and a Screen Actors Guild nomination for Funniest Supporting Actor. He received the Boston Film Critics Award, an American Comedy Award, a Sierra Award and a tribute from AFI for his portrayal as Buck Laughlin in Best in Show. He also appeared in American Wedding, and as KVWN news director Ed Harken in Anchorman: The Legend of Ron Burgundy.

Willard had a recurring role as "Hank MacDougall" on the later seasons of CBS's Everybody Loves Raymond. He was nominated for an Emmy Award for his role in 2003, 2004 and 2005. Willard was also the host of a VH1 documentary series called Totally Obsessed about people obsessed with their hobbies. He appears as "Captain Ribmanman" in Episode 21 of Channel Frederator, a podcast from Kansas. Willard also landed a role on Family Guy as Dave Campbell, the father of a nudist family (first appearing in "From Method to Madness"). It is unclear whether the role will be reprised. Willard also voiced "Officer Brown" in King of the Hill and made an appearance on That '70s Show. Willard appeared in 100 sketches on The Tonight Show with Jay Leno, as a government official, businessman, or other authority figure named Willard J. Fredericks, who is always drinking. In 2006, he voiced Dad in the Academy Award-nominated animated film Monster House. He also hosted Saturday Night Live in 1978 (musical guest: Devo) and appeared twice on MADtv.

He was the voice of a clueless companion to a lazy robot (Martin Mull) in one episode of the series Dexter's Laboratory and guest-starred on the Adult Swim cartoon Tom Goes to the Mayor. He acted in the Cartoon Network movie Re-Animated and played Vala Mal Doran's "father" in an episode of Stargate SG-1 in 2007. He appeared in two episodes of the Adult Swim program Tim and Eric Awesome Show, Great Job!. He has also starred as the "Boogie Man" in an episode of The Grim Adventures of Billy and Mandy and reprised his role in the movie Billy & Mandy's Big Boogey Adventure. His final appearance as "Boogey" occurred in Billy & Mandy: Wrath of the Spider Queen. In 2007, he made a guest appearance on the children's TV series Come on Over. He has also guest-starred on an episode of The Boondocks, providing the voice of "Joe Petto." In 2008 he guest starred on Transformers Animated as the Decepticon arms dealer Swindle.

Willard was cast as a sportscaster in the television series Back to You, which premiered on the Fox Network on September 19, 2007. He played Shelby Forthright, the CEO of the Buy 'n' Large Corporation, in the first ever live-action speaking segments by Pixar in the animated film WALL-E.[12]

Willard completed a sold-out run of Fred Willard: Alone At Last!, advertised as a "one-man show" but actually featuring a cast of ten, and received Los Angeles Artistic Director Awards for Best Comedy and Best Production. Willard has several stage roles to his credit, including Off-Broadway performances in Little Murders, directed by Alan Arkin, and Arf, directed by Richard Benjamin. His regional roles include Call Me Madam in Chicago and the musicals Promises, Promises, with Jason Alexander, and Anything Goes with Rachel York, both in Los Angeles. He starred in Wendy Wasserstein's Isn't It Romantic and off Broadway in Elvis and Juliet.

Willard played Frank Dunphy, father of Phil (Ty Burrell), in several episodes of the show Modern Family.[14] For his performance, he was nominated at the 62nd Primetime Emmy Awards for Outstanding Guest Actor in a Comedy Series.[15] On September 16, 2011, Willard was honored as Pioneer in Comedy at Burbank International Film Festival.[16]

In 2012, he played Al Kaiser in Rob Reiner's film The Magic of Belle Isle. In 2013, he starred in The Birder alongside Tom Cavanagh, a film centered around a mild-mannered birder that seeks revenge on a younger rival, after losing the highly coveted Head of Ornithology position at the National Park.[17]

For his considerable, ongoing dedication to charity works with various nonprofits Big Brothers / Big Sisters, Fred and his wife, Mary, were honored in 2010 with the Golden Star Award. Fred was also honored by Actors and Others for Animals with the Man of The Year Award in 2008, and the couple also works with City of Hope, John Wayne Cancer Society, PETA and dozens more, Fred received a commendation from the City of Los Angeles and Mayor Antonio Villaraigarosa for "outstanding humanitarian and philanthropic work helps to further the goal of making the City of Los Angeles a better place."

On July 18, 2012, Willard was arrested on suspicion of engaging in a misdemeanor lewd act in an adult theater on Santa Monica Blvd and was brought to the LAPD’s Hollywood Station. However, there was no proof of any misconduct and no charges were filed.[20] Despite this, PBS fired Willard from Market Warriors immediately following his arrest, and Mark L. Walberg replaced him on the show.[21] In an appearance on Late Night with Jimmy Fallon shortly thereafter, Willard stated that the incident was "very painful" and "very embarrassing," but that he "did nothing wrong." Willard was subsequently required to take a sex education diversion program.[22]

Willard and Jack Betts in November 2010 Willard at the Farm Sanctuary 25th Anniversary Gala in New York City on May 14, 2011 Willard at "Cats for Cats", August 2011