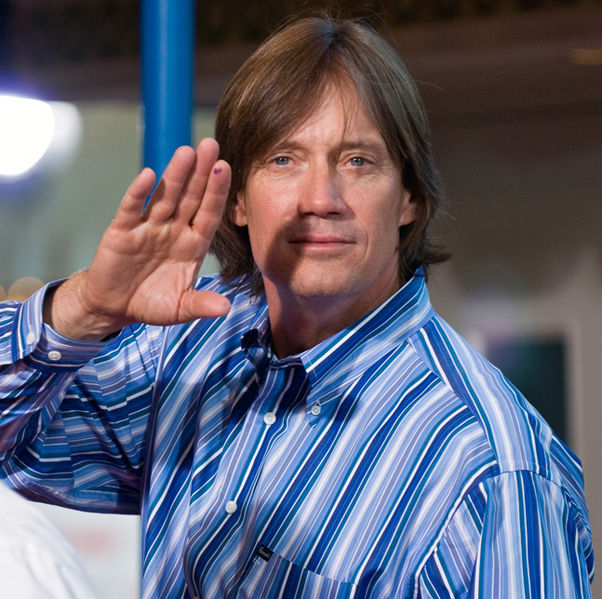 Kevin David Sorbo[1] (born September 24, 1958) is an American actor. He is best known for his starring roles in two television series: as Hercules in Hercules: The Legendary Journeys, and as Captain Dylan Hunt in Andromeda.

Sorbo was born in Mound, Minnesota, where he attended Mound Westonka High School. He is the son of Ardis, a nurse, and Lynn Sorbo, a junior high school mathematics and biology teacher.[1] He is of Norwegian descent.[2] He was raised in a Lutheran family. Sorbo attended Minnesota State University Moorhead, where he double majored in marketing and advertising. To help make tuition, he began to work as a model for print and television advertising.
Read more...

In the mid 1980s, Sorbo travelled around Europe and Australia working in television commercials and worked in over 150 commercials by the early 1990s. One of the popular commercials he appeared in was for Jim Beam bourbon whiskey, known for Sorbo's repeated catchphrase "This ain't Jim Beam".[3] He made his acting debut in 1986 appearing in an episode of the soap opera Santa Barbara. This was followed by guest appearances in television series such as 1st & Ten, Murder She Wrote and The Commish. In 1992, he starred in an unsuccessful pilot for a medical drama series titled Condition: Critical which was not picked up but aired as a television film on CBS. He was considered for and lost out to Dean Cain as Superman in Lois & Clark: The New Adventures of Superman and was a possible contender for the role of Agent Mulder in The X Files which went to David Duchovny.[4][5][6][7][8][9][10]

In 1993, he made his film debut playing a supporting role in Slaughter of the Innocents. In 1994, he got his breakthrough leading role as the Ancient Greek cultural hero Hercules in the television film Hercules and the Amazon Women which aired in April of that year as part of Universal Television's Action Pack. This was the first of five television films which aired that year [11] with the fifth and final film Hercules in the Maze of the Minotaur airing in November 1994. The ratings success of these films paved the way for the commissioning of the television series Hercules: The Legendary Journeys which started airing in syndication from January 1995 and ran for six seasons. The series made Sorbo an international star and was one of the highest rated syndicated television shows at the time.[12] Sorbo also directed two episodes of the series during its run and co-wrote one episode.

The success of the show spawned the popular spin-off series Xena: Warrior Princess starring Lucy Lawless, who had first appeared as Xena in three Season One episodes of Hercules. Sorbo made his first of two appearances on Xena guest-starring in the 1995 Season One episode "Prometheus". In 1998, a spin-off direct-to-video animated film featuring both Hercules and Xena titled Hercules and Xena - The Animated Movie: The Battle for Mount Olympus was released with both Sorbo and Lawless voicing the characters.[13]

Hercules was cancelled midway through the filming of Season Six of which only eight episodes were produced and the final episode aired in November 1999.[14] This was reportedly due to Sorbo declining to extend his contract to continue starring in the series for a further three years.[12] Sorbo would go on to make his final appearance as Hercules in the Xena: Warrior Princess Season Five episode "God Fearing Child" which aired in February 2000.

In between the years playing Hercules, he played his first leading film role in Kull the Conqueror (1997).[15] After Hercules came to an end, Sorbo played the starring role of Captain Dylan Hunt in the science-fiction drama series Andromeda from 2000 to 2005. In 2006, he played a recurring role on the final season of The O.C. and guest-starred in the sitcom Two and a Half Men. In 2007, he starred in the direct-to-video film Walking Tall: The Payback, which was a sequel to the 2004 film Walking Tall. He reprised his role in the second sequel, Walking Tall: Lone Justice which released later that year. He also starred in the Lifetime Channel film Last Chance Café, the Hallmark Channel film Avenging Angel, co-starring his real life wife Sam Jenkins and guest starred as a bounty hunter in the season-two episode "Bounty Hunters!" of the series Psych. He appeared in the 2008 spoof film Meet the Spartans, which was a box office success[16] despite being universally negatively reviewed by critics.[17] He starred in the Albert Pyun directed science fiction vampire film Tales of an Ancient Empire.[18]

He served as executive producer and star of the movie Abel's Field in 2012.[19] In 2012, Sorbo appeared in an episode of Celebrity Ghost Stories to recount an experience he had while in Minnesota shortly after he graduated from college. He and his girlfriend claimed to have seen the ghost of the "Bride of White Rock Lake" - a woman who supposedly died on her wedding day, murdered by a former lover.[20]

Sorbo voiced one of the main protagonists, Prometheus, in the Wii video game The Conduit.[21] Sorbo returned to the role of Hercules in a more sinister portrayal, in the video game God of War III, which was released for the PlayStation 3 in March 2010.[22]

In July 2013, Sorbo, along with his wife, Sam, provided voice over for characters in the video game Cloudberry Kingdom.[23] In 2014, Sorbo co-starred in God's Not Dead, a Christian film in which he portrayed an atheist college professor who requires his students to disown their religions on the first day of his class.[24] He also voiced Crusher in the Skylanders franchise and Retro Hercules in Smite.

In 2017, Sorbo played the ill-fated King Lar Gand of Daxam on the CW series Supergirl. He appeared opposite Teri Hatcher as his wife Queen Rhea—24 years earlier, they were almost cast opposite each other in Lois and Clark before Sorbo lost out to Dean Cain.[25] Cain also appeared in the same series but did not share any scenes with them.

In late 1997 while on a publicity tour for Kull the Conqueror and between the fourth and fifth seasons of Hercules, the newly engaged Sorbo experienced an aneurysm in his shoulder which caused four strokes.[27][28] As a result, he was weakened for the next several years, a condition kept secret from the public while he recovered. During the last two seasons of Hercules (the fifth and sixth, which aired in 1998 and 1999), Sorbo had a reduced filming schedule to accommodate his condition, and more guest stars were featured in the show in order to reduce Sorbo's duties.[29] The strokes, thought to be triggered when chiropractic manipulation of his shoulder released blood clots from the aneurysm, left Sorbo with a permanent 10 percent vision loss, weakness, impaired balance, and migraines.[30] In his 2011 autobiography True Strength, Sorbo revealed the details of his injury and how his wife Sam helped him recover.[31]

On January 5, 1998, Sorbo married actress Sam Jenkins, whom he met the previous year when she had a guest role on Hercules. They have three children: Braedon Cooper (born 2001), Shane Haaken (born 2004), and Octavia Flynn (born 2005).[32] Sorbo is the spokesman and chair of A World Fit for Kids! (AWFFK!), a non-profit organization that trains teenagers to become mentors to younger children.[33]

In 2001, Sorbo was featured on a Celebrity Edition of the game show Who Wants to Be a Millionaire, winning $32,000 after giving Regis Philbin the wrong answer at the $125,000 question; the money was donated to his charity, A World Fit For Kids.

Sorbo is a Christian and attends a nondenominational church.[34] Sorbo believes his religious views have caused Hollywood to limit his career, stating "There's a negativity towards Christians in Hollywood, and a negativity towards people who believe in God."[35] Sorbo considers himself politically independent.[36] As a guest on Stossel, Sorbo said he voted for Ronald Reagan and Bill Clinton. Sorbo endorsed Donald Trump for President, claiming that "Jesus would have voted for Trump."[37]

Report a problem
Write to Kevin Sorbo at FanPal • 2022