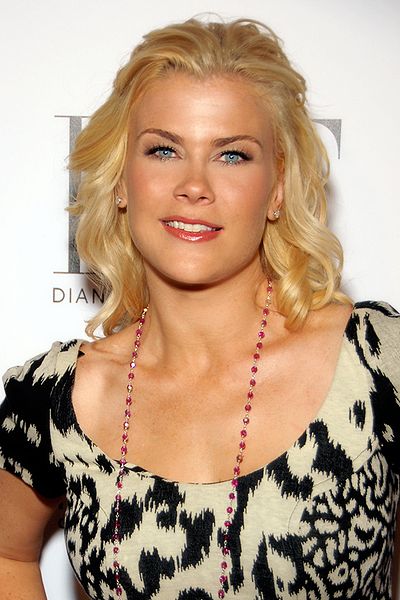 Alison Ann Sweeney (born September 19, 1976)[2] is an American actress, reality show host, director and author. Sweeney is best known for her portrayal of Samantha "Sami" Brady on the NBC soap opera Days of Our Lives,[3] a role she has played under contract with the show since January 6, 1993.[4] In this role, she has earned a Daytime Emmy Award nomination, four Soap Opera Digest Awards and a Fan Voted Daytime Emmy Award.[5] In 2007, she became the host of The Biggest Loser, and left the series at the end of the sixteenth season in 2015.

Her television debut was at age five in a Kodak advertisement.[12] A few years later, she was in the episode "I Can't Help Saying Goodbye" of the horror series Tales from the Darkside, playing a young girl who could sense when others were going to die shortly before their deaths. In 1988, she appeared on the short-lived ABC sitcom Family Man,[14] and the following year, was cast as Christy McCray on Brand New Life, a miniseries from future X-Files creator Chris Carter that aired within NBC's Magical World of Disney in October 1989. The miniseries, which co-starred Barbara Eden as Sweeney's mother and Don Murray as her new stepfather, was considered for pick-up as a stand-alone series beyond its Disney tryout, but the regular series never materialized.

On January 6, 1993, then 16-year-old Sweeney first appeared in the role of Samantha "Sami" Brady in the NBC soap opera Days of Our Lives—a show of which she was a fan.[15]

In the 1990s, Sweeney struggled with her weight. She eventually was a US dress size 12 (UK dress size 16), not obese by medical standards, but still larger than her television peers. She documented all the tabloid talk and personal anguish in her 2004 memoir, All The Days of My Life (So Far).[16]

In 2007, Sweeney took over hosting duties on The Biggest Loser, replacing Caroline Rhea since the fourth season. She was surprised but happy to be offered the role, where she is able to cheer on contestants and share their victories.[15]

In July 2013, Sweeney appeared in Second Chances, a Hallmark Original Movie, alongside Days co-star Greg Vaughan. The movie was filmed before Sweeney and Vaughn became siblings on Days of Our Lives.[23]

On January 20, 2014, Sweeney announced on The Ellen DeGeneres Show that after 21 years of being on the air on Days of Our Lives, she will be leaving the show, to focus on spending more time with her family, as well as more time to work on her other show, The Biggest Loser. She stated in the interview that she would be on the show throughout 2014, and that she would like her character on the show to have a happy ending with a Breaking Bad twist.[24]

On July 9, 2014, it was announced that Sweeney would be joining General Hospital behind the scenes as a director, starting later that month[25] On April 26, 2015, Sweeney announced that she will be returning to Days of Our Lives to be part of the show's 50th anniversary celebrations.[26]

From 2015 to 2017, Sweeney has appeared in the Hallmark Movies & Mysteries film series Murder, She Baked, based on Joanne Fluke's books.

On August 25, 2015, it was announced that Sweeney would not be returning to The Biggest Loser.[27]

Beginning on October 13, 2017, Sweeney will reprise her long-term role as Sami Brady on Days of Our Lives, over 24 years after her first appearance as a teenaged Sami Brady.

Report a problem
Write to Alison Sweeney at FanPal • 2022