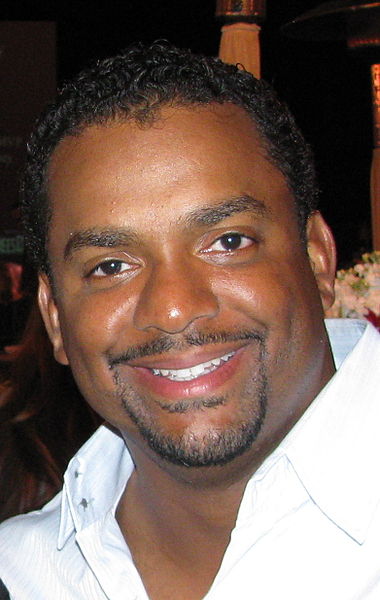 Alfonso Lincoln Ribeiro Sr. (born September 21, 1971) is an American comedian, director, singer, dancer, television personality and actor. He played Alfonso Spears on the sitcom Silver Spoons, Carlton Banks on the NBC sitcom The Fresh Prince of Bel-Air, and Maxwell Stanton on In the House. He is the host of ABC's America's Funniest Home Videos, replacing host Tom Bergeron, who left after 14 years.

Ribeiro hosted the GSN game show Catch 21, the ABC Family show Spell-Mageddon, and the television show Dance 360. He starred in the title role of the Broadway musical The Tap Dance Kid, and took part in the 13th series of the British reality show I'm a Celebrity...Get Me Out of Here!

Ribeiro won Season 19 of Dancing with the Stars with professional partner Witney Carson.[1]

Ribeiro was born in New York City, in the Riverdale neighborhood of The Bronx, to Trinidadian parents, Michael and Joy Ribeiro, who are of African and Portuguese descent. His paternal grandfather was Trinidadian calypsonian Lord Hummingbird (Albert Ribeiro).[2][3]
Read more...

Ribeiro began his career at the age of 8. He first gained recognition in 1983 when he played a leading role in the Broadway musical The Tap Dance Kid. He received positive reviews for his performance and was nominated for an Outer Critics Circle Award.[2] Ribeiro appeared as a dancer in a Pepsi commercial that featured Michael Jackson in 1984.[4] A rumor concurrently spread that Ribeiro had died from snapping his neck while dancing for the commercial.[5] The same year, Ribeiro was cast as Rick Schroder's best friend on the TV series Silver Spoons.[6]

In 1985, Ribeiro appeared as himself in a commercial on MTV, advertising a dance instruction book he authored called Alfonso's Breakin' & Poppin' Book. In 1986, he released a 12-inch rap record called "Timebomb" on Prism Records.

The Fresh Prince of Bel-Air

Ribeiro's breakout role was as Carlton Banks on the NBC sitcom The Fresh Prince of Bel-Air from September 1990 to May 1996. He played the cousin to Will Smith's lead character. The Carlton character was known for frequently dancing to Tom Jones's "It's Not Unusual", a dance move that gained fame as "The Carlton".[7]

Ribeiro competed as one of the celebrity singers on the reality television show Celebrity Duets in September 2006, winning over the runner-up Lucy Lawless.

On May 24, 2013, Ribeiro made a cameo appearance on The Graham Norton Show to perform "The Carlton Dance", with show guests Will and Jaden Smith.[8] In November of that year, Ribeiro took part as a contestant in the thirteenth series of the British reality show, I'm a Celebrity...Get Me Out of Here.[9] He was eliminated from the show on December 5, 2013, finishing in seventh place.

On September 4, 2014, Ribeiro was announced as one of the celebrities who would compete on Season 19 of Dancing with the Stars. He partnered with professional dancer Witney Carson. He became the fourth celebrity dancer in the show's history to receive a 9 from each judge in week one. On November 25, 2014, Ribeiro and Carson won the competition.[10] In September 2015, he returned as a guest judge in week three of Season 21, and he subbed for Tom Bergeron as host the following week.

In October 2018, he was announced as the host of the UK game show Money Tree. On October 12, 2018, Ribeiro was announced to sit in for Bruno Tonioli as guest judge on Strictly Come Dancing for week 5. He will join regular judges Craig Revel Horwood, Darcey Bussell, and Shirley Ballas. Tonioli will return for week 6.

Dancing with the Stars performances

Ribeiro was partnered with Witney Carson for season 19. On November 25, 2014, Ribeiro and Carson were declared the season's champions.

In November 2017, Ribeiro returned to 25th season in Week eight,[22] to participate in a trio Jive with Frankie Muniz and his professional partner Witney Carson.[23]

1 Score given by guest judge Kevin Hart in place of Goodman.

2The American public scored the dance in place of Goodman with the averaged score being counted alongside the three other judges.

3This week only, for "Partner Switch-Up" week, Ribeiro performed with Cheryl Burke instead of Carson.

4Score given by guest judge Jessie J in place of Goodman.

5Score given by guest judge Pitbull in place of Goodman.

Report a problem
Write to Alfonso Ribeiro at FanPal • 2022