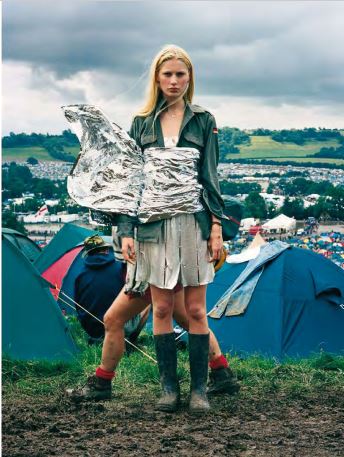 In 1996 Hume was the feature model for Chanel ads.[3] She has modelled for Victoria's Secret.[4] For the March 1996 Gucci presentation of fall and winter fashion collections in Milan, Italy, Hume wore a dress made of white jersey (clothing) with a plunging neckline.[5]

Following a 1997 Paris, France showing of Karl Lagerfeld designs for Chanel, Hume was queried by a Russian TV reporter. He asked her what was the most exciting part of her job. She answered, "Um, the money."[6] She appeared in a bias-cut chiffon gown designed by Donatella Versace at the January 1998 Milan fashion show.[7]

Hume married rocker and actor Donovan Leitch, Jr. in Scotland in 1997. After getting married, they drove all around Bali in a jeep.[8] They separated in 2011 and divorced in 2014. The couple has a daughter named Violet, born March 2004.[9]

Hume and Leitch eschewed city life and relocated to Woodstock, New York. Hume began to study painting and paganism after their move.[4] She is fond of wearing flip flops and Birkenstocks.[8]

Hume attended a Halloween party at Lot 61 in Chelsea, Manhattan, with Leitch and Oliver Stone, in 1998. The Japanese-themed event included an appearance by Leonardo DiCaprio and friends dressed as members of Kiss.[10] Hume arrived in fangs.[11] The night before Halloween in 1999 Leitch and Hume hosted a party at the same venue. Hume was draped in vines and the couple were scantily dressed as Adam and Eve.[12]

She also starred in an interactive fashion art film by Imagine Fashion called, "Decadent Control" with Roberto Cavalli, Eva Herzigová, and Brad Kroenig. The film features fashion from Agent Provocateur and H&M and premiered in March 2011.