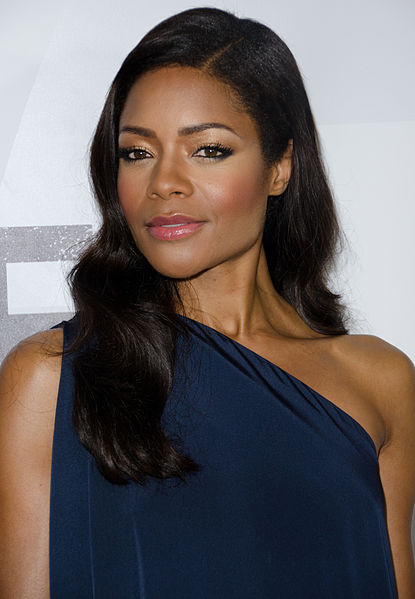 Naomie Melanie Harris, OBE (born 6 September 1976)[1] is an English actress. She started her career as a child actress, appearing in the television series Simon and the Witch in 1987. She portrayed the voodoo witch Tia Dalma in the second and third Pirates of the Caribbean films, Selena in 28 Days Later, and Winnie Mandela in Mandela: Long Walk to Freedom. She garnered attention for her performance as Eve Moneypenny in the James Bond films Skyfall and Spectre.

In 2016, she starred in the critically acclaimed film Moonlight, a performance which earned her several accolades, including Golden Globe, BAFTA, and Academy Award nominations for Best Supporting Actress. Harris was appointed an Officer of the Order of the British Empire (OBE) in the 2017 New Year Honours for services to drama.[2]

Harris was born on 6 September 1976 in Islington, London, where she was raised. Harris' mother, Lisselle Kayla, emigrated from Jamaica to London as a child with her parents, and her father, a fashion designer, emigrated from Trinidad.[3] They separated before she was born, and Harris was raised by her mother and has no relationship with her father. She grew up in humble beginnings, in a council flat in Finsbury Park.[4] Her mother later remarried and Harris has two younger half-siblings.[5] Her mother worked as a screenwriter on EastEnders and is now a healer.[6] Harris attended St Marylebone School in London, before attending Woodhouse College as a 6th form student. She graduated from Pembroke College, Cambridge in 1998 with a degree in social and political sciences. Harris gained her training at the Bristol Old Vic Theatre School.[7]
Read more...

Harris has appeared in television and film since she was nine, including a starring role in the remake of the science fiction series The Tomorrow People.[8] In 2000, she played Susan in The Witch of Edmonton at the Southwark Playhouse. In November 2002, she starred in Danny Boyle's post-apocalyptic film 28 Days Later.[1] In the same year, she starred in the television adaptation of Zadie Smith's White Teeth.[1] Since then, Harris has appeared in Pirates of the Caribbean: Dead Man's Chest, Pirates of the Caribbean: At World's End and Michael Mann's Miami Vice.[1] She also did a comic turn in Michael Winterbottom's indie ensemble piece, A Cock and Bull Story.[9] She starred in Channel 4's adaptation of the novel Poppy Shakespeare, which was first shown on 31 March 2008. She also appeared in BBC's historical drama Small Island in December 2009.[10][11]

She played Elizabeth Lavenza in Danny Boyle's stage production of Mary Shelley's Frankenstein for the National Theatre from 22 February to 2 May 2011.[12] She played the lead role in The First Grader, directed by Justin Chadwick, which was premiered on 18 May 2011 in the Seattle International Film Festival.[13]

Harris co-starred in the 23rd James Bond film, Skyfall, playing Eve Moneypenny.[6] She is the first black actress to play Moneypenny, and is the first Moneypenny to be given a first name.[14] In 2012, Harris was the voice-over for the Boss Nuit Pour Femme commercial starring the actress Gwyneth Paltrow.

Harris portrayed Winnie Mandela in the biopic Mandela: Long Walk to Freedom, based on the book of the same name, opposite the actor Idris Elba.[15] The film was released on 29 November 2013. On viewing the film, Winnie Madikizela-Mandela told Harris that it seemed like she was not acting, but channeling her, and that it was "the first time she felt truly captured on film".[16][17] Harris reprised her role as Moneypenny in the 24th Bond film, Spectre, which was released on 26 October 2015.[18]

In addition to numerous acting awards, Harris was appointed an Officer of the Order of the British Empire (OBE) in the 2017 New Year Honours, for services to drama. She received the honour from Queen Elizabeth II at Buckingham Palace on 23 February 2017.[4]