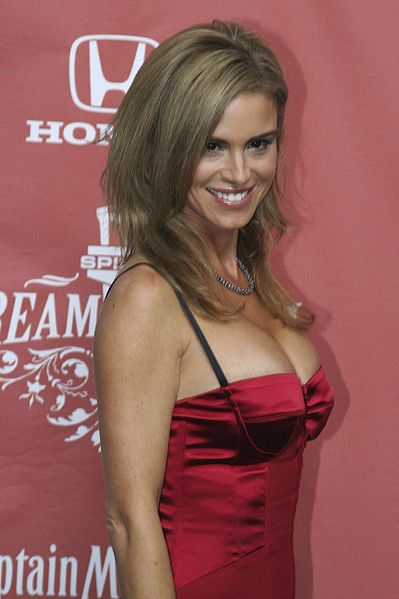 Russell was born in San Diego, California,[2][3] the daughter of Constance (née Lerner) and Richard Lion Russell, a stock analyst. Three of her four grandparents were Jewish.[2] Her maternal grandfather was journalist and educator Max Lerner.[4] Russell wanted to be an actress since the age of eight and started acting in school plays.[5] She appeared in a Pepsi commercial that was taped locally while in high school. After graduating from Mission Bay High School in 1981, she moved to Los Angeles and began taking acting classes before landing her first role. She did a masters program in Spiritual Psychology at the University of Santa Monica and is a certified hypnotist and life coach, also from the University of Santa Monica.[6]
Read more...

Russell's first role was in the 1982 film Let's Do It! That same year, she landed roles on T. J. Hooker, Family Ties, and The Powers of Matthew Star. In 1983, Russell's breakout role came as Jordan Leigh-Jenson in the sex comedy Private School. While shooting the film Avenging Angel, she was offered to audition for the 1985 film Silverado but turned it down. She said in an interview, "Everything happens for a reason. I always believe my career would have been different had I done that part. I can't say if it would have been better or worse. I’ve had a great run".[4] She went on to star in a series of B movies in the 1980s, including Tomboy and Cheerleader Camp. Russell also appeared on TV series such as The A-Team, Murder, She Wrote, 1st & Ten, and an episode of Superboy, which was a reunion with her Tomboy co-star Gerard Christopher.

After a brief retirement from acting, Russell appeared in a small role in Saw III playing John Kramer's ex-wife, Jill Tuck. She went on to star in the sequels, Saw IV, Saw V, Saw VI, and Saw 3D.[7] She played a role in the 2010 film Chain Letter, the SyFy film Mandrake, and My Trip Back to the Dark Side.[8][9]

In August 1988, Russell was engaged to actor Vincent Van Patten, son of Dick Van Patten. They were married nine months later on May 27, 1989, in North Hollywood. Their wedding reception was at Van Patten's father's Sherman Oaks home which was attended by numerous A-list celebrities.[11] They divorced in 2001 and have two sons: Richard Van Patten (March 1993) and Vincent Van Patten, Jr. (September 3, 1995)[12][13] Russell was once engaged to producer Mark Burg.[14]