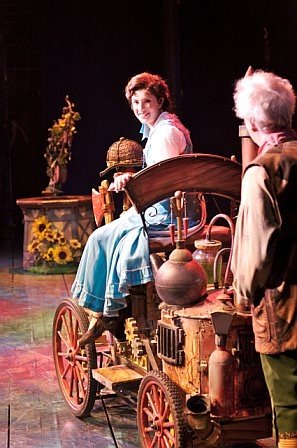 Anneliese Louise van der Pol (born September 23, 1984) is a Dutch-born American actress, singer, and dancer. Following her early career in musical theatre, she was best known for her role as Chelsea Daniels on That's So Raven, a role she reprises on its sequel Raven's Home. Van der Pol also has a career as a singer and has recorded several songs for The Walt Disney Company. She made her Broadway debut in 2007, and appeared Off-Broadway in 2009. She has also acted in the 2010 vampire spoof film Vampires Suck directed by Jason Friedberg and Aaron Seltzer.

Van der Pol was born in Naaldwijk, Netherlands,[2] to Willem van der Pol, who is Dutch and the director of the Physical Plant at the California State University in Fullerton, California, and Dyan Ross, an American from Brooklyn, New York City. Van der Pol's mother named her after Anne Frank after visiting the house where Frank hid (van der Pol's mother is Jewish).[3] Van der Pol has two older sisters, Rachel and Sarah. Van der Pol's family moved to the United States when she was three years old, and she retains dual American and Dutch citizenship.

Van der Pol attended School in Bellflower, California where she began acting in third grade at Washington Elementary School. She attended Bellflower Middle School and High School, then transferred and subsequently graduated from the acclaimed Orange County High School of the Arts in Santa Ana, CA. In 1999, van der Pol played Sandy Dumbrowsky in the Huntington Beach Playhouse revival of Grease, which earned her a Bobbi Award for "Best Actress in a Musical."[4] She played Eva Perón in the Buena Park Civic Theatre production of Evita in 1999 and received positive reviews from the Los Angeles Times.[5] At the age of fifteen, she is also the youngest actress in theatrical history to play the role in a professional production.[6]

Van der Pol subsequently starred as "Laurey" in an Austin, Texas, musical theatre production of Oklahoma! from 2000 to 2001.[6] Her performance earned her both an Austin Critics Table Award nomination for "Best Actress in a Musical" and a B. Iden Payne Nomination for "Best Featured Actress in a Musical".[7] Van der Pol graduated from the Orange County High School of the Arts in 2001.

In late 2001, she was cast as Chelsea Daniels, the best friend of the title character on the Disney Channel's That's So Raven, a role which she portrayed from 2003 until 2007. Just as the first season of "That's So Raven" began, she went back to Austin Musical Theatre to perform in "Celebrate: AMT," a performance highlighting all the shows the company had done up to then. She was a featured soloist. Van der Pol also appeared on the Disney Channel Games as a member of the Red Team; her teammates were Zac Efron, Kay Panabaker, Dylan Sprouse, Shin Koyamada, and Moises Arias. She was originally offered the role of Kim Possible, but chose not to take the part causing the role to be given to Christy Carlson Romano. Though she did voice the character Heather in the episode "And the Mole-Rat Will Be CGI."

Anneliese also had a supporting role in Bratz: The Movie as Avery, a mean popular girl and best friend to the main antagonist.

As the popularity for "That's So Raven" rose, Disney showcased van der Pol's musical talents by signing her for several music compilations. She even did a solo in one of the episodes named "Alone in the Hallways." In 2004, she recorded the song "Over It" for the Disney Channel Original Movie Stuck in the Suburbs which became the soundtrack's lead single. Her second solo recording, called "A Day in the Sun," a cover originally sung by Hilary Duff, appeared on the album That's So Raven Too!. Van der Pol has been associated with several other Disney music projects, including the Elton John song "Circle of Life" for a special edition of The Lion King DVD, "A Dream Is a Wish Your Heart Makes" for the Cinderella: Special Edition DVD, and "Candle on the Water" from Pete's Dragon on DisneyMania 4.

In February 2007, it was announced that van der Pol would be making her Broadway debut as Belle, in Beauty and the Beast. Van der Pol was the musical's 17th (and final) Belle.[8] She played the role from April 3, 2007 to July 29, 2007 as the show reached its 5,464th (and final) performance. During her run as Belle, van der Pol also performed at Bryant Park's Broadway in Bryant Park on July 12, 2007 along Beauty and the Beast co-stars Chris Hoch and Jeanne Lehmann, performing songs from the show.[9] Prior to Beauty's final show, van der Pol appeared on Live with Regis and Kelly for a small interview discussing her Broadway debut and experiences with the show. She also discussed the origins of her name, and performed Beauty 's "A Change in Me."[10]

In May 2008, it was revealed that van der Pol would play the role of Kathy in the new musical, Vanities, A New Musical.[11] She originated the role of Kathy during the musical's Broadway previews in Pasadena, California from August 22, 2008 to September 28, 2008.[12] Originally, the musical was scheduled to begin performances on Broadway February 2, 2009 at the Lyceum Theatre with an official opening on February 26, 2009 but the show's Broadway run was postponed due to the economic turmoil in the US and to focus on the future of the musical.[13] The show then made its New York City debut Off-Broadway at the Second Stage Theatre on July 2, 2009 in previews, and officially opened on July 16, 2009. Performances continued through August 9, 2009.[14] On August 21, 2009, she started recording the Original Cast Album for the musical alongside Lauren Kennedy and Sarah Stiles.[15] The album was later released with Sh-k-Boom Records on December 15, 2009.[16]

As of July 2009, she stated she had received her fourth call-back for the role of Glinda in Wicked on Broadway.[17] Van der Pol appeared in a twelve part Jewish miniseries revival of Shalom Sesame (the Jewish version of Sesame Street). The series premiered during the Hanukkah holiday in December 2010.[18][19][20]

In September 2009, van der Pol starred as Esther Smith in the Theatre Under The Stars production of Meet Me in St. Louis that had a limited run from September 29 to October 11, 2009.[21][22] In December 2009, van der Pol made a guest appearance on The Battery's Down, as Rhonda Busby Smith. The episode premiered on December 1, 2009 on YouTube, where the web-series ran for two seasons.[23]

Van der Pol starred in Jason Friedberg and Aaron Seltzer's spoof film, Vampires Suck, based on the Twilight series. Van der Pol plays the role of Jennifer, Becca's new best friend.[24] The film's trailer exclusively premiered on Break.com on July 7, 2010 featuring Anneliese's character introducing the cast of Jersey Shore. To promote the film, van der Pol made appearances during New York Comic Con weekend for meet-and-greets with fans and to join a live discussion panel for Vampires Suck, along with co-star Matt Lanter.[25] She also participated in a fashion pictorial tribute to teen films for Zooey Magazine. The pictorial was shot by David Nguyen and paid tribute to Pretty Woman, Romy and Michele's High School Reunion, 10 Things I Hate About You, The Princess Diaries, & Legally Blonde.[26]

Van der Pol appeared in the thriller film, Cats Dancing on Jupiter, alongside Amanda Righetti and Jonathan Bennett.[27] Van der Pol returned to television as a guest star in NBC's television series, Friends with Benefits. Van der Pol also returned to the Disney Channel in a guest starring role on Shake It Up, as Ronnie, a former dancer of Shake It Up Chicago! The episode, "Reunion It Up!" premiered on April 10, 2011.[28]

Van der Pol had been cast as "Fiona MacLeod" in Arthur Kopit and Anton Dudley's "A Dram of Drummhicit", a Scottish play presented by La Jolla Playhouse.[29] The Scottish play started previews May 17, 2011 in San Diego.[30] On April 24, van der Pol announced that she would not be continuing with the production, due to artistic differences between herself and the play's director.[31]

From April to May 2012, she starred as Marian Almond in the Pasadena Playhouse production of The Heiress.[37]

She played the lead role in the Arizona Theatre Company's production of Paul Gordon's new musical, Emma, which ran from December 1, 2012 to January 20, 2013.[38] She returned to the Arizona Theatre Company in Stephen Wrentmore's production of The Importance of Being Earnest as Gwendolyn Fairfax. The show ran in Tucson from September 14, 2013 through October 5, 2013 and in Phoenix from October 10, 2013 through October 27, 2013.[39]

Van der Pol was arrested for DUI in Los Angeles on July 10, 2006. She had a blood-alcohol level of 0.19, more than twice the legal limit in California. Police said she swerved and hit a parked car, which caused the parked car to hit two others. Van der Pol later pleaded no contest to two misdemeanors. She was sentenced in 2007 and was ordered to go on probation for 36 months, as well as pay fines and assessments, and attend an alcohol education program. The probation ended in 2010.[46]