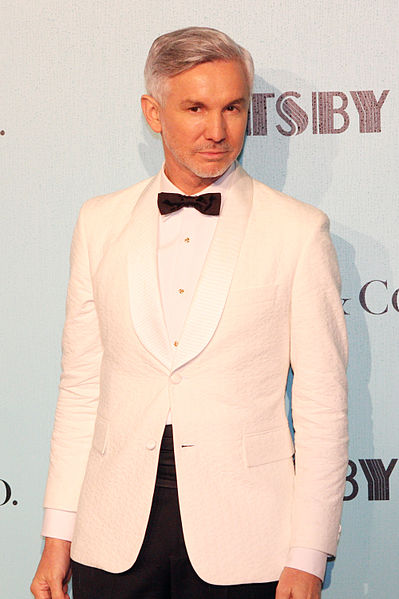 Baz Luhrmann (born Mark Anthony Luhrmann, 17 September 1962) is an Australian writer, director, and producer with projects spanning film, television, opera, theatre, music, and recording industries. He is regarded by many as a contemporary example of an auteur[2] for his distinctly recognizable style and deep involvement in the writing, directing, design, and musical components of all his work. He is the most commercially successful Australian director, with four of his films in the top ten highest worldwide grossing Australian films of all time.[3][4]

On the screen he is best known for his Red Curtain Trilogy, comprising his romantic comedy film Strictly Ballroom (1992), the romantic tragedy William Shakespeare's Romeo + Juliet (1996), and Moulin Rouge! (2001). Following the trilogy, projects included Australia (2008), The Great Gatsby (2013), and his television limited series period drama The Get Down for Netflix. Additional projects include stage productions of Giacomo Puccini's La bohème for both the Australian Opera and Broadway and Strictly Ballroom the Musical. Luhrmann is equally known for his Grammy-nominated soundtracks for Moulin Rouge! and The Great Gatsby, as well as his record label House of Iona, a co-venture with RCA Records.[5] Serving as producer on all of his musical soundtracks, he also holds writing credits on many of the individual tracks. His album Something For Everybody features music from many of his films and also includes his hit "Everybody's Free (To Wear Sunscreen)".

Luhrmann's influence has extended outside the traditional realm of media and entertainment. Deeply involved in the fashion and art worlds, Luhrmann's No. 5 the Film for Chanel not only holds a Guinness World Record for the highest budget for an advertising commercial ever produced,[6] but pioneered the now commonplace genre of fashion film and branded content. Luhrmann works closely with the Metropolitan Museum of Art's Anna Wintour Costume Center, having chaired its famous annual gala as well as producing a short film for the museum, celebrating Miuccia Prada and Elsa Schiaparelli.[7] More recently he and wife Catherine Martin have adapted their distinctive style for projects in events, retail, architecture and design with Barneys New York[8] and developer and hotelier Alan Faena.[9][10]

Luhrmann received the nickname "Baz" from his father Leonard, given to him because of his afro hair style, the name coming from the English Basil Brush.[15] While still in high school, Luhrmann changed his name by deed poll to Bazmark, joining his nickname and birth name together. In 1980 Luhrmann graduated high school and in the same year was cast opposite Judy Davis in the Australian film Winter of Our Dreams.[16] In 1982 using the money he had earned from film and television experience he funded his own theatre company, The Bond Theatre Company, with future friends and collaborators, Nelly Hooper and Gabrielle Mason. The company performed at the Pavilion at Sydney's Bondi Beach. At the same time he conceived and appeared in a controversial television documentary, Kids of the Cross, where Luhrmann, embedded as a character, lived with a group of street kids.[17] In 1983, he began an acting course at the National Institute of Dramatic Art. He graduated in 1985 alongside Sonia Todd, Catherine McClements and Justin Monjo.[18] On 26 January 1997, he married Catherine Martin, a production designer; the couple have two children.

Luhrmann supports the Melbourne Demons in the Australian Football League.[19]

After theatrical successes, including the original stage version of Strictly Ballroom, Luhrmann moved into film and has directed five so far:

The modern film interpretation Romeo + Juliet, starring Leonardo DiCaprio and Claire Danes, defeated Titanic at the BAFTAs for best direction, music and screenplay. The film was celebrated at the Berlin Film Festival, where it was recognised with the Gold Bear award for direction and Silver Bear for DiCaprio's performance. Luhrmann also produced the soundtrack albums for the film.

Luhrmann's Moulin Rouge! (2001) was named one of the AFI's top ten films of 2001[20] and in 2010 was chosen as the top film of the 2000s decade in a poll of 150,000 respondents in the United Kingdom.[21] The film also gave birth to a successful soundtrack album, selling more than seven million copies, led by the Grammy-winning number one hit single "Lady Marmalade".[22]

Luhrmann's 2008 romantic epic Australia starred Nicole Kidman and Hugh Jackman. While achieving modest box office success in the United States, the film was very successful in Europe, maintaining the #1 slot at the box office for many weeks in France, Germany, Spain, Italy and the Scandinavian countries.[23] It is the second-highest grossing Australian film of all time, next to Crocodile Dundee and ahead of Happy Feet.[24]

Luhrmann at the 2013 Cannes Film Festival

In 2016, Luhrmann collaborated with award-winning playwright Stephen Adly Guirgis on the Netflix series The Get Down about the birth of hip-hop in the 1970s.[26]

Luhrmann has cast certain actors in more than one of his films:

Luhrmann has cited Italian grand opera as a major influence on his work and has also given a nod to other theatrical styles, such as Bollywood films, as having influenced his style. Luhrmann was a ballroom dancer as a child and his mother taught ballroom dancing which was an inspiration for Strictly Ballroom. Luhrmann's favourite films are Star 80, 8½, War and Peace, Medium Cool and Fitzcarraldo.[32]

The Academy Awards, or "Oscars", are a set of awards given annually for excellence of cinematic achievements. The awards, organized by the Academy of Motion Picture Arts and Sciences (AMPAS), were first held in 1929 at the Hollywood Roosevelt Hotel. Luhrmann has been nominated once for Moulin Rouge!, but not for directing, prompting host Whoopi Goldberg to remark, "I guess just directed itself."[38]

The British Academy Film Award is an annual award show presented by the British Academy of Film and Television Arts. The awards were founded in 1947 as The British Film Academy, by David Lean, Alexander Korda, Carol Reed, Charles Laughton, Roger Manvell and others. Luhrmann has received two awards from seven nominations.

The Golden Globe Award is an accolade bestowed by the 93 members of the Hollywood Foreign Press Association (HFPA) recognizing excellence in film and television, both domestic and foreign. Luhrmann has been nominated three times, winning in 2002 for Best Motion Picture, Comedy or Musical

An award presented by The Recording Academy to recognize achievement in the mainly English-language music industry, held since 1959. Luhrmann has been specifically been nominated twice, with additional accolades for songs on the albums he has produced for his films, including wins for Lady Marmalade at 2002's Grammy's (Grammy Award for Best Pop Collaboration with Vocals), as well as nominations for Young and Beautiful (Lana Del Rey song) for the Grammy Award for Best Song Written for Visual Media the 2014 Grammy's.

The Antoinette Perry Award for Excellence in Broadway Theatre, more commonly known as the Tony Award, recognizes excellence in live Broadway theatre, and has been awarded since 1947. Luhrmann has specifically been nominated twice, and his production of La Boheme also won awards for Best Scenic Design and Best Lighting Design at the 57th Tony Awards.

In September 2009, Luhrmann made an appearance as a guest judge on Dancing with the Stars.[42] Luhrmann participated on the NPR radio quiz program Wait Wait... Don't Tell Me! in 2013.[43]