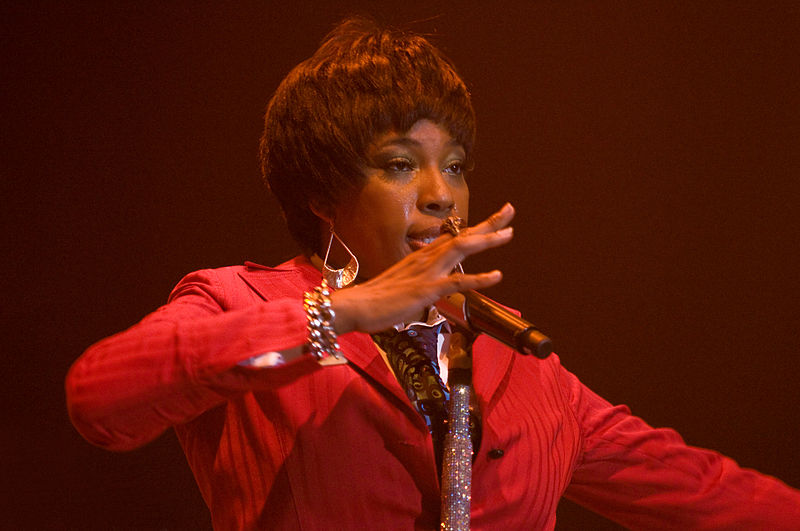 Macy Gray (born Natalie Renée McIntyre; September 6, 1967[2]) is an American R&B and soul singer-songwriter, musician, record producer and actress. She is known for her distinctive raspy voice, and a singing style heavily influenced by Billie Holiday.

Gray has released six studio albums, and received five Grammy Award nominations, winning one. She has appeared in a number of films, including Training Day, Spider-Man, Scary Movie 3, Lackawanna Blues, Idlewild, For Colored Girls, and The Paperboy. Gray is best known for her international hit single "I Try", taken from her multi-platinum debut album On How Life Is.

In 2016, Gray made a large artistic leap by changing labels to record an album produced with binaural sound. Stripped (Chesky Records, 2016)[1] marked the singer's first steps into the world of audiophile recordings.

Natalie McIntyre was born in Canton, Ohio,[3] the daughter of Laura McIntyre, a math schoolteacher,[4] and Otis Jones who left when she was a baby.[5] Her stepfather was a steelworker, and she has a sister who would become a biology teacher.[5] She began piano lessons at age seven.[6] A childhood bicycle mishap resulted in her noticing a mailbox of a man named Macy Gray; she used the name in stories she wrote and later decided to use it as her stage name.[5]

Gray attended school with Brian Warner (later known as musician Marilyn Manson) although they did not know each other.[6] She attended more than one high school, including a boarding school which asked her to leave due to her behavior.[6] She graduated from Canton South High School in 1985.

She attended college at the University of Southern California and studied scriptwriting.[5]

While attending the University of Southern California, she agreed to write songs for a friend. A demo session was scheduled for the songs to be recorded by another singer, but the vocalist failed to appear, so Gray recorded them herself.

I started forming bands and writing songs just for fun and then I really got into it and got attached to it. Then a friend of mine asked me to be a singer in his jazz band. He gave me all these jazz CDs and I studied all these different singers and I kind of taught myself how to sing for a gig, but I didn't take it seriously until later.[6]

She then met writer-producer Joe Solo while working as a cashier in Beverly Hills.[7] Together, they wrote a collection of songs and recorded them in Solo's studio. The demo tape gave Gray the opportunity to sing at jazz cafés in Los Angeles.[8] Although Gray did not consider her unusual voice desirable for singing,[6] Atlantic Records signed her. She began recording her debut record but was dropped from the label upon the departure of A&R man Tom Carolan, who had signed her to the label.[9] Macy returned to Ohio but in 1997 Los Angeles based Zomba Publishing Senior VP A&R man Jeff Blue, convinced her to return to music and signed her to a development deal, recording new songs based on her life experiences, with a new sound, and began shopping her to record labels.[10][11] In 1998, she landed a record deal with Epic Records.[12] She performed on "Love Won't Wait", a song on the Black Eyed Peas' debut album Behind the Front.[13]

Gray worked on her debut album in 1999 with producer Darryl Swann.[14] Released in the summer of 1999, On How Life Is became a worldwide smash.[15] Despite the first single "Do Something" stalling on the charts, the release of the second single "I Try" made the album a success for Gray.[16] "I Try" (which was originally featured in Love Jones and the Jennifer Aniston-starring romantic-comedy Picture Perfect in 1997)[17] was one of the biggest singles of 1999,[18][19] and subsequent singles "Still" and "Why Didn't You Call Me" ensured the album became triple platinum in the US[20] and quadruple platinum in the UK.[21]

In 2001, Gray won the Grammy Award for Best Female Pop Vocal Performance for "I Try", which was also nominated for "song of the year" and "record of the year".[22] She then collaborated with Fatboy Slim, the Black Eyed Peas, and Slick Rick (on the song "The World Is Yours", from the Rush Hour 2 soundtrack), as well as acting for the first time, in the thriller Training Day.[23] In August 2001, Gray was booed off the field at the Pro Football Hall of Fame exhibition game after forgetting the lyrics to the American national anthem.[24]

Gray visiting the Astrodome as a volunteer, in Houston, Texas, September 3, 2005

Gray's The Id featured appearances by John Frusciante and Erykah Badu on the single "Sweet Baby" (which was co-written with longtime collaborator Joe Solo).[25] The album peaked at number eleven on the Billboard 200.[26] It fared even better in the UK, where it reached number one on the UK Albums Chart and was certified gold by the BPI.[27] The underperformance in the United States, compared to her debut album, may have been due to The Id being released just a week after the September 11, 2001 attacks.[28]

In 2002, she appeared in Spider-Man and contributed a remix of her song "My Nutmeg Phantasy" to its accompanying soundtrack. Gray also worked with Santana on the track "Amoré (Sexo)", for his album Shaman.[29][30]

She recorded a duet with Zucchero called "Like the Sun (From Out of Nowhere)", which featured Jeff Beck on guitar released in 2004 on Zu & Co., a duets collection.[31][32] Her song "Time of My Life" was included in the soundtrack to 8 Mile.[33] A cartoon based on Gray's childhood was being developed, but it never came to fruition.[14][30]

In 2003, Gray released her third studio album, The Trouble with Being Myself, to rave reviews.[citation needed] The lead single, "When I See You", became a radio hit in the US and a top forty hit in the UK, although the album was not as well received by fans.[34] Nevertheless, it became Gray's third top twenty album in the UK.[35][36] A greatest hits collection and a live album were subsequently released: The Very Best of Macy Gray (2004) and Live in Las Vegas (2005). Additionally, Gray was featured on Marcus Miller's 2005 album Silver Rain, on a cover of Prince's 1986 song "Girls & Boys". She also appeared on the soundtrack to the film Chicago with Queen Latifah and Lil' Kim on "Cell Block Tango/He Had it Comin'."[37]

Gray began 2007 by being kicked off-stage at a concert in Barbados for profanity (which was part of the show), but she was not aware that it was against the law in that country.[38] She gave a public apology that night to avoid arrest.[39]

In March, Gray released her fourth studio album (sixth overall), Big.[40] Two singles, "Finally Made Me Happy" and "Shoo Be Doo", were released from the album.[39] "What I Gotta Do", another track from the album, is featured on the Shrek the Third soundtrack. It has been considered Gray's comeback album, after a four-year hiatus since her last studio album.[41] The album was critically acclaimed and seen by some as her best work to date.[42] It features collaborations with Natalie Cole, Fergie, Justin Timberlake, and will.i.am, who co-executive produced the album with Gray. It was moderately successful in the US, where it debuted and peaked at number 39 on the Billboard 200, becoming Gray's highest-charting album since The Id.[43] Big reached number 62 on the albums chart in the UK,[44] her lowest-charting UK album, but it achieved some success in several other countries, including Switzerland, the Czech Republic, and Finland, reaching the Top 40 on their album charts.[45]

Early in 2009, Gray recorded the song "Don't Forget Me" for the soundtrack of Confessions of a Shopaholic.[49]

Upon its release, The Sellout received generally mixed reviews from most music critics. Metacritic gave it an average score of 57, based on 15 reviews;[50] Andy Gill of The Independent gave it three out of five stars; while AllMusic writer John Bush shared a similar sentiment and panned Gray's songwriting.[51]

However, The Boston Globe's James Reed commended its production,[52] and Jeremy Allen of NME gave the album a 7/10 rating.[53]

In 2011, Gray signed a deal with 429 Records and started recording a series of covers for her next studio album Covered. The album was officially released on March 26, 2012. The album's first single was "Here Comes the Rain Again" (originally performed by Eurythmics).[54] On February 16, 2012, Gray participated in the Sanremo Festival as a guest, performing alongside Gigi D'Alessio and Loredana Bertè.[55]

For the 40th anniversary of the 1972 Stevie Wonder album Talking Book, Gray covered the entire record and released her Talking Book as a tribute.[56]

In an interview with Oprah Winfrey's Where Are They Now, Gray opened up about her problems with drug abuse, stating that she was ill-prepared for the level of fame she received. The interview coincided with the release of her album The Way, released in October 2014 on Kobalt Records. A world tour was announced shortly after its release.[57]

In 2016, Gray's career continued with an album produced by Chesky Records, the record label founded by Grammy-nominated composer and musician David Chesky. Stripped was released September 9, 2016 and garnered unanimous praise from critics. The album debuted at #3 on the Billboard Jazz Chart.[1] Earlier that year, she was featured on Ariana Grande's song "Leave Me Lonely" from her third studio album Dangerous Woman.

Gray appeared in the eighth season of Bravo's Celebrity Poker Showdown, playing for Habitat for Humanity. She finished in third place.[58]

Gray sang the theme song for the Nickelodeon animated series As Told by Ginger, composed by Jared Faber and Emily Kapnek.[61]

In August 2008, Gray headlined at the 2008 Summer Sundae music festival in Leicester, England, performing cover versions of Rod Stewart's "Do Ya Think I'm Sexy?", Deee-Lite's "Groove Is in the Heart" and Radiohead's "Creep".[62] For the gig, her band wore pink Andy Warhol wigs.[63]

On September 28, 2008, Gray sang the American national anthem as part of the Israeli flag-raising ceremony at the Israeli consulate of Los Angeles.[64][65]

In 2008, Gray collaborated with Australian DJ and singer Kaz James on the song "Can't Hold Back". The single was released in early 2009 in Australia and is credited to Kaz James featuring Macy Gray.[66]

In 2009, Gray briefly competed in season 9 of Dancing with the Stars with professional partner Jonathan Roberts. They were eliminated in a double elimination in week one.

In 2012, she performed the Michael Jackson song "Rock with You" for a special performance of the West End musical Thriller - Live for BBC Children in Need Pop Goes the Musical.

In 2016, Gray was featured on the song “Leave Me Lonely” by Ariana Grande

Gray was married to Tracy Hinds, a mortgage broker, for about four years, but they divorced when her career was about to begin.[5] They have three children:[21] Aanisah, Mel, and Happy.[5]

Report a problem
Write to Macy Gray at FanPal • 2022