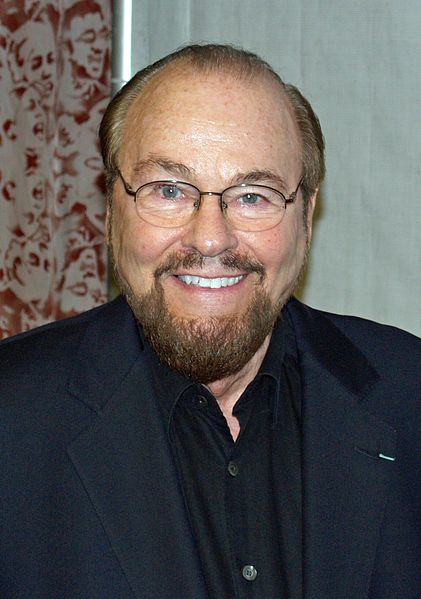 James Lipton (born September 19, 1926) is an American writer, lyricist, actor and dean emeritus of the Actors Studio Drama School at Pace University in New York City. He is the executive producer, writer and host of the Bravo cable television series Inside the Actors Studio, which debuted in 1994.[1]

Lipton was born on September 19, 1926, in Detroit, Michigan, the only child of Betty (née Weinberg), a teacher and librarian,[2] and Lawrence Lipton, a journalist and beat poet. Noted as the author of the popular Beat Generation chronicle The Holy Barbarians, Lawrence was a graphic designer, a columnist for the Jewish Daily Forward and a publicity director for a movie theater.[3][4] Lawrence was a Polish Jewish immigrant (from Łódź), while Betty's parents were Russian Jews.[5][6][7] His parents divorced when Lipton was six,[2] and his father abandoned the family.[8]

Lipton's family struggled financially, and he started to work at age 13.[8] He worked in high school as a newspaper copy boy for The Detroit Times, and an actor in the Catholic Theater of Detroit and in radio.[2][8] After graduating from Central High School in Detroit, he attended Wayne State University for one year in the mid-1940s and enlisted in the United States Air Force.[2]

Lipton portrayed Dan Reid, the Lone Ranger's nephew, on WXYZ Radio's The Lone Ranger. He initially studied to be a lawyer in New York, and turned to acting to finance his education.[2][9][10] He wrote for several soap operas, Another World, The Edge of Night, Guiding Light, The Best of Everything, Return to Peyton Place and Capitol, as well as acting for over ten years on The Guiding Light.[9] Lipton studied two and half years with Stella Adler, four years with Harold Clurman, and two years with Robert Lewis.[2] He also started studying voice and dance (including modern dance and classical ballet), and choreographed a ballet for the American Ballet Theatre.[2]

In 1951, he appeared in the Broadway play The Autumn Garden by Lillian Hellman. He portrayed a shipping clerk turned gang member in Joseph Strick's 1953 film, The Big Break, a crime drama. He was the librettist and lyricist for the short-lived 1967 Broadway musical Sherry!, based on the Moss Hart and George S. Kaufman play The Man Who Came to Dinner, with music by his childhood friend Laurence Rosenthal. The score and orchestrations were lost for over 30 years, and the original cast was never recorded. In 2003, a studio cast recording (with Nathan Lane, Bernadette Peters, Carol Burnett, Tommy Tune, Mike Myers and others) renewed interest in the show.[11][12]

His book, An Exaltation of Larks, was first published in 1968, and has been in-print and revised several times since then, including a 1993 Penguin books edition.[13] The book is a collection of "terms of venery", both real and created by Lipton himself. The dust jacket biography for the first edition of Exaltation said his activities included fencing, swimming, and equestrian pursuits and that he had written two Broadway productions.

In 1983, Lipton published his novel, Mirrors, about dancers' lives. He later wrote and produced it as a made-for-television movie.[9] In television, Lipton has produced some two dozen specials including: twelve Bob Hope Birthday Specials; The Road to China, an NBC entertainment special produced in China; and the first televised presidential inaugural gala (for Jimmy Carter).[9]

In 2004, 2005, and 2013 Lipton appeared in several episodes of Arrested Development as Warden Stefan Gentles. In 2008, he provided the voice for the Director in the Disney animation film Bolt. He played "himself" as Brain Wash, interviewer of the monster Eva's acting teacher in the Paris-Vietnam animated Igor. Lipton has also appeared twice in the same episode of Family Guy in cutaways where he simply says "Improv!" both times.[citation needed]

Inside the Actors Studio

Main article: Inside the Actors Studio

Lipton created a project within the Actors Studio Drama School: a non-credit class called Inside the Actors Studio (1994), where successful and accomplished actors, directors and writers would be interviewed and would answer questions from acting students.[9] These sessions are also taped and broadcast on television for the general public to see. The episodes are viewed in 89 million homes throughout 125 countries.[14] Lipton hosts the show and conducts the main interview.[9] During an interview with Daniel Simone, author of The Lufthansa Heist, when asked if he had anticipated the sudden success, Lipton responded, "Not in my wildest imaginations. It was a joint, arduous effort involving many people. At a point and time not too distant in the past, I had three lives. I was the dean of the Actors Studio, the writer of the series, its host and executive producer. I maintained a preposterous sixteen-hour schedule."[15] He was awarded France's Ordre des Arts et des Lettres in 2014 for his work in the show.[14]

Between 1954 and 1959, Lipton was married to actress Nina Foch. He has been married to Kedakai Turner, a model and real estate broker, since 1970. Turner is well known as the model playing Ms. Scarlett on the cover of the popular boardgame Clue.[4]

In the 200th episode of Inside the Actors Studio, Lipton revealed that he is an atheist. He also revealed that during the 1950s, he had been a procurer of prostitutes in Paris.[8]

Lipton has stated in interviews that he is a pilot, certified in Airplane Single Engine Land planes.[16][17] He has been flying since 1980 and learned in a Cessna 152 and 172, at Van Nuys Airport. As of 2013, he had logged more than 1,000 hours of flight time. Lipton is a member of the Aircraft Owners and Pilots Association.[18]