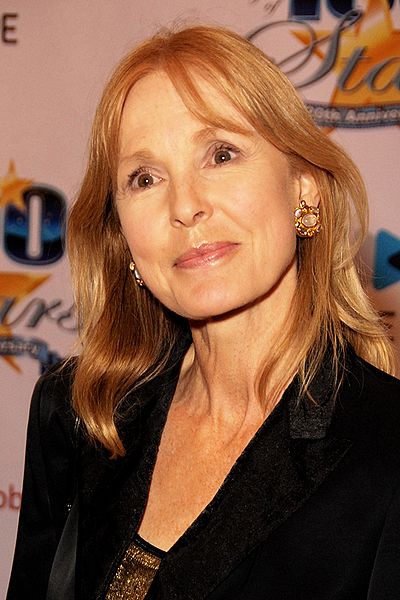 Victoria Tennant (born September 30, 1950) is an English film and television actress. She is known for her roles in the TV miniseries The Winds of War and War and Remembrance, in which she appeared as actor Robert Mitchum's on-screen love interest, Pamela Tudsbury.

Tennant was born in London. Her mother, Irina Baronova, was a Russian prima ballerina who appeared with the Ballet Russe de Monte Carlo; her father, Cecil Tennant, was a producer and talent agent for MCA.

Her maternal grandfather, Mikhail Baronov, was a senior officer in the Russian Navy; his wife, the former Lydia Vishniakova, was a general's daughter. Tennant has a sister, Irina, and a brother, Robert, both of whom were seriously injured in a car accident in 1967, in which their father was killed. Tennant's godfather was the actor Laurence Olivier.

Like her mother, Tennant trained in ballet, first at the Elmhurst Ballet School and then (for two years) at the Central School of Speech and Drama.

After a number of roles in British and other European films, including The Ragman's Daughter and Inseminoid, she emigrated to the United States. She then appeared in the TV mini-series The Winds of War and War and Remembrance, and films such as The Handmaid's Tale and Best Seller. She starred in two films with Steve Martin, her future husband: All of Me[1] and L.A. Story.[2]

In 2014, she published a memoir about her mother titled Irina Baronova and The Ballets Russes de Monte Carlo, published by the University of Chicago Press.[3][4] The book was presented at the Bel Air Country Club in Bel Air, Los Angeles.[5]

Tennant's first marriage was to Peppo Vanini, a nightclub owner who owned the famous Xenon nightclub, in 1969 (divorced, 1976).[6] She dated Matthew Chapman, a writer and director from in 1978 until 1982, but ended their relationship upon meeting actor-comedian Steve Martin.[6] She married Martin in 1986, and they divorced in 1994.[7] Since 1996, Tennant has been married to Kirk Justin Stambler, a lawyer for Warner Bros., with whom she has a daughter, Katya Irina, and a son, Nikolai.[7]

Report a problem
Write to Victoria Tennant at FanPal • 2022