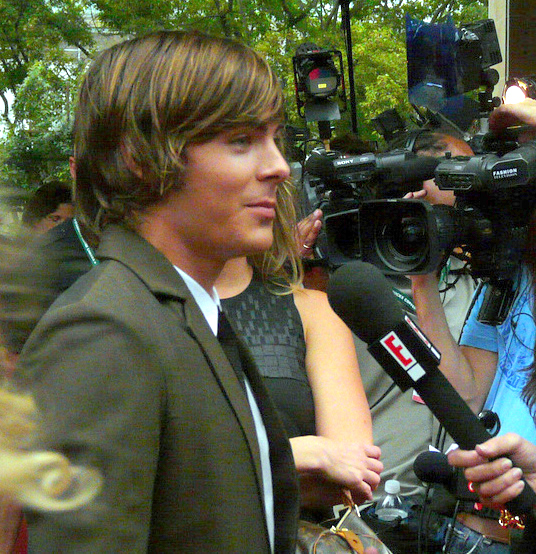 Efron was born in San Luis Obispo, California,[3] and later moved to Arroyo Grande, California. His father, David Efron, is an electrical engineer at a power station, and his mother, Starla Baskett, is a secretary who worked at the same power plant.[4][5] Efron has a brother, Dylan,[2] and had, as he has described, a "normal childhood" in a middle-class family.[6] His surname, "Efron" (אפרון), is an Ashkenazi Jewish surname, taken from a Biblical place name.[7][8] Zac has described himself as Jewish;[9] though he was raised in an agnostic household and did not practice religion as a child.[10]

Efron has said that he would "flip out" if he got a "B" and not an "A" in school, as well as that he was a class clown.[11] His father encouraged him to begin acting when Zac was eleven years old.[4] Efron subsequently appeared in theater productions at his high school,[12] worked in the theater The Great American Melodrama and Vaudeville,[6] and began taking singing lessons.[4] He performed in shows such as Gypsy; Peter Pan, or The Boy Who Wouldn't Grow Up; Little Shop of Horrors; and The Music Man. He was recommended to an agent in Los Angeles by his drama teacher, Robyn Metchik (the mother of actors Aaron Michael Metchik and Asher Metchik).[13][14] Efron was later signed to the Creative Artists Agency.[15]

Efron graduated from Arroyo Grande High School in 2006[16] and was then accepted into the University of Southern California but did not enroll. He also attended Pacific Conservatory of the Performing Arts, a community college located in Santa Maria, California, where he performed during the years of 2000 and 2001.[17]

Efron began acting in the early 2000s with guest roles on several television series including Firefly, ER, and The Guardian. In 2004, he began appearing as a recurring character in the first season of the WB series Summerland. For the show's second season, which aired in 2005, he was promoted to the main cast. He also appeared in some films, including the Lifetime television film Miracle Run (2004), for which he earned a Young Artist Award nomination for his performance as one of two autistic twins.

Efron's career reached a turning point with the teen musical television film High School Musical (2006), which premiered on the Disney Channel in January 2006. The film, which has been described as a modern adaptation of Romeo and Juliet, saw Efron playing the male lead Troy Bolton, a high school basketball player who feels conflicted when he finds himself interested in participating in the school musical with Gabriella Montez (Vanessa Hudgens), a girl from the scholastic decathlon team. The film, which also starred Ashley Tisdale, Lucas Grabeel, Corbin Bleu, and Monique Coleman in pivotal roles, became a major success and helped Efron gain recognition among teenage audiences. The film's soundtrack was certified quadruple platinum by the RIAA,[18] making it one of the best-selling albums of the year in the United States. Efron's singing talents were disputed when it was revealed that his voice had been blended with Drew Seeley's on the soundtrack, but Efron clarified that the songs (written for a tenor) were written before he was cast and therefore did not suit his more baritone vocal range. In his subsequent musical films, Efron did his own singing.

Efron was next seen playing the role of Link Larkin in the musical comedy film Hairspray (2007), based on the 2002 Broadway musical of the same name. The film became a major commercial and critical success upon its release in July 2007. Later that year, he was seen reprising his role of Troy Bolton in High School Musical 2 (2007), which aired on the Disney Channel in August 2007.

Efron reprised his role of Troy Bolton in High School Musical 3: Senior Year (2008), the first film in the High School Musical franchise to receive a theatrical release. The film became a major blockbuster at the box office, and received mixed to positive reviews from critics. He followed this with the commercially successful comedy 17 Again (2009) about a 37-year-old man (Matthew Perry) who is transformed into his 17-year-old self (Efron) after a chance accident.

Efron's next release was Richard Linklater's period drama Me and Orson Welles, which premiered at the Toronto International Film Festival in September 2008 and received a wide release in late 2009. The film earned mostly positive reviews from critics. He next played the title role in the supernatural romantic drama Charlie St. Cloud (2010), which became a moderate success at the box office despite receiving mostly negative reviews from critics.

Efron next appeared as a part of the large ensemble cast in Garry Marshall's New Year's Eve (2011), which depicted a series of holiday vignettes of different groups of characters. The film received almost unanimously negative reviews from critics, but became a major success at the box office. He also played a supporting role in the critically successful Liberal Arts (2012), which premiered at the Sundance Film Festival in January 2012 and received a limited release later that year. He also starred alongside Nicole Kidman, Matthew McConaughey, David Oyelowo, and John Cusack in The Paperboy (2012), which premiered at the Cannes Film Festival in May 2012 and received a wider release later that year. The film received mixed to negative reviews from critics.

After lending his voice to the commercially successful computer-animated film The Lorax (2012), he appeared as the male lead in the romantic drama The Lucky One (2012), based on the novel of the same name by Nicholas Sparks. The film became a major box office success despite negative reviews from critics. He also starred in the drama At Any Price, which premiered at the 2012 Venice International Film Festival, and the historical drama Parkland, which premiered at the 2013 Venice International Film Festival. Both of the films received mixed reviews from critics.

Efron's first release of 2014 was the romantic comedy That Awkward Moment, on which he was also an executive producer. The film, which starred Efron alongside Miles Teller and Michael B. Jordan as three bachelors in New York City, became a moderate commercial success despite receiving mostly negative reviews from critics.

Later in 2014, Efron was seen in the adult comedy Neighbors (2014), co-starring Seth Rogen. The film revolved around a young couple, played by Rogen and Rose Byrne, who struggle to raise their baby daughter while living next to the house of a wild fraternity led by its president, played by Efron. The film became a major commercial success and earned mostly positive reviews from critics, who also added that Efron had successfully shed his "Disney kid" pretty boy image.[19]

Efron's only release in 2015 was the moderately successful We Are Your Friends (2015), in which he played a struggling DJ. In January 2016, he starred alongside Robert De Niro in the adult comedy Dirty Grandpa, about a straitlaced young man who begrudgingly indulges his grandfather's unhinged personality by taking him on a vacation to Florida. The film received mostly negative reviews from critics for its crude humor, but became a commercial success upon its release. He subsequently co-starred with Seth Rogen, Rose Byrne, and Chloë Grace Moretz in the comedy sequel Neighbors 2: Sorority Rising, which became a commercial and critical success upon its release in May 2016. The film followed the same couple (Rogen and Byrne) who team up with their former rival (Efron) to take down a hard-partying sorority led by a freshman (Moretz). His third 2016 comedy, released in July, was Mike and Dave Need Wedding Dates, in which he co-starred with Adam DeVine (playing siblings), as well as Anna Kendrick and Aubrey Plaza.

In 2017, Efron starred in Baywatch, an action comedy film version of the television series of the same name, released in May. The film features Dwayne Johnson and Efron with an ensemble cast, including Alexandra Daddario, Kelly Rohrbach, Jon Bass, Ilfenesh Hadera, and Priyanka Chopra. Also in 2017, Efron had a supporting role in two biographical films released in December, The Disaster Artist, a comedy-drama directed by and starring James Franco, and, as Phillip, in the musical The Greatest Showman, opposite Hugh Jackman. Both were nominated for the Golden Globe Award for Best Motion Picture - Musical or Comedy.[20][21]

In May 2017, it was announced that Efron will play serial killer Ted Bundy in Extremely Wicked, Shockingly Evil and Vile, opposite Lily Collins as Bundy's girlfriend.[22] In the same year, he was cast in a co-starring role in the Harmony Korine film The Beach Bum.[23]

People magazine said in 2007 that Efron and Vanessa Hudgens began dating in 2005 during the filming of High School Musical,[26][27][28] although Us magazine said, after the two broke up in December 2010, that they "met in 2005 while making the first High School Musical flick, and became a romantic item about two years later."[29] Efron began a romantic relationship with model and entrepreneur Sami Miró in September 2014. The couple split in April 2016.[30][31]

Efron sought treatment in early 2013 after struggling with alcoholism and substance abuse. He has been sober since June 2013.[1] In November 2013, Efron had to have his jaw wired shut after breaking it in a fall at home.[32] In March 2014, Efron engaged in a fight with a homeless man in Skid Row. Law enforcement officials did not make any arrests because they viewed it as mutual combat.[33]