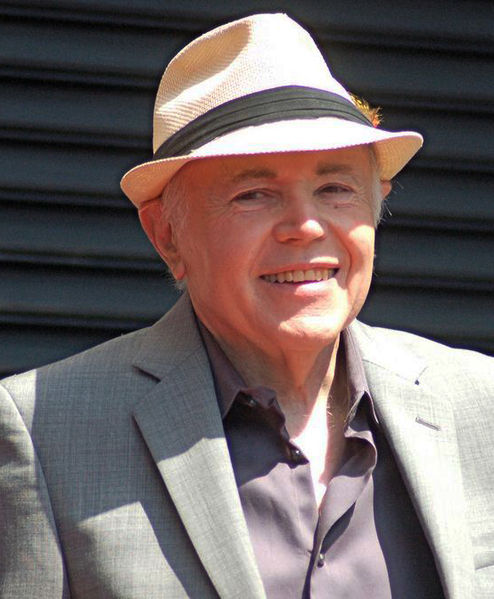 Walter Marvin Koenig (/ˈkeɪnɪɡ/; born September 14, 1936) is an American actor, writer, teacher and director, known for his roles as Pavel Chekov in Star Trek and Alfred Bester in the Babylon 5 series. He wrote the script for the 2008 science fiction legal thriller InAlienable.

Koenig was born in Chicago, Illinois, the son of businessman Isadore Koenig and his wife Sarah (née Strauss).[1][2] They moved to Manhattan when Walter was a child, where he went to school. Koenig's parents were Russian Jewish immigrants from the Soviet Union; his family lived in Lithuania when they emigrated, and shortened their surname from "Königsberg" to "Koenig".[3]

Koenig's father was a communist who was investigated by the FBI during the McCarthy era.[4] Koenig attended Grinnell College in Grinnell, Iowa, with a pre-med major. He transferred to UCLA and received a Bachelor of Arts in psychology. After a professor encouraged Koenig to become an actor, he attended Neighborhood Playhouse School of the Theatre in New York City with fellow students Dabney Coleman, Christopher Lloyd, and James Caan.[3]

Koenig began playing Ensign Pavel Chekov, navigator on the USS Enterprise, in the original Star Trek television series in the second season and in all of the films featuring the original cast, also including Star Trek Generations.[citation needed]

One of only two actors to audition, he was cast as Chekov almost immediately primarily because of his resemblance to British actor and singer Davy Jones of the Monkees. Show creator Gene Roddenberry hoped that Koenig would increase the show's appeal to young people.[5]

As the 30-year-old's hair was already receding, costume designers fashioned a Davy Jones-style "moptop" hairpiece for him. In later episodes, his own hair grew out enough to accomplish the look with a comb-over.[6] (The studio's publicity department, however, falsely ascribed the inclusion of Chekov to an article in Pravda that complained about the lack of Russians in Star Trek.[5])

Roddenberry asked him to "ham up" his Russian accent to add a note of comic relief to the series. Chekov's accent has been criticized as inauthentic, in particular Koenig's substituting the "w" sound in place of a "v" sound (e.g., "wodka" for "vodka"); Koenig has said the accent was inspired by his father, who had the same difficulty with the "v" sound.[4]

Most of Koenig's fan mail indeed came from children, and the high volume of letters contributed to him soon receiving a contract as a regular cast member; this surprised Koenig, who had been told that Chekov would be a recurring role.[5][7] When the early Season 2 episodes of Star Trek were shot, George Takei was delayed while completing the movie The Green Berets, so Chekov is joined at the Enterprise helm by a different character. When Takei returned, the two had to share a dressing room and a single episode script. This reportedly angered Takei to the point where he nearly left the show, but the two actors have since become good friends, to the point that Koenig was the best man at Takei's wedding in 2008.[8]

The Chekov character never appeared in the animated Star Trek for budgetary reasons; however, Koenig is credited with writing an episode of the series titled "The Infinite Vulcan", making him the first cast member to write a Star Trek story for television.[citation needed]

He received Saturn Award nominations for Best Supporting Actor in a Film for both Star Trek II: The Wrath of Khan and Star Trek IV: The Voyage Home. Koenig reprised the role of Chekov for the fan webseries Star Trek: New Voyages, "To Serve All My Days", and the independent Sky Conway/Tim Russ film, Star Trek: Of Gods and Men, both in 2006, and Star Trek: Renegades, in 2015. According to the teaser for Renegades episodes 2 and 3, this will be the last time Koenig plays the role of Chekov.[citation needed]

After Chekov, Koenig had a recurring role as Psi Cop Alfred Bester on the television series Babylon 5. He was a "Special Guest Star" in twelve episodes and, at the end of the third season, the production company applied for an Emmy nomination on his behalf. He was slated to play Bester on the spin-off series Crusade, but the series was cancelled before his episode was filmed. The character name of "Alfred Bester" was an homage to the science-fiction writer of the same name.[citation needed]

Koenig played "Oro" in two episodes of the Canadian science fiction television series The Starlost, which aired in 1973 on Canada's CTV television network. He filmed a few FMV sequences for a re-released copy of the game Star Trek Starfleet Academy for PCs.[citation needed]

Koenig's film, stage, and TV roles span fifty years. He has played roles ranging from a teenage gang leader (Alfred Hitchcock Presents) to Scandinavian fiancé Gunnar in the Gidget episode entitled "Gidget's Foreign Policy": COMBAT! s.1 ep.12: "The Prisoner" (1962) Minor role as soldier on guard duty, to a Las Vegas entertainer (I Spy). He returned to space with a starring role in Moontrap and played a futuristic dictator in the video game Maximum Surge.[9]

The game was later cancelled, but considerable footage from it was recycled for the film Game Over, with Koenig's dialogue dubbed over in order to retrofit his performance into the role of a computer hard drive.[citation needed]

During the early 1990s he starred in a touring production of the play "The Boys in Autumn", playing a middle aged Tom Sawyer, who reunites with childhood friend Huckleberry Finn. Fellow Trek actor Mark Lenard played Finn.[citation needed]

Koenig at ComicCon in Dallas, 2007

In addition to acting, he has written several films (Actor, I Wish I May, You're Never Alone When You're a Schizophrenic), one-act plays, and a handful of episodes for TV shows: Star Trek: The Animated Series, Land of the Lost, Family and The Powers of Matthew Star.

He has written several books, including Warped Factors: A Neurotic's Guide to the Universe (an autobiography), Chekov's Enterprise (a journal kept during the filming of Star Trek: The Motion Picture) and Buck Alice and the Actor-Robot (a science fiction novel), which was re-released in 2006. He created his own comic book series called Raver, which was published by Malibu Comics in the early 1990s, and appeared as a "special guest star" in an issue of the comic book Eternity Smith, which features him prominently on its cover.[10]

In 2013, he released the graphic novel Walter Koenig's Things To Come with artist J.C. Baez, published by Bluewater Comics, which compiled the four issues of the miniseries of the same name.[11]

Koenig has taught classes in acting and directing at UCLA, the Sherwood Oaks Experimental Film College, the Actor's Alley Repertory Company in Los Angeles, and the California School of Professional Psychology at Alliant International University. In 2002, he directed stage versions of two of the original Twilight Zone episodes for Letter Entertainment.[12]

In 1987, Koenig directed his original one-act play The Secret Life of Lily Langtree at the Theatre of NOTE in Los Angeles. In 1989, Koenig starred in the science fiction film Moontrap as Mission commander Colonel Jason Grant.[citation needed]

In 1997, Koenig starred in Drawing Down the Moon, an independent film about a Wiccan woman who attempts to open a homeless shelter in a small Pennsylvania town. Koenig played Joe Merchant, a local crime lord obsessed with chaos theory who sends his thugs to intimidate her into shutting down the shelter.[citation needed]

In 2004, Koenig co-starred in Mad Cowgirl, an independent movie about a meat-packing health inspector dying from a brain disorder, in which he played televangelist Pastor Dylan. The movie played the SF Indiefest and the Silverlake Film Festival, followed by a limited release in major cities. Mad Cowgirl was released on DVD on December 5, 2006.[citation needed]

In 2007, he reunited with fellow Babylon 5 star Bruce Boxleitner for the movie Bone Eater.[citation needed]

In 2013, Koenig ventured into the steampunk genre, starring in the short film Cowboys & Engines alongside Malcolm McDowell and Richard Hatch.[14] He played an evil newspaper tycoon in Blue Dream from director Gregory Hatanaka. Most recently, Koenig appeared in the 1980s throwback Neil Stryker and the Tyrant of Time from director Rob Taylor, battling puppet goblins as science officer Ray Nabroski.[citation needed]

In 2018, he again appeared opposite Hatch in the science-fiction drama Diminuendo, which was Hatch's last performance before his death.[15]

In 2007, Koenig was asked by the human rights group U.S. Campaign for Burma to help in their grassroots campaign about the humanitarian crisis in Burma. As detailed on his official website, he visited refugee camps along the Burma-Thailand border from July 16 to 25, 2007.

In September 2008, Koenig served as best man at the wedding of his Star Trek co-star George Takei to Brad Altman.[19]