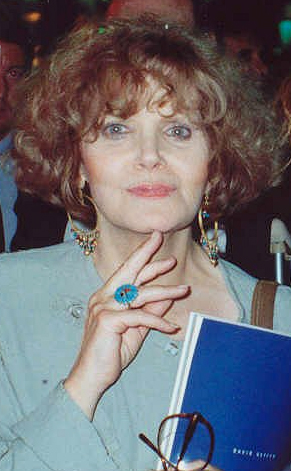 Verla Eileen Regina Brennan (née Brennen; September 3, 1932 - July 28, 2013)[1] was an American film, stage, and television actress. She made her film debut in the satire Divorce American Style (1967), followed by a supporting role in Peter Bogdanovich's The Last Picture Show (1971), which earned her a BAFTA award nomination for Best Supporting Actress.

She gained further critical acclaim for her role as Doreen Lewis in Private Benjamin, for which she received an Oscar nomination for Best Supporting Actress. She reprised the role for the TV adaptation, winning both a Golden Globe and Emmy for her performance. Brennan also starred in the mystery comedy Clue (1985), and had a minor role in the horror film Jeepers Creepers (2001).

Brennan also worked prolifically in television, receiving Emmy nominations for her guest-starring roles on Newhart, Thirtysomething, Taxi and Will & Grace.

Brennan in a 1963 publicity photo

Brennan began her acting career while attending university, appearing in Georgetown's stage productions of Arsenic and Old Lace. Her exceptional comic skills and romantic soprano voice propelled her from unknown to star in the title role of Rick Besoyan's off-Broadway tongue-in-cheek musical/operetta Little Mary Sunshine (1959),[7] earning Brennan an Obie Award, and its unofficial sequel The Student Gypsy (1963), on Broadway.[9]

She played Annie Sullivan in The Miracle Worker at the 1961 Central City, Colorado, Festival, directed by Arthur Penn, who had just won a Tony for his direction of the play on Broadway.[10] She went on to create the role of Irene Molloy in the original Broadway production of Hello, Dolly! (1964).[11]

Brennan's work in theatre attracted attention from television producers in California. Carl Reiner, who was seeking an actress to play the role of Laura Petrie on The Dick Van Dyke Show, flew her from New York to Los Angeles to audition for the part; however, the role was given to Mary Tyler Moore.[12]

Her feature film debut was in Divorce American Style (1967). She soon became one of the most recognizable (if not precisely identifiable) supporting actresses in film and television. Her roles were usually sympathetic characters, though she played a variety of other character types, including earthy, vulgar, and sassy, but occasionally "with a heart of gold". A year after her feature-film debut, she became a semiregular on the comedy-variety show Rowan & Martin's Laugh-In, but stayed for only two months.

Although her name was not often recognized by the general public, she became a favorite of many directors, in particular Peter Bogdanovich. She appeared in Bogdanovich's 1971 drama The Last Picture Show as Genevieve, for which she received a BAFTA nomination for best supporting actress.[13]

In 1972, Brennan appeared in an All In The Family episode, "The Elevator Story" (1972), as Angelique McCarthy, followed by a role as brothel madam Billie in George Roy Hill's Academy Award-winning 1973 film The Sting as the confidante of con man Henry Gondorf (Paul Newman). In 1974, she reunited with director Bogdanovich, appearing in his adaptation of the Henry James novella Daisy Miller. Bogdanovich was the only director who made use of her musical talents (before, she sang in performances off Broadway) when he cast her as Cybill Shepherd's crude, fun-loving maid in his 1975 musical flop At Long Last Love (which also starred Madeline Kahn; Brennan and Kahn worked together in two more films: The Cheap Detective and Clue).

Brennan also worked with director Robert Moore and writer Neil Simon, appearing in Murder by Death as Tess Skeffington (1976); and The Cheap Detective (1978). Both of these movies also starred James Coco, James Cromwell, and Peter Falk. She had a starring role, playing the disc jockey Mutha in the 1978 movie, FM, a comedy-drama about life at a rock-music radio station.

In 1980, Brennan received a Best Supporting Actress Oscar nomination for her role as Goldie Hawn's nasty commanding officer in Private Benjamin. She reprised the role in the television adaptation (1981-1983), for which she won an Emmy (supporting actress) as well as a Golden Globe (lead actress). She had one additional Golden Globe nomination and six Emmy nominations. Brennan received an Emmy nomination for her guest-starring role in Taxi episode "Thy Boss's Wife" (1981).

In the 1990s, she appeared in Stella with Bette Midler, Bogdanovich's Texasville (the sequel to The Last Picture Show), and Reckless. She had a recurring role on the sitcom Blossom as the neighbor/confidante of the title character. She also appeared opposite Vincent D'Onofrio in a segment of Boys Life 2, an anthology film about gay men in America.[14]

In 2001, she made a brief appearance in the horror movie Jeepers Creepers, and the following year starred in the dark comedy film Comic Book Villains, with DJ Qualls. In recent years, Brennan had guest-starred in television, including recurring roles as the nosy Mrs. Bink in 7th Heaven and as gruff acting coach Zandra on Will & Grace. In 2003, director Shawn Levy cast her in a cameo role of a babysitter to Steve Martin and Bonnie Hunt's children in an updated remake of Cheaper by the Dozen. Levy was inspired to cast Brennan after seeing Private Benjamin on television. Brennan's cameo was deleted from the actual cut of the movie, however. Nonetheless, she did receive credit for her role on the deleted scenes special feature of the film's DVD. In 2004, she appeared in The Hollow as Joan Van Etten.

Brennan guest-starred on two Murder, She Wrote episodes, "Old Habits Die Hard" (1987) and "Dear Deadly" (1994), and in 1987, she also appeared in the Magnum, P.I. episode "The Love That Lies". Brennan was nominated for an Emmy in 2004 for her performance as Zandra,[15] Jack McFarland's caustic drama teacher, on Will and Grace.

From 1968 to 1974, Brennan was married to British poet and photographer David John Lampson, with whom she had two sons: Patrick, a former basketball player turned actor, and Sam, a singer.[7]

Brennan was hit by a passing car in 1982 in Venice Beach while leaving a restaurant with Goldie Hawn, and suffered massive injuries.[7] She took three years off work to recover, and had to overcome a subsequent addiction to painkillers.[16] She also fell from the stage in 1989 during a production of Annie, breaking a leg.[17] The following year, she was diagnosed with breast cancer, which she successfully treated.[17]

Brennan died at her home in Burbank, California, on July 28, 2013, of bladder cancer.[18] She was 80. Her Private Benjamin costar Goldie Hawn said she was a "brilliant comedian, a powerful dramatic actress and had the voice of an angel."[19] Actor, writer, and director Michael McKean, Brennan's co-star in Clue, called Brennan "a brilliant actress, a tough and tender woman and a comic angel".[18]

Report a problem
Biography of Eileen Brennan at FanPal • 2022