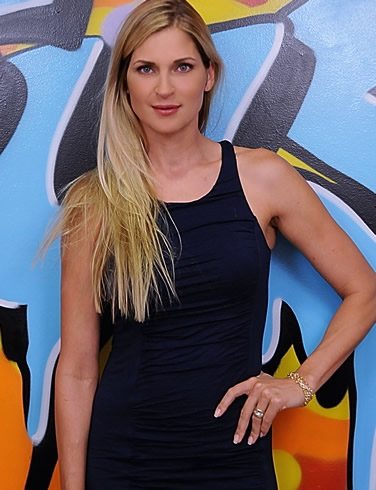 Reece was born in La Jolla, California, and raised in Saint Thomas, U.S. Virgin Islands. An only child[2] of Terry Glynn[3] and Robert Eduardo Reece.[4] Her father, who was Afro-Trinidadian, was killed in a plane crash when Gabrielle was five. She returned to the U.S. mainland for the eleventh grade, attending Keswick Christian School in St. Petersburg, Florida, when she took up sports. She accepted a volleyball scholarship from Florida State University, where she majored in communications, and in volleyball she led the league in kills four times and blocks once. Reece also set two school volleyball records, in solo blocks (240) and total blocks (747), both of which still stand. In 1989, she moved to New York City to pursue more rigorously a parallel career as a sports fashion model and also continue in her pro volleyball career. Florida State University inducted Reece into the Florida State University Athletics Hall of Fame in 1997.
Read more...

For four consecutive years, Reece was the WBVL kills leader from 1993-1996. She was named the Offensive Player of the Year in 1994-95, and the League blocks leader in 1993. She also competed domestically in the 1999-2000 Olympic Challenge Series, the 1999-2000 FIVB Beach Volleyball World Tour, and other competitions.

Reece trained in golf for four years hoping to make it onto the LPGA but was unsuccessful. In 2009, she said, "... with young children, I simply didn't have the time for such a demanding game".[5]

Reece began her modeling career while attending FSU. In 1989 she was named by Elle as one of the five most beautiful women in the world. She appeared in several Elle layouts in the late 1980s and early 1990s. She has appeared on the covers of Outside, Shape, Women's Sports & Fitness, Elle, and Life. She appeared on the cover of Playboy, with an accompanying nude pictorial, in January 2001. Reece had previously made a cameo appearance as herself on the HBO series Arliss in which she angrily reprimanded her agent for even suggesting she accept an offer to pose nude for Playboy.[6][7]

Reece co-wrote a book with Karen Karbo about her life as a pro athlete entitled Big Girl in the Middle, published by Crown (1997). She also wrote a column for Condé Nast's magazine Women's Sports & Fitness, and has been a contributing editor at Elle magazine. For several years, Reece hosted ESPN and NBC's Gravity Games, where she participated in road-luging, white water kayaking, drag racing, surfing, sky diving, and more on MTV Sports (1993-95), and The Extremists with Gabrielle Reece (1995-96). She was also a commentator at the 1998 Goodwill Games.[citation needed]

Reece recently reunited with Nike as a spokeswoman, and she is a new expert and writer for Yahoo-Health. Reece also produced an infomercial for a health and fitness product, "The Primal System" with fitness expert Paul Chek, and hosted Insider Training for Fit TV/Discovery, in which she interviewed professional athletes about their training & conditioning regimens. Reece hosted NBCs STRONG 2016 and along with her husband Laird Hamilton did the series XPT :The Experience for Outside Television 2017

As an actress, Reece played the role of a physical trainer in the film Gattaca (1997) and a pro beach volleyball player in Cloud Nine with Burt Reynolds (in 2004). She guest-starred on TV series North Shore (2004) and 8 Simple Rules (2005). She also appeared as a guest on Extreme Makeover Home Edition and America's Next Top Model and The Tyra Banks Show. In 2007, Reece and her husband Laird Hamilton, appeared in the ABC reality television series Fast Cars and Superstars: The Gillette Young Guns Celebrity Race, featuring a dozen celebrities in a stock car racing competition. In the first round of competition, she matched up against the former NFL coach Bill Cowher and the actor William Shatner.[citation needed] In 2008, she released Gabrielle Reece: Fit & Healthy Prenatal Workouts with exercise guru Mike Monroe. For 2008, Reece was the spokeswoman for Simply Nutrilite, a line developed by Quixtar.

In her April 2013 book titled My Foot Is Too Big for the Glass Slipper: A Guide to the Less Than Perfect Life, Reece writes that "to truly be feminine means being soft, receptive, and - look out, here it comes - submissive."[8][9] She went on to further define her point in an April 16 interview on The Today Show by saying that she believes women being submissive in relationships is a sign of strength - not weakness. "We don’t worry about (men) having it all, so I don’t know where we got this idea to have it all".[10]

On November 30, 1997, Reece married big-wave surfer Laird Hamilton. They have two daughters: Reece Viola Hamilton (born in October 2003) and Brody Jo Hamilton (born on January 1, 2008, in Hawaii).[11] She and Hamilton also are raising Izabela, Hamilton's daughter from his previous marriage to big wave surfer and clothing designer Maria Souza. The Hamilton-Reece family splits time residing in Hawaii and Malibu, California. In the latter, she is known as a member of the "Malibu Mob", a group of celebrity friends and neighbors that includes actor John Cusack, hockey player Chris Chelios, tennis player John McEnroe, and actor John C. McGinley.