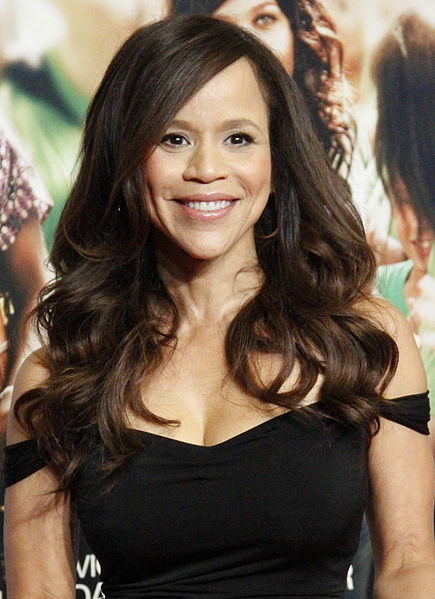 Rosa María Perez (born September 6, 1964)[3] is an American actress, community activist, talk show host, author, dancer and choreographer. Her film breakthrough was in Spike Lee's Do the Right Thing (1989), which she followed with White Men Can't Jump (1992). Among many honors, she was nominated for the Academy Award for Best Supporting Actress for her performance in Fearless (1993).[4] She was also nominated for three Emmy Awards for her work as a choreographer on In Living Color. In 2007, Perez starred on Broadway as Googie Gomez in a revival of The Ritz, and she was nominated for an Indie Spirit Award for her performance in The Take. Perez was a regular host on The View and in 2015 she returned to Broadway to star in Fish in the Dark, a play written by Larry David.[5][6]

Perez was born in the Bushwick neighborhood of Brooklyn, New York, to mother Lydia Perez and Ismael Serrano, a merchant marine seaman.[7][8] Her parents, who were both from Aguadilla, Puerto Rico,[9] were married to other people when they met.[5][10] She was born at the now-closed Greenpoint Hospital in the Greenpoint neighborhood of Brooklyn.[11] Perez became a ward of the state when her mother took her from an aunt, who had been raising her. She was transferred to a group foster home at age three and lived in foster care in New York and Peekskill until age eight, and was still legally considered a ward of the State of New York until age 12. Her mother and aunt frequently visited, and her father made an unsuccessful custody bid at one point.[5][12] Perez has five brothers and sisters from her mother's first marriage to Ventura Perez but also has additional half-brothers and half-sisters (a total of 10 children).[12] These life problems left Perez with a speech impediment.[3] She eventually moved in with paternal aunt, Ana Dominga Otero Serrano-Roque,[3] and attended Grover Cleveland High School, in the Ridgewood neighborhood of Queens.[13] Her mother died of AIDS-related complications in 1999.[12] Perez is of Puerto Rican descent [14] and had a strict Catholic upbringing, which she has credited to the influence of the nuns during her childhood.[3][11][15] Perez is often identified as a Nuyorican as a result of her upbringing as a New Yorker of Puerto Rican descent.[16]
Read more...

At 19 years old,[17] Perez started her career in the early 1980s, as a dancer on Soul Train. As a college student in Los Angeles, majoring in bio-chemistry, she said she would relieve stress by going to nightclubs for ladies' night. A talent scout from Soul Train asked Perez to appear on the show. She was not a professional dancer, but loved it so much she dropped out of school.[11] In 1988, when she was 24 years old, Perez was noticed at the dance club Funky Reggae[18] by Spike Lee, who hired her for her first major acting role in Do the Right Thing.[19]

Perez later choreographed music videos by Janet Jackson, Bobby Brown, Diana Ross, LL Cool J and The Boys.[15] She was the choreographer for the dancing group the Fly Girls who were featured on the Fox television comedy program In Living Color and also worked as a segment producer.[20] She made her Broadway debut in Terrence McNally's Frankie and Johnny in the Clair de Lune.[21] Perez had her third major role in the hit comedy White Men Can't Jump co-starring Wesley Snipes and Woody Harrelson.

Perez was nominated for the Oscar for Best Supporting Actress for her role in Peter Weir's 1993 film Fearless. She attended the ceremony with her father.[22] In 1997, she starred in Perdita Durango, a controversial film in which many scenes of excessive violence, sex and nudity were edited out of the version released in the United States but remained intact in the version released throughout Latin America.[23] In 1999, Perez starred in Nancy Savoca's The 24 Hour Woman.[2] She provides the voices of Click, the camera, on Nick Jr.'s Go, Diego, Go! and Chel, a beautiful native woman in the DreamWorks Animation film The Road to El Dorado. She played corrupt police officer Carol Brazier in the Judd Apatow-produced film Pineapple Express, co-starring Seth Rogen and James Franco. Perez appeared on an episode of Law & Order: Special Victims Unit in October 2009 about pedophiles' rights. Executive producer Neal Baer said the writers had Perez in mind when they wrote the role of a young sexual abuse victim's mother.[24] She suffered a serious injury during the filming of the episode.[25] Most recently, Perez is the subject of an album by Felt entitled Felt 3: A Tribute To Rosie Perez. Perez was in a Mike Nichols production of The Play What I Wrote.

Rosie Perez injured her neck in 2009 while filming an episode of Law & Order: SVU and underwent surgery to heal a herniated disc. One year after the accident, she appeared at the White House in a wheelchair, wearing a neck brace for a meeting with President Obama.[26] In May 2011, Perez filed a lawsuit against the producers of the show,[27] claiming that the injury she incurred was the result of being "recklessly pulled, grabbed, yanked, wrenched and manhandled" during filming.[28]

Rosie Perez is a fan of the sport of boxing. In June 2013, she served as the grand marshal for the international Boxing Hall of Fame parade in Canastota, New York.[29]

In February 2014, Rosie Perez published an autobiography titled Handbook for an Unpredictable Life: How I Survived Sister Renata and My Crazy Mother, and Still Came Out Smiling... She is also the reader of the audio CD of this book. Perez said that she didn't initially set out to write an autobiography, but rather a book that analyzes the causes and effects of child abuse.[11] She said it wasn't until about 6 months after the book was published and she heard responses from others that she found the experience cathartic.[11]

On September 3, 2014, ABC announced Perez would join The View as a new co-host alongside moderator Whoopi Goldberg, newcomer Nicolle Wallace, and returning co-host Rosie O'Donnell.[30] The new season began on September 15, 2014.[31][32] Perez said she was initially hesitant about the job because "I didn't want to be on a show where people were just screaming at each other disrespectfully."[11] She decided to join the cast when she learned that Bill Wolff, whom she knew from The Rachel Maddow Show, was going to be the new executive producer.[11][33][34] On July 8, 2015, Perez announced she would be leaving The View.[35]

Perez is an activist for Puerto Rican rights:

Perez suffered abuse during her childhood from both her schizophrenic mother and from the nuns at the group home. As a result, she has suffered from high anxiety, PTSD, and a form of depression called dysthymia, but with hard work in therapy it has been greatly reduced.[5][11][38]

Perez married artist Eric Haze on September 15, 2013 in Las Vegas. They had decided to get married the night before while attending the Floyd Mayweather vs. Saúl Álvarez boxing match.[39] The couple slept over at the MGM Grand hotel-casino and were married in the morning. They live in Clinton Hill, Brooklyn.[12] Perez was previously married to filmmaker and playwright Seth Zvi Rosenfeld but the couple divorced in 2001 after ten years of marriage.[40] She has no children.[40]

Perez stated on the Pineapple Express DVD commentary that she is allergic to dairy products. She was a friend of the late rapper and actor Tupac Shakur.[38]