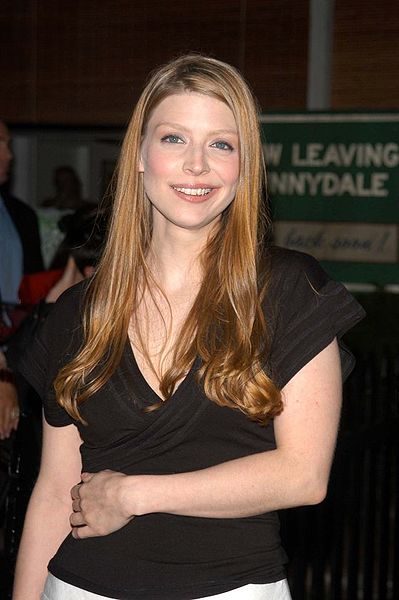 Amber Nicole Benson (born January 8, 1977) is an American actress, writer, director, and producer. She is best known for her role as Tara Maclay on the TV series Buffy the Vampire Slayer, but has also directed, produced and starred in her own films Chance (2002) and Lovers, Liars & Lunatics (2006). She also co-directed the film Drones with fellow Buffy cast member Adam Busch.

Benson was born January 8, 1977 in Birmingham, Alabama, the daughter of Diane and Edward Benson, a psychiatrist.[1] She has a younger sister, Danielle, who is an artist. Her father is Jewish and her mother was raised Southern Baptist;[2] Benson grew up attending a Reform synagogue in Alabama.[3][4][5][6][7]

As a child, Benson studied music and dance, and performed in the Birmingham Children's Ballet, as well as in local theater. She attended high school (one of her classmates being Joey Fatone) in Orlando, Florida after her family moved there, in part to help Amber pursue acting opportunities, the most prominent of which was an unsold television series called Kids' News, in which Amber was to have been one of two main anchors. The Bensons then relocated to Los Angeles, and Amber very quickly began to land roles in films and on television.

Benson at a 2005 Buffy the Vampire Slayer convention

Benson was 14 when she made her feature film debut in the Steven Soderbergh film King of the Hill.[8]

Benson is best known for her recurring role as Tara Maclay on the television series Buffy the Vampire Slayer. The character first appeared in the season 4 episode "Hush" and soon became the girlfriend of Willow Rosenberg (Alyson Hannigan). Benson remained with the series until season 6 when her character was killed off. In her final episode, Benson was credited for the only time as a regular cast member.

Benson sang in the Buffy the Vampire Slayer musical episode "Once More, with Feeling". She provided vocals for the songs "I've Got a Theory / Bunnies / If We're Together", "Under Your Spell" (her solo), "Walk Through the Fire", "Standing/Under Your Spell (Reprise)," and "Where Do We Go from Here?" In 2002, she performed two songs on Buffy colleague Anthony Stewart Head's album Music for Elevators. She also sang "Toucha Toucha Touch Me" (aka "Creature of the Night") at VH-1's celebrity karaoke tribute to The Rocky Horror Picture Show.

While still working on Buffy the Vampire Slayer, Benson co-wrote the movie The Theory of the Leisure Class with director Gabriel Bologna, released in 2001, and directed, produced, edited, and acted in a digital video feature called Chance (2002) which also featured her Buffy co-star James Marsters. She also collaborated with director James Kerwin in 2003 to produce her play, Albert Hall, in Hollywood.

In 2003, she starred in Latter Days as Traci Levine, alongside Steve Sandvoss and Wes Ramsey.[9]

Benson and novelist Anton Strout during an appearance at Midtown Comics Downtown in Manhattan, March 5, 2011

In 2006, Benson released her second independent feature film Lovers, Liars & Lunatics through her own production company, Benson Entertainment. The film was shot on film and was partly financed by the sale of limited edition "Triangle" Tara Buffyverse action figure. The project, initially called "The Dirty Script," was ultimately titled Lovers, Liars and Lunatics by producer Diane Benson, Amber's mother.

In 2006, Benson also portrayed the "vegetarian" vampiress Lenore on the TV series Supernatural.

In December 2006, Benson and Golden released yet another collaboration, the short novel The Seven Whistlers which is distributed through Subterranean Press in a limited number of signed copies. In September 2007, Benson signed a three-book deal with Ginjer Buchanan of Penguin Books. Death's Daughter, was released by Ace Books[10] on February 24, 2009; Cat's Claw,[11] on February 23, 2010; and Serpent's Storm, in February 2011. On February 28, 2012, the fourth book in the series, How to Be Death was released.[12]

Benson is the co-director with Adam Busch of the 2010 comedy film Drones.[13]

In 2012, Benson played a young Judith Collins in the Dark Shadows audio drama "Dress Me in Dark Dreams". She guest starred in the second season of the Jane Espenson scripted romantic comedy web series, Husbands.[14]

In June 2013, it was announced that Benson has been attached to star in the web TV series adaptation of The Morganville Vampires as Amelie, the founder of Morganville.[15][16]

Benson has narrated the audiobook Lock In by John Scalzi.[17] In October 2014 published her fantasy book The Witches of Echo Park.[18]

Benson revealed in a January 2015 Reddit AMA that she was "an actress in a former life".[19]

During the 2008 campaign season, Benson was featured in a Barack Obama advertisement sponsored by MoveOn.org.[20]

As of 2007, Benson resided in Los Angeles. She described herself as a "lapsed vegetarian".[21]

From 2002 to 2009, she dated Adam Busch, who played Warren Mears on Buffy the Vampire Slayer. The two have remained close friends.[22]

The Witches of Echo Park