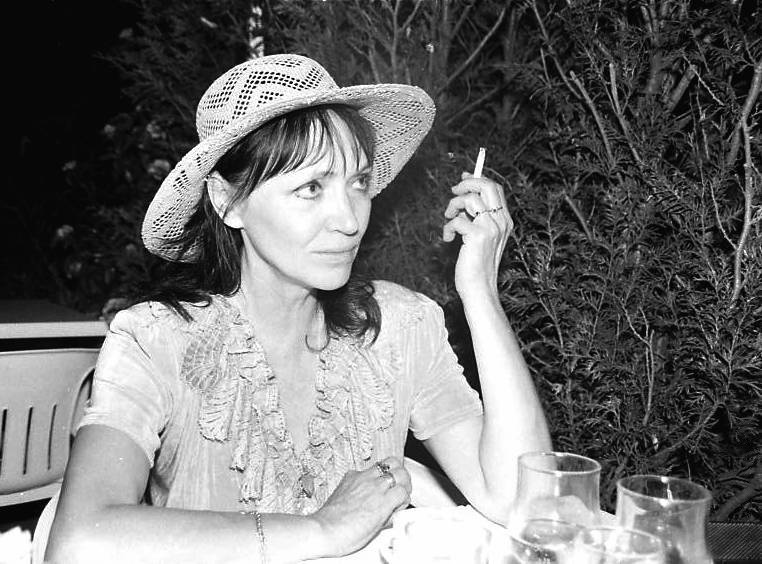 Anna Karina (born Hanne Karin Bayer,[1] 22 September 1940) is a Danish-French film actress, director, writer, and singer. She rose to prominence as French New Wave director Jean-Luc Godard's muse in the 1960s,[2] performing in several of his films, including The Little Soldier (1960), A Woman Is a Woman (1961), Vivre sa vie (1962), Band of Outsiders (1964), and Pierrot le Fou and Alphaville (both 1965). For her performance in A Woman Is a Woman, Karina won the Silver Bear Award for Best Actress at the Berlin Film Festival.[3]

In 1972, Karina set up a production company for her directorial debut, Vivre ensemble (1973), which screened in the Critics’ Week lineup at the 26th Cannes Film Festival.[4] She also directed the French-Canadian film Victoria (2008). In addition to her work in cinema, she has worked as a singer, and has written several novels in French.[5]

Karina is widely considered an icon of 1960s cinema.[6][7] The New York Times has described her as "one of the screen’s great beauties and an enduring symbol of the French New Wave."[8]

Karina's mother was a dress shop owner and her father left the family a year after she was born. She lived with her maternal grandparents for three years, until she was four. She spent the next four years in foster care before returning to live with her mother. She has described her childhood as "terribly wanting to be loved", and as a child she made numerous attempts to run away from home.[9]

She began her career in Denmark, where she sang in cabarets and worked as a model playing in commercials. At age 14, she appeared in a Danish short film by Ib Schmedes, which won a prize at Cannes.[10] In 1958, after a row with her mother, she hitchhiked to Paris.[10]

Les Deux Magots, the cafe where Anna Karina was discovered

Karina was 17 when she arrived in Paris poor and unable to speak French. She lived on the streets. One day while sitting at the café Les Deux Magots[11] she was approached by a woman from an advertisement agency who asked her to do some photos. She began to work as a model and eventually became successful, posing for several magazines, including Elle,[12] and meeting Pierre Cardin and Coco Chanel.[13] Karina has said that Chanel helped her devise her professional name, Anna Karina.[14]

Jean-Luc Godard, then a film critic for Cahiers du cinéma, first saw Karina in a series of Palmolive ads in which she posed in bathtubs.[15] He was casting his debut feature film, Breathless, and offered her a small part in it, but she refused when he mentioned that there would be a nude scene. When Godard questioned her refusal, mentioning her apparent nudity in the Palmolive ads, she is said to have replied, "Are you mad? I was wearing a bathing suit in those ads—the soapsuds went up to my neck. It was in your mind that I was undressed."[16]

In the end, the character Godard reserved for Karina did not appear in the film.[17] The next year, however, Godard offered her a role in Le Petit Soldat (1960). Karina, then still under 21, had to persuade her estranged mother to sign the contract for her.[18]

Karina won the Best Actress Award at the Berlin Film Festival in 1961 for her performance as Angela in A Woman Is a Woman.[3] Her career continued to flourish thereafter,[15] as she appeared in dozens of films through the 1960s, including Godard's Bande à part (1964), The Nun (1966), directed by Jacques Rivette, Luchino Visconti's The Stranger (1967), the George Cukor/Joseph Strick collaboration Justine (1969), and Tony Richardson's Laughter in the Dark (1969). She continued to work steadily into the 1970s, with roles in Christian de Chalonge's The Wedding Ring (L'Alliance, 1971), Andre Delvaux's Rendezvous at Bray (Rendez-vous à Bray, also 1971), The Salzburg Connection (1972), and Franco Brusati's Bread and Chocolate (Pane e cioccolata, 1973).

In 1972, she set up a production company, Raska, for her directorial debut, Vivre ensemble (1973), in which she also acted. The film screened in the Critics’ Week lineup at the 26th Cannes Film Festival.[4]

In 2008, Karina wrote, directed and starred in Victoria, a musical road movie filmed in Montreal, Quebec and Saguenay-Lac-St-Jean. Richard Kuipers praised it in Variety as "a pleasant gambol through the backwoods of Quebec."[21]

Karina has also maintained a singing career.[22] At the end of the 1960s, she scored a major hit with "Sous le soleil exactement" and "Roller Girl" by Serge Gainsbourg. Both songs are from the TV musical comedy Anna (1967), by the film director Pierre Koralnik, in which she sings seven songs alongside Gainsbourg and Jean-Claude Brialy. Karina subsequently recorded an album, Une histoire d'amour, with Philippe Katerine, which was followed by a concert tour. In 2005, she released Chansons de films, a collection of songs sung in movies.

In 1961, after working together on Le Petit Soldat, Karina and Godard were married; The Independent described them as "one of the most celebrated pairings of the 1960s."[22] During their marriage, they made seven feature films together.[22] A writer for Filmmaker magazine called their work "arguably the most influential body of work in the history of cinema."[23]

Despite the critical success, their relationship behind the scenes has been described as tumultuous; they fought on film sets, Karina fell ill several times, and Godard was often absent without explanation.[15][11][24] The couple divorced in 1965.[11] Karina has said they no longer speak to each other.[25] She described the relationship in an interview with W Magazine:

It was all very exciting from the beginning. Of course we have a great love story and all that, but we were so different. He was 10 years older than me. He was very strange. He would go away and come back three weeks later ... It was difficult, and I was a young girl, not even 21—at the time Godard was 30. I know he didn’t mean to hurt me, but he did. He was never there, he was never coming back, and I never knew where he was. He drove me a bit crazy.[25]

Karina is widely considered an icon of 1960s cinema[6] as well as a style icon.[7][26] The Guardian described her as an "effervescent free spirit of the French new wave."[11] Refinery29 wrote that "her 60s French girl style - think sailor dresses, tartan, long socks, and hats - and mesmerising doe-eyed beauty mean she continues to be referenced today by the super-stylish."[7]