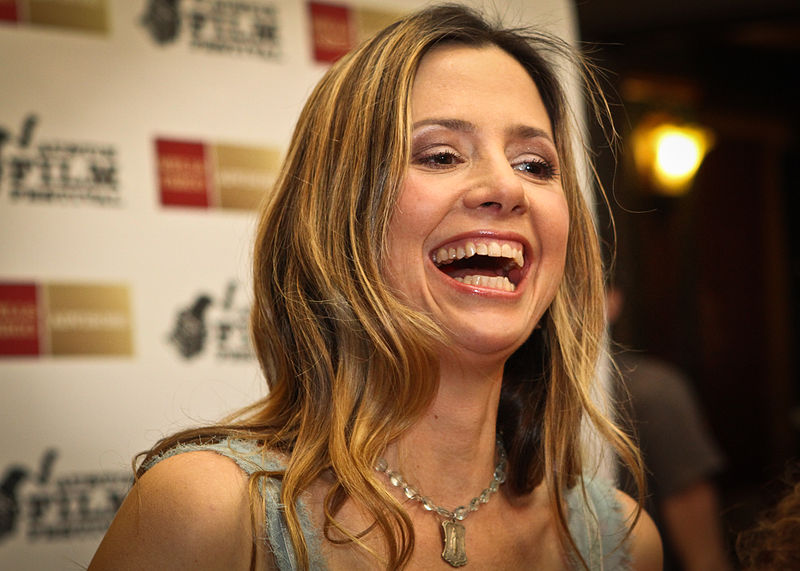 Sorvino was born in New York City[1] to Lorraine Ruth Davis, a drama therapist for Alzheimer's disease patients and a former actress, and Paul Sorvino, a character actor and film director.[2][3] She has two siblings, Michael and Amanda. Sorvino is of Italian descent on her father's side.[4]

Sorvino was raised in Tenafly, New Jersey,[5] where she wrote and acted in backyard plays with her childhood friend Hope Davis and in theater productions at Dwight-Englewood School.[6] Sorvino has said that as a child she was strongly influenced by her mother to pursue social causes; her mother had participated at the March on Washington.[7] Sorvino excelled in high school, and was accepted into Harvard University. She studied for one year as an exchange student with CIEE in Beijing, China, where she became fluent in Mandarin Chinese.[8] In 1989, she graduated from Harvard magna cum laude with a degree in East Asian studies.[9] She also helped found the Harvard-Radcliffe Veritones, one of Harvard's co-ed a cappella groups in 1985.[10]

Sorvino's first major screen appearance was in the teen television series Swans Crossing, on which she appeared in six episodes.[7] When the 1993 film Amongst Friends entered preproduction, she was hired as third assistant director, then was promoted to casting director, then to assistant producer, and was finally offered a lead role. Positive reviews[11][12] led to other acting opportunities.

After small roles in Robert Redford's Quiz Show and Whit Stillman's Barcelona, she was cast in the 1995 Woody Allen film Mighty Aphrodite. Her portrayal of a happy-go-lucky prostitute made her a star, winning her an Academy Award[13] and Golden Globe[14] for Best Supporting Actress. While the film garnered Sorvino international notoriety, she described the shooting of the film as extremely stressful: "I was absolutely neurotic doing Mighty Aphrodite," she recalled. "Every night brought a new nervous breakdown. I'd cry and talk to God, I was so nervous. Then the next day, I'd show up and do my scenes."[7]

Other credits include Romy and Michele's High School Reunion with Lisa Kudrow, At First Sight with Val Kilmer, and Summer of Sam from Spike Lee. She portrayed Marilyn Monroe for the 1996 HBO film Norma Jean & Marilyn, for which she was nominated for a Golden Globe,[14] and the lead role in the 1997 horror movie Mimic from Guillermo del Toro. In 1995, she portrayed Conchita Closson in the BBC miniseries The Buccaneers based on Edith Wharton's last novel. She starred as Daisy Buchanan in the 2000 television film The Great Gatsby.

In 2002, Sorvino appeared as the lead in The Triumph of Love, an adaptation of the 1732 Marivaux play.[15] In 2006, she received a Golden Globe nomination for her role as an Immigration and Customs Enforcement agent in the Lifetime film Human Trafficking.[14] The following year, she had a supporting role in the drama Reservation Road (2007), with Mark Ruffalo.

In February 2008, she guest-starred in the "Frozen" episode of the medical television drama House. Making her character, psychiatrist Cate Milton, a recurring character, was mentioned, but the writers' strike put a freeze on such discussions.[16]

She starred in Attack on Leningrad (2009), Multiple Sarcasms (2010) with Timothy Hutton and Stockard Channing, and Nancy Savoca's Union Square (2012), with Patti Lupone and Tammy Blanchard.[17] The film premiered at the Toronto International Film Festival[17] to good reviews.[18][19] In the same year, Sorvino played the mother of the lead in the film adaptation of Wendy Mass’s popular children’s book Jeremy Fink and the Meaning of Life.[20]

In 2014, she reappeared as Head Detective Betsy Brannigan on the final season of Psych, and on the fourth season of Falling Skies as John Pope's love interest, Sara.[21] Sorvino also joined the cast of the television series Intruders, playing the role of Amy Whelan. In 2016, she appeared in the Netflix series Lady Dynamite as an actor working on a sitcom pilot named White Trash.[22] In 2018, Sorvino played the role of Amy in the psychological thriller, Look Away, alongside Jason Isaacs and India Eisley.[23]

Between 1996 and 1998, Mira Sorvino was romantically involved with director Quentin Tarantino, who was her escort to the Academy Awards ceremony where she won Best Supporting Actress for Mighty Aphrodite.[24]

Sorvino met actor Christopher Backus at a friend's charades party in August 2003. On June 11, 2004, they married in a private civil ceremony at the Santa Barbara, California, courthouse, then later had a hilltop ceremony in Capri, Italy. The couple has four children: daughters Mattea Angel (born 2004)[25] and Lucia (born 2012)[26] and sons Johnny Christopher King (born 2006)[27] and Holden Paul Terry Backus (born 2009).[28]

In honor of Sorvino's role as Susan Tyler, an entomologist who was investigating deadly insect mutations in the feature film Mimic, a compound excreted by the sunburst diving beetle as a defensive mechanism was named "mirasorvone" by Thomas Eisner.[29],[30]

Sorvino at the Anti-Human Trafficking Symposium in Washington, D.C., January 30, 2013

In September 2014, Sorvino gave a wide-ranging interview on The Nerdist Podcast in which she discusses her education and her life in China, and many of her varied interests.[31] Sorvino was an atheist in 1997 but identified as a Christian in 2012.[32][33][34] She resides with her family in Los Angeles, California.[35]

In 2017, Mira Sorvino came out publicly about the sexual harassment she endured from producer Harvey Weinstein.[36] As one of his many victims, Sorvino believes that her career may have been damaged after rebuffing Weinstein's advances.[37][38]

She has been affiliated with Amnesty International since 2004,[39] and in 2006, was honored with Amnesty International’s Artist of Conscience Award given to those who have displayed longstanding philanthropic and humanist efforts. Sorvino has been a U.N. Goodwill Ambassador to Combat Human Trafficking, since 2009 through 2012, and has lobbied Congress to abolish human trafficking in Darfur.[40]