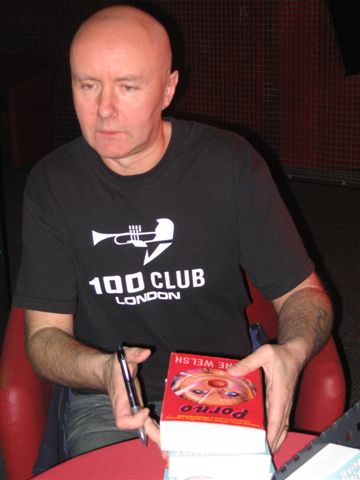 Irvine Welsh (born 27 September 1958) is a Scottish novelist, playwright and short story writer. His novel Trainspotting was made into a film of the same name. His work is characterised by a raw Scots dialect and brutal depiction of Edinburgh life. He has also written plays and screenplays, and directed several short films.

Irvine Welsh was born in Leith, the port area of the Scottish capital Edinburgh.[1][2] He states that he was born in 1958, though, according to the Glasgow police, his birth record is dated around 1951.[2] When he was four, his family moved to Muirhouse, in Edinburgh, where they stayed in local housing schemes.[3] His mother worked as a waitress. His father was a dock worker in Leith until bad health forced him to quit, after which he became a carpet salesman; he died when Welsh was 25. Welsh left Ainslie Park High School when he was 16 and then completed a City and Guilds course in electrical engineering. He became an apprentice TV repairman until an electric shock persuaded him to move on to a series of other jobs.[3] He left Edinburgh for the London punk scene in 1978, where he played guitar and sang in The Pubic Lice and Stairway 13,[3] the latter a reference to the Ibrox disaster. A series of arrests for petty crimes and finally a suspended sentence for trashing a North London community centre inspired Welsh to correct his ways. He worked for Hackney London Borough Council in London and studied computing with the support of the Manpower Services Commission.[3]

Welsh returned to Edinburgh in the late 1980s, where he worked for the city council in the housing department. He then studied for an MBA at Heriot-Watt University.[4]

To date, Welsh has published eleven novels and four collections of short stories. His first novel, Trainspotting, was published in 1993. Set in the mid-1980s, it uses a series of loosely connected short stories to tell the story of a group of characters tied together by decaying friendships, heroin addiction and stabs at escape from the oppressive boredom and brutality of their lives in the housing schemes. It was released to shock and outrage in some circles and great acclaim in others; Time Out called it "funny, unflinchingly abrasive, authentic and inventive",[This quote needs a citation] and The Sunday Times called Welsh "the best thing that has happened to British writing for decades".[This quote needs a citation] It was adapted as a play, and a film adaptation, directed by Danny Boyle and written by John Hodge, was released in 1996. Welsh appeared in the film in the minor role of drug dealer Mikey Forrester.

The novel has since achieved a cult status, aided by the popularity of the film.[5]

Next, Welsh released The Acid House, a collection of short stories from Rebel Inc., New Writing Scotland and other sources. Many of the stories take place in and around the housing schemes from Trainspotting, and employ many of the same themes; a touch of fantasy is apparent in stories such as The Acid House, where the minds of a baby and a drug user swap bodies, or The Granton Star Cause, where God transforms a man into a fly[4] as punishment for wasting his life. Welsh adapted three of the stories for a later film of the same name, in which he also appeared.

His next book, Ecstasy: Three Tales of Chemical Romance (1996), became his most high-profile work since Trainspotting, released in the wave of publicity surrounding the film. It consists of three unconnected novellas: the first, Lorraine Goes To Livingston, is a bawdy satire of classic British romance novels, the second, Fortune's Always Hiding, is a revenge story involving thalidomide and the third, The Undefeated, is a sly, subtle romance between a young woman dissatisfied with the confines of her suburban life and an aging clubgoer.

A corrupt police officer and his tapeworm served as the narrators for his third novel, Filth (1998). The main character of Filth was a vicious sociopathic policeman. The novel was adapted to a film with the same name in 2013.

Glue (2001) was a return to the locations, themes and episodic form of Trainspotting, telling the stories of four characters spanning several decades in their lives and the bonds that held them together.

The Bedroom Secrets of the Master Chefs (2006), deals with a young, alcoholic civil servant who finds himself inadvertently putting a curse on his nemesis, a nerdy co-worker. In 2007, Welsh published If You Liked School You'll Love Work, his first collection of short stories in over a decade.

Welsh contributed a novella called Contamination to The Weekenders: Travels in the Heart of Africa. Welsh, Ian Rankin, and Alexander McCall Smith each contributed a short story for the One City compilation published in 2005 in benefit of the One City Trust for social inclusion in Edinburgh.

In Crime, Ray Lennox (from Welsh's previous work, Filth) is recovering from a mental breakdown induced by occupational stress and cocaine abuse, and a particularly horrifying child sex murder case back in Edinburgh. The story takes place in Florida.

In 2012 Welsh published a prequel to Trainspotting, titled Skagboys.[6][7][8] Set in Leith in the early 1980s, it introduces the Trainspotting characters and follows them as they fall into heroin addiction. Given as a series of linked short stories, the book is also interspersed with brief commentaries on contemporary British politics. In particular, the consequences of the destruction of industry in the northern cities are drawn for the young working class.

His eighth novel, The Sex Lives of Siamese Twins, was published in May 2014.

In April 2015 his ninth novel was published via Vintage Books, titled A Decent Ride and featuring the returning character 'Juice' Terry Lawson (previously from Glue). Despite this, it is a standalone story and not a sequel.

Welsh's tenth novel, released in April 2016, is titled The Blade Artist, and centers around a seemingly rehabilitated Francis Begbie now living in California with a wife and children.[9] It was shortlisted for the Fiction Book of the Year at Saltire Literary Awards 2016.[10]

A sequel to The Blade Artist, entitled Dead Men's Trousers, was released on 29 March 2018, and sees Mark Renton, Sick Boy, and Spud reuniting with Francis Begbie.

As well as fiction, Irvine Welsh has written several stage plays, including Headstate, You'll Have Had Your Hole, and the musical Blackpool, which featured original songs by Vic Godard of the Subway Sect.

More recently he co-authored Babylon Heights with his screen writing partner Dean Cavanagh. The play premiered in San Francisco at the Exit Theatre and made its European première in Dublin, at The Mill Theatre Dundrum, directed by Graham Cantwell. The plot revolves around the behind-the-scenes antics of a group of Munchkins on the set of The Wizard of Oz. The production included the use of oversized sets with actors of regular stature.

Cavanagh and Welsh have also collaborated on screenplays. The Meat Trade is based on the 19th century West Port murders. Despite the historical source material, Welsh has set the story in the familiar confines of present-day Edinburgh, with Burke and Hare depicted as brothers who steal human organs to meet the demands of the global transplant market.

Wedding Belles, a film made for Channel 4 that was written by Welsh and Cavanagh, aired at the end of March 2007. The film centres around the lives of four young women, who are played by Michelle Gomez, Shirley Henderson, Shauna MacDonald, and Kathleen McDermot. Wedding Belles was nominated for a Scottish BAFTA and was subsequently sold to TV channels in Canada and Europe.

Welsh has directed several short films for bands. In 2001 he directed a 15-minute film for Gene's song "Is It Over" which is taken from the album Libertine. In 2006 he directed a short film to accompany the track "Atlantic" from Keane's album Under the Iron Sea.

Welsh directed his first short dramatic film, NUTS, which he co-wrote with Cavanagh. The film features Joe McKinney as a man dealing with testicular cancer in post Celtic tiger Ireland. It was released in 2007.

Welsh co-directed "The Right to liberty", a chapter of the documentary film The New Ten Commandments, in 2008.

In 2009 Welsh directed the film Good Arrows (co-directed by Helen Grace). It was written by Welsh and Cavanagh. The film is about a darts player who suffers from depression which causes him to lose his skill.[11]

As well as recreational drug use, Welsh's fiction and non-fiction is dominated by the question of working class and Scottish identity in the period spanning the 1960s to the present day. Within this, he explores the rise and fall of the council housing scheme, denial of opportunity, sectarianism, football, hooliganism, sex, suppressed homosexuality, dance clubs, low-paid work, freemasonry, Irish republicanism, sodomy, class divisions, emigration and, perhaps most of all, the humour, prejudices and axioms of the Scots.

Sam Leith, writing in the Financial Times, argues that: "Welsh's concerns are with sin and salvation, with the exercise of free will and with the individual soul. He's much more interested in teleology than sociology."[12]