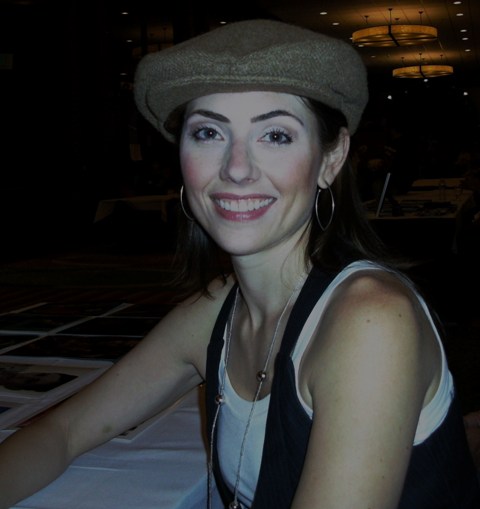 Adrienne Marie Wilkinson (born September 1, 1977) is an American actress. She is known for playing Livia/Eve, the daughter of Xena in the TV series Xena: Warrior Princess. She has appeared in numerous television series such as Angel, Charmed, ER, and Venice: The Series, and played Captain Lexxa Singh in Star Trek: Renegades.

She is the creator of From the Mouths of Babes, an online interview series that collects impromptu interviews that address Love, Life, and Self.

Adrienne Wilkinson was born in Memphis, Missouri. She graduated from Kickapoo High School in Springfield.

She moved to Los Angeles, California to pursue acting after graduating from high school. She was two years old when she started taking dance lessons and performed on stage as a dancer throughout her youth until she moved to Los Angeles to become an actress. She has two younger sisters and a younger brother. Her younger sister, Tracey Bradley, is a director and producer for Pulse Studios. Her youngest sister, Aimee Wilkinson, is a musician. The three sisters worked on the film Expectation together in 2005.

Adrienne Wilkinson is best known for her role of Livia/Eve, the sometimes-warrior-sometimes-saint daughter of Xena on Xena: Warrior Princess.[1] She started on television in an episode of Sweet Valley High in 1996, and moved on to Saved By The Bell: The New Class, Chicken Soup for the Soul and in 2001 she had several guest appearances on Undressed. In 2002 she starred as Nikki on the US version of As If. In 2003 she had a guest spot on Angel as a cheeky flapper from the 1920s, and as Linda Browning in an episode of Days of Our Lives. In 2005 she had guest appearances on Charmed as Phoebe Halliwell's first disguise of the season, Eyes and was a temporary love interest of Dr. Ray Barnett on ER, and Paisley Parker on Goodnight Burbank. She is a series regular on Venice: The Series playing Adrienne, who appears in seasons 2-4.

Her film career includes Lakeshore Drive, (written and directed by Michael Grais and starring Wilkinson and Peter Dobson), Pomegranate, and she was the female lead in Interceptor Force 2 (AKA: Alpha Force), Missy Blue in The American Failure, and Nancy in Raze. Wilkinson's producer credits include the films Perfection and Seconds, which showcases a woman's triumph over depression and self-injury.

In 2008, she starred in the short film Reflections, directed by Barry Caldwell. She received two acting awards for her performance, and an additional two nominations.

Wilkinson is sought after for her voice over work which includes more than 50 characters in several videogames, animated videos and commercials. She also plays the part of Maris Brood, the female Jedi in Star Wars: The Force Unleashed. She also provided the acting for the physical character as well, as the video game used the most technologically advanced motion capture available to capture her likeness and performance. Wilkinson had a guest role on the animated Star Wars: The Clone Wars and Star Wars: Rebels series, as Daughter, the personification of the Light side of the Force. She plays Mina Tang in the Alpha Protocol video game, voiced several characters, including Gianna, in Star Wars: The Old Republic, and was the voice of Sarah in the massively multiplayer online game The Secret World: The Black Signal.

Her most recent work includes the pilot for the dramatic series Frequency, the pilot for Bump & Grind, the film Burning Dog, and the feature-length pilot, Star Trek: Renegades, where she plays Captain Lexxa Singh, a descendant of Khan Noonien Singh.

Wilkinson is also known for her charity works which includes a focus on literacy programs, animal welfare and children. Her website hosts an annual charity auction each year which helps to support families dealing with medical expenses. She was also one of many celebrities photographed for the TJ Scott book In the Tub with proceeds going to breast cancer research at UCLA's Jonsson cancer center.

From the Mouths of Babes

In 2011, Wilkinson created From The Mouths of Babes, an online interview series that collects impromptu interviews that address Love, Life, and Self. The project launched on YouTube on May 15, 2012 under the user ID mouthsofbabesnet. As of September 2014, the channel has surpassed 100,000 views.

From the Mouths of Babes began to release compilation episodes in September 2013, starting with "Xena on Love." Season one wrapped in October 2014, and season 2 is currently airing on YouTube.

Report a problem
Write to Adrienne Wilkinson at FanPal • 2021