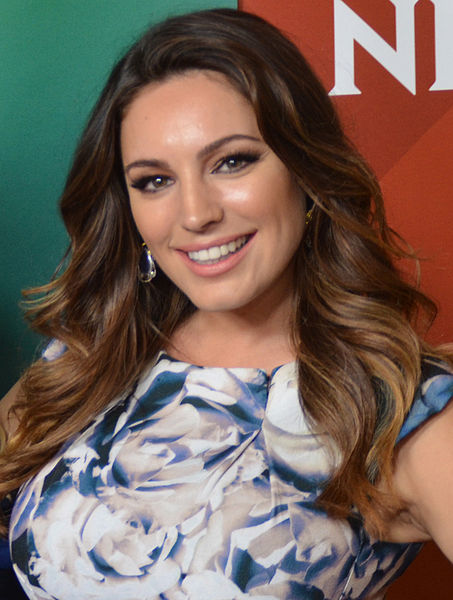 Kelly Brook (born 23 November 1979)[1] is an English model, actress and television presenter best known for her modelling work in the UK, and in the US for her role in the NBC sitcom One Big Happy, as well as a regular panelist on Celebrity Juice. She has featured as a guest on a number of shows including Strictly Come Dancing and The Nightly Show.

Brook was born and raised in Rochester, Kent as Kelly Ann Parsons, the daughter of Sandra Kelly, a cook, and Kenneth Parsons, a scaffolder. She has a younger brother, Damian, and an older half-sister, Sasha.[5] Kenneth Parsons died, aged 57, in Rochester from lung cancer,[6] on 26 November 2007, during Brook's time on Strictly Come Dancing.[7] Brook attended the Thomas Aveling School in Warren Wood, Rochester. In 1996 at the age of seventeen she appeared in the second series of "Fist of Fun", the BBC comedy show from Stewart Lee and Richard Herring as a schoolgirl in a series of sketches entitled 'Teachers' (one of her co-stars was the young Daniel Mays). She studied at the Italia Conti Academy of Theatre Arts in London for three years during this time before becoming a professional model at the age of 16.[8]
Read more...

Brook's modelling career began at 16 after she won a beauty competition, into which she had been entered by her mother.[5] She later worked on a range of advertising campaigns, including Foster's Lager, Renault Mégane, Walker's crisps, Piz Buin and Bravissimo, a company that specialises in bras and lingerie for large-breasted women. Her figure eventually caught the eye of the editorial team of the Daily Star tabloid,[8] which began featuring her as a Page Three girl.

In February 2007, it was announced that Brook had signed a contract, reported to be worth around £1m, to represent Unilever's Lynx body spray, known as "Axe" in the US and in continental Europe.[11] She has appeared on billboards, in newspapers and on-line as part of their advertising campaign.[12] She has also appeared in commercials for Sky + and T Mobile and modelled for Reebok.

In 2010, she was chosen as the "new face and body" of lingerie maker Ultimo's advertising campaign.[13]

Brook produces a line of swimwear with New Look, for which she herself has modelled.[17]

In September 2014, Brook launched a clothing line for Simply Be.[18] The following year, she became a brand ambassador for Skechers.[19]

In 1997, aged eighteen, Brook started presenting youth television programmes on MTV, Granada Television and the Trouble TV channel.[8] Brook had a breakthrough into mainstream presenting in January 1999, when she was chosen to replace Denise van Outen as the female half of The Big Breakfast hosting team, alongside Johnny Vaughan. She left the show in July 1999.[20] In 2005, she hosted the reality television programme Celebrity Love Island for ITV.

In 2007, Brook participated in the celebrity dancing competition Strictly Come Dancing on BBC1, with dance partner was Brendan Cole. During the TV series, her father Kenneth Parsons died from cancer,[7] and although she initially decided to continue dancing in his memory, she withdrew from the competition in week nine.[21]

She also competed in the Strictly Come Dancing Christmas Special 2008, dancing the Jive with Brian Fortuna, Brendan Cole having to compete with his later partner Lisa Snowdon. Brook and Fortuna were put into fourth place, but with the studio audience's vote they came second to Jill Halfpenny and Darren Bennett. In 2008, Brook took Jennifer Ellison's place as one of the three judges on the second series of the reality TV programme Dirty Dancing: The Time of Your Life,[22] broadcast between September and November 2008.

In January 2009, she joined the third series of Britain's Got Talent as a fourth judge, but was subsequently axed from the programme after less than a week on the panel, the producers having decided the four-judge format was "too complicated".[23] Brook was billed as a guest judge in the episode in which she appeared, taped in Manchester and aired on 16 May.

In 2013, Brook became a temporary team captain on Celebrity Juice aired on ITV2. She appeared in Season 9, replacing Fearne Cotton while she was on maternity leave. In 2016, Brook served as a team captain on the Channel 5 panel show It's Not Me, It's You.

In 1997, Brook appeared in a Pulp video "Help the Aged" with Huck Whitney of the band the Flaming Stars, in a slow dance sequence.[24] Brook made her full screen debut with a minor role in the film Sorted. Shortly thereafter, she appeared in the film Ripper. She played the girlfriend of Clark Kent/Superman's nemesis Lex Luthor in four episodes of the American science fiction drama Smallville during the show's first season (2001-02). She has also completed assignments as a film actress in Canada and made a short appearance as Lyle's girlfriend in the 2003 film The Italian Job.

Her first starring role was in the 2004 film School for Seduction, for which she received positive reviews for her role.[25] In 2004, she played character Nikki Morris in the video game Need for Speed Underground 2, alongside Brooke Burke. In 2005, she appeared in the Philippe Vidal thriller House of 9, and starred opposite Billy Zane in the film Survival Island.

In 2006, she starred in an Agatha Christie's Marple drama on ITV and appeared as herself throughout the second series of Moving Wallpaper, also for ITV, in 2009. She acted in the science fiction thriller Shadow Play, directed by Nick Simon.[26]

Kelly also played as herself in the British comedy film Keith Lemon: The Film.

In 2013 Brook appeared in the video to Lawson's song "Juliet".

In December 2000, she played exotic dancer Anya in the play "Eye Contact" at the Riverside Studios in Hammersmith.[32][33] In October 2008, she returned to the West End as Jeannie, in Neil LaBute's Fat Pig at London's Comedy Theatre.[32][33] Her performances have had mixed reviews, the Daily Mail said "Kelly Brook has a pencil waist and rabbit-thigh legs, but she is not a great interpreter of a role".[34] In November 2009, she began playing Celia in Calendar Girls at the Noël Coward Theatre, a role previously played by Jerry Hall.[35]

Brook made a cameo appearance in the cabaret show "Forever Crazy" by Crazy Horse London end of 2012.[36]

In September 2014, Brook released her autobiography.[37] which reached the Sunday Times Bestseller list on 21 September.[38] Domestic-violence groups and others criticised her during her promotional tour for laughing about punching two ex-boyfriends in the face.[39]

Brook is an animal lover and posed nude with her body painted in scales for the "Whose Skin Are You In?" campaign by PETA.[40]

Brook met American actor Billy Zane while filming thriller Survival Island in Eleuthera, Bahamas in 2004.[43] Brook and Zane were engaged to be married in mid-2008 and acquired a house in Kent, but Brook postponed the wedding upon the death of her father in November 2007. The couple ended their relationship in April 2008 and briefly got back together before ending their relationship in August 2008.[43][44]

Brook was romantically linked with rugby player Thom Evans.[45] On 16 March 2011, Brook announced, via her Twitter account, that she was pregnant and that she and Evans were expecting a baby girl.[46] On 9 May 2011, it was reported that Brook had miscarried.[47] Kelly announced on 1 February 2013 via Twitter that she and Evans broke up.