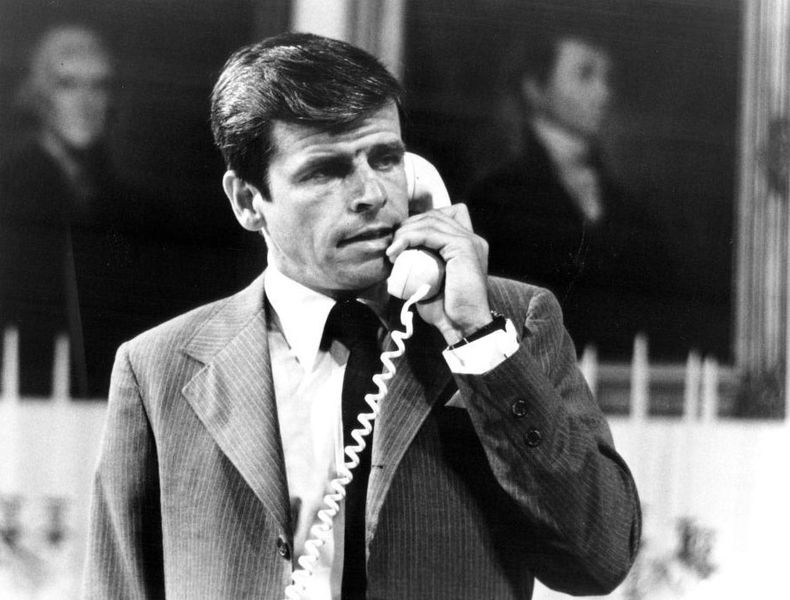 Devane was born in 1939 in Albany, New York,[2] the son of Joseph Devane, who had been Franklin D. Roosevelt's chauffeur when he was Governor of New York.[3] His father was of Irish descent and his mother had Dutch and German ancestry.[4] Devane graduated from the American Academy of Dramatic Arts in New York City in 1962.[2]
Read more...

Devane began his acting career with the New York Shakespeare Festival where he performed in 15 plays.[2] In 1966, Devane portrayed Robert F. Kennedy in the Off-Broadway spoof MacBird.[2] He gained acclaim for his role as President John F. Kennedy in a television docudrama about the Cuban Missile Crisis, The Missiles of October (1974),[2] and again when he played blacklisted radio personality John Henry Faulk in the Emmy Award-winning TV movie Fear on Trial (1975). He is widely known for his ten years as the ambitious and hardnosed politician-turned-corporate titan Greg Sumner on Knots Landing.

Devane has played members of the Presidential Cabinet on two evening dramas. In 2004, on The West Wing, he guest-starred as the Secretary of State and potential Vice-Presidential nominee. In Season 4 (2005), he joined the cast of 24 as Secretary of Defense James Heller. He also "Special Guest Starred" as Heller in season 5 & 6. On The West Wing, Devane appeared in several scenes with Martin Sheen; they also appeared together as President John F. Kennedy and his brother Robert, respectively, 30 years earlier in The Missiles of October (1974).

In 2004, Devane appeared in three episodes of Stargate SG-1 as President Henry Hayes and appears in the direct-to-DVD movie Stargate: Continuum. He also co- starred in the short-lived sitcom Crumbs and as Brian's real estate broker father in What About Brian (2006-07). In 2008, he appeared in Russ Emanuel's Chasing the Green alongside Jeremy London, Ryan Hurst, and Robert Picardo. He also appears as police officer turned psychologist Dr. Dix in the Jesse Stone mystery movies with Tom Selleck. In 2010, he appeared in the NCIS episode "Worst Nightmare" as a grandfather, who is not what he appears to be and is actually a former U.S. deep cover special operations agent, of a child kidnapped from Marine Corps Base Quantico.

In 2012, Devane began a recurring role as Grandpa Edward Grayson on the ABC primetime soap opera Revenge.[5] Devane also played the President of the United States in the Christopher Nolan film The Dark Knight Rises.

Devane reprised his role as James Heller, now President, in the limited-run series 24: Live Another Day, which premiered in May 2014.

Devane was also part of the regular cast of the sitcom The Grinder.

Devane had a cameo role as Williams, part of NASA, in the 2014 film Interstellar.

Devane is currently a spokesman for Rosland Capital.

Devane married Eugenie Devane in 1961. They have two sons.[2]