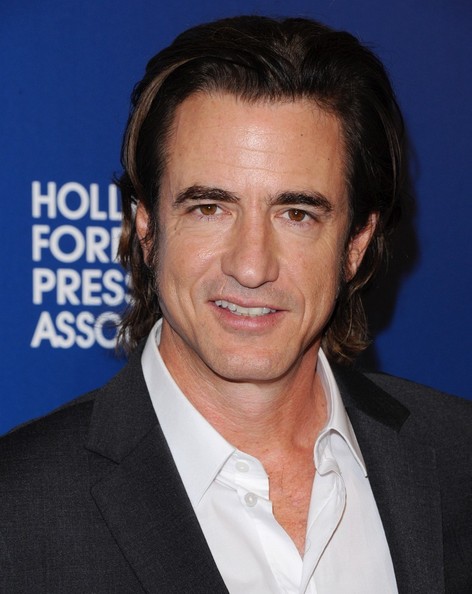 Mulroney was born in Alexandria, Virginia. His mother, Ellen, was a homemaker and amateur actress originally from Manchester, Iowa, and his father, Michael Mulroney, was a law professor (and amateur racecar driver) at Villanova University School of Law, originally from Elkader, Iowa.[1][2][3] He has a sister, Moira, and three brothers, Conor, Kieran (who is also an actor), and Sean. Mulroney attended Maury Elementary School and played cello in school and city youth orchestras, as well as acted in children's community theater. Mulroney attended the Interlochen Arts Camp as a cellist. He later attended T. C. Williams High School (grad. 1981) as well as Northwestern University (grad. 1985) in Evanston, Illinois, where he was a member of the fraternity of Phi Gamma Delta.
Read more...

Several of his lead performances have been in romantic comedy films. Mulroney has appeared in many movies, including as the male lead in My Best Friend's Wedding alongside Julia Roberts and Cameron Diaz. He is probably best known for his western roles as either an outlaw or gunman. Mulroney co-starred in the 1988 western Young Guns, for which he is possibly best known, in which he played "Dirty Steve" alongside Emilio Estevez. In 1993 Mulroney played "J.P", the boyfriend of star "Maggie" (played by Bridget Fonda) in Point of No Return. In 1994 he starred with Mickey Rourke in The Last Outlaw, which has since become a cult classic among western genre fans. Mulroney also played the love interest of Madeleine Stowe in the western Bad Girls. He first gained critical acclaim in the film Longtime Companion, portraying a young man with HIV during the early days of the outbreak of the virus, who becomes the first of his group of friends to succumb to the disease. In 2005, he played a male escort alongside Debra Messing in The Wedding Date, and co-starred in the ensemble film The Family Stone, with Sarah Jessica Parker. He was also in the movie Abduction (2011) as Martin Price.

Mulroney played Gavin Mitchell on the TV series, Friends. His character dated Rachel for one episode but they broke up when it became too complicated between them because of Ross. In 1993, he wrote the song "Someone Else's Used Guitar" for Peter Bogdanovich's The Thing Called Love, in which he also starred. Mulroney also had a cameo in the Joaquin Phoenix-directed video "Tired of Being Sorry" for Balthazar Getty's band Ringside. Mulroney also is credited as a song performer on the movie and for four other tunes, as well as acting in the movie. In 2007, Mulroney voiced Green Lantern Hal Jordan in the animated series The Batman in the season 5 episode "Ring Toss". He occasionally reads stories on the WBEZ Chicago Public Radio. In 2012, Mulroney played the love interest of Zooey Deschanel, Russell, in the Fox series New Girl. In 2013, he portrayed the title starring role in the psychotronic horror film The Rambler, which premiered at the 2013 Sundance Film Festival. He also starred alongside Lin Shaye, Angus Sampson, and Stefanie Scott in the 2015 horror sequel Insidious: Chapter 3.[4] He is the narrator of Legends & Lies (2015-2016) executive produced by Bill O'Reilly for Fox News Channel.

Mulroney married actress Catherine Keener in 1990 after they met in 1987 when filming Survival Quest. They have a son named Clyde Keener Mulroney (born June 21, 1999) who is a singer. The couple separated in May 2005 and Mulroney filed for divorce June 11, 2007, citing irreconcilable differences. Their divorce became final on December 19, 2007.[5] He later remarried to producer Tharita Cutulle in 2008. They have two daughters; Mabel, born in 2008, and Sally June, born in 2009. The family lives in Los Angeles.

Mulroney is an accomplished cellist and in 2005 appeared alongside Boyd Tinsley for Alanis Morissette's show at the House of Blues in Hollywood. He played the cello in the film Samantha, where he portrayed a college student studying music alongside Martha Plimpton. He played cello in the song "Place Your Hand" from Melissa Etheridge's 1992 album Never Enough, on the EP for Rain Phoenix's band Papercranes, and on the score to Mission: Impossible III (2006), Mission: Impossible - Ghost Protocol (2011), and Star Trek Into Darkness (2013).[6] Most recently, he portrayed a cello soloist in the second and third seasons of Mozart in the Jungle.