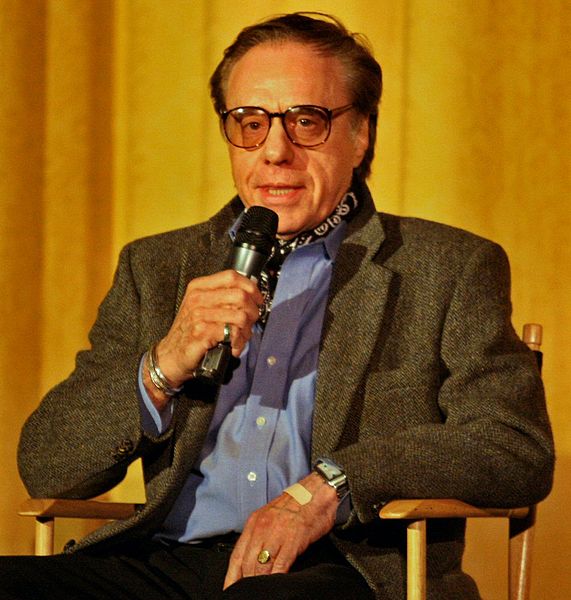 In the early 1960s, Bogdanovich was known as a film programmer at the Museum of Modern Art in New York City. An obsessive cinema-goer, seeing up to 400 movies a year in his youth, Bogdanovich showcased the work of American directors such as Orson Welles and John Ford—whom he later wrote a book about, based on the notes he had produced for the MoMA retrospective of the director—and Howard Hawks. Bogdanovich also brought attention to such forgotten pioneers of American cinema as Allan Dwan. Bogdanovich kept a card file of every film he saw between 1952 and 1970, with complete reviews of every film.

Bogdanovich was influenced by the French critics of the 1950s who wrote for Cahiers du Cinéma, especially critic-turned-director François Truffaut. Before becoming a director himself, he built his reputation as a film writer with articles in Esquire. These articles were collected in Pieces of Time (1973).

In 1966, following the example of Cahiers du Cinéma critics Truffaut, Jean-Luc Godard, Claude Chabrol and Éric Rohmer who had created the Nouvelle Vague ("New Wave") by making their own films, Bogdanovich decided to become a director. With his wife Polly Platt, he headed for Los Angeles, skipping out on the rent in the process.

Intent on breaking into the industry, Bogdanovich would ask publicists for movie premiere and industry party invitations. At one screening, Bogdanovich was viewing a film and director Roger Corman was sitting behind him. The two struck up a conversation when Corman mentioned he liked a cinema piece Bogdanovich wrote for Esquire. Corman offered him a directing job which Bogdanovich accepted immediately. He worked with Corman on Targets, which starred Boris Karloff, and Voyage to the Planet of Prehistoric Women, under the pseudonym Derek Thomas. Bogdanovich later said of the Corman school of filmmaking, "I went from getting the laundry to directing the picture in three weeks. Altogether, I worked 22 weeks - preproduction, shooting, second unit, cutting, dubbing - I haven't learned as much since."[4]

Returning to journalism, Bogdanovich struck up a lifelong friendship with Orson Welles while interviewing him on the set of Mike Nichols's Catch-22 (1970). Bogdanovich played a major role in elucidating Welles and his career with his writings on the actor-director, most notably his book This is Orson Welles (1992). In the early 1970s, when Welles was having financial problems, Bogdanovich let him stay at his Bel Air mansion for a couple of years.[citation needed]

In 1970, Bogdanovich was commissioned by the American Film Institute to direct a documentary about John Ford for their tribute, Directed by John Ford (1971). The resulting film included candid interviews with John Wayne, James Stewart and Henry Fonda, and was narrated by Orson Welles. Out of circulation for years due to licensing issues, Bogdanovich and TCM released it in 2006, featuring newer, pristine[clarification needed] film clips, and additional interviews with Clint Eastwood, Walter Hill, Harry Carey Jr., Martin Scorsese, Steven Spielberg and others.

Much of the inspiration which led Bogdanovich to his cinematic creations came from early viewings of the film Citizen Kane. In an interview with Robert K. Elder, author of The Film That Changed My Life, Bogdanovich explains his appreciation of Orson Welles' work:

It's just not like any other movie you know. It's the first modern film: fragmented, not told straight ahead, jumping around. It anticipates everything that's being done now, and which is thought to be so modern. It's all become really decadent now, but it was certainly fresh then.[5]

The 32-year-old Bogdanovich was hailed by critics as a "Wellesian" wunderkind when his best-received film, The Last Picture Show, was released in 1971. The film earned eight Academy Award nominations, including Best Director, and won two statues, for Cloris Leachman and Ben Johnson in the supporting acting categories. Bogdanovich co-wrote the screenplay with Larry McMurtry, and it won the 1971 BAFTA award for Best Screenplay. Bogdanovich cast the 21-year-old model Cybill Shepherd in a major role in the film and fell in love with her, an affair that eventually led to his divorce from Polly Platt, his longtime artistic collaborator and the mother of his two daughters.

Bogdanovich followed up The Last Picture Show with the popular comedy What's Up, Doc? (1972), starring Barbra Streisand and Ryan O'Neal, a screwball comedy indebted to Hawks's Bringing Up Baby (1938) and His Girl Friday (1940). Despite his reliance on homage to bygone cinema, Bogdanovich solidified his status as one of a new breed of A-list directors that included Academy Award winners Francis Ford Coppola and William Friedkin, with whom he formed The Directors Company. The Directors Company was a generous production deal with Paramount Pictures that essentially gave the directors carte blanche if they kept within budget limitations. It was through this entity that Bogdanovich's Paper Moon (1973) was produced.

Paper Moon, a Depression-era comedy starring Ryan O'Neal that won his 10-year-old daughter Tatum O'Neal an Oscar as Best Supporting Actress, proved the high-water mark of Bogdanovich's career. Forced to share the profits with his fellow directors, Bogdanovich became dissatisfied with the arrangement. The Directors Company subsequently produced only two more pictures, Coppola's The Conversation (1974), which was nominated for Best Picture in 1974 alongside The Godfather, Part II, and Bogdanovich's Daisy Miller, which had a lacklustre critical reception.

Daisy Miller (1974) was a disappointment at the box office. At Long Last Love (1975) and Nickelodeon (1976) were critical and box office disasters, severely damaging his standing in the film community. Feeling against Bogdanovich began to turn. "I was dumb. I made a lot of mistakes," he said in 1976.[6]

In 1975, he sued Universal for breaching a contract to produce and direct Bugsy.[7]

He took a few years off then returned to directing with a lower budgeted film, Saint Jack (1979), which was a critical success although not a box office hit. The making of this film marked the end of his romantic relationship with Cybill Shepherd.

Dorothy Stratten and They All Laughed

Bogdanovich's next film was the romantic comedy They All Laughed (1981), which featured Dorothy Stratten, a former model who began a romantic relationship with Bogdanovich. Stratten was murdered by her estranged husband shortly after filming completed.

Bogdanovich turned back to writing as his directorial career sagged, beginning with The Killing of the Unicorn - Dorothy Stratten 1960-1980, a memoir published in 1984. Teresa Carpenter's "Death of a Playmate" article about Dorothy Stratten's murder was published in The Village Voice and won the 1981 Pulitzer Prize, and while Bogdanovich did not criticize Carpenter's article in his book, she had lambasted both Bogdanovich and Playboy mogul Hugh Hefner, claiming that Stratten was a victim of them as much as of her husband, Paul Snider, who killed her and himself. Carpenter's article served as the basis of Bob Fosse's film Star 80 (1983), in which Bogdanovich, for legal reasons, was portrayed as the fictional director "Aram Nicholas," a sympathetic but possibly misguided and naive character.

Bogdanovich took over distribution of They All Laughed himself. He later blamed this for why he had to declare bankruptcy in 1985.[8] He declared he had a monthly income of $75,000 and monthly expenses of $200,000.[9]

In the early 80s, Bogdanovich wanted to make I'll Remember April with John Cassavetes and The Lady in the Moon written with Larry McMurtry.[11] He made the film Mask instead, released in 1985.

Bogdanovich's 1990 sequel to The Last Picture Show,Texasville, was a critical and box office disappointment.

Both films occasioned major disputes between Bogdanovich, who still demanded a measure of control over his films, and the studios, which controlled the financing and final cut of both films. Mask was released with a song score by Bob Seger against Bogdanovich's wishes (he favored Bruce Springsteen), and Bogdanovich has often complained that the version of Texasville that was released was not the film he had intended. A director's cut of Mask, slightly longer and with Springsteen's songs, was belatedly released on DVD in 2006. A director's cut of Texasville was released on laserdisc, and the theatrical cut was released on DVD by MGM in 2005. Around the time of the release of Texasville, Bogdanovich also revisited his earliest success, The Last Picture Show, and produced a slightly modified director's cut. Since that time, his recut has been the only available version of the film.

Bogdanovich directed two more theatrical films in 1992 and 1993, but their failure kept him off the big screen for several years. One, Noises Off..., based on the Michael Frayn play, has subsequently developed a strong cult following[citation needed], while the other, The Thing Called Love, is better known as one of River Phoenix's last roles before his untimely death.

Bogdanovich, drawing from his encyclopedic knowledge of film history, authored several critically lauded books, including Peter Bogdanovich's Movie of the Week, which offered the lifelong cinephile's commentary on 52 of his favorite films, and Who The Devil Made It: Conversations with Legendary Film Directors and Who the Hell's in It: Conversations with Hollywood's Legendary Actors, both based on interviews with directors and actors.

In 2001, Bogdanovich resurfaced with The Cat's Meow. Returning once again to a reworking of the past, this time the supposed murder of director Thomas Ince by Orson Welles's bête noire William Randolph Hearst, The Cat's Meow was a modest critical success but made little money at the box office. Bogdanovich says he was told the story of the alleged Ince murder by Welles, who in turn said he heard it from writer Charles Lederer.[13]

In addition to directing some television work, Bogdanovich returned to acting with a recurring guest role on the cable television series The Sopranos, playing Dr. Melfi's psychotherapist, also later directing a fifth-season episode. He also voiced the analyst of Bart Simpson's therapist in an episode of The Simpsons, and appeared as himself in the "Robots Versus Wrestlers" episode of How I Met Your Mother along with Arianna Huffington and Will Shortz. Quentin Tarantino also cast Bogdanovich as a disc jockey in Kill Bill: Volume 1 and Kill Bill: Volume 2. "Quentin knows, because he's such a movie buff, that when you hear a disc jockey's voice in my pictures, it's always me, sometimes doing different voices," said Bogdanovich. "So he called me and he said, 'I stole your voice from The Last Picture Show for the rough cut, but I need you to come down and do that voice again for my picture...'"[14]

Bogdanovich hosted The Essentials on Turner Classic Movies, but was replaced in May 2006 by TCM host Robert Osborne and film critic Molly Haskell. Bogdanovich has hosted introductions to movies on Criterion Collection DVDs, and has had a supporting role as a fictional version of himself in the Showtime comedy series Out of Order. He will next appear in The Dream Factory.

In 2007, Bogdanovich was presented with an award for outstanding contribution to film preservation by The International Federation of Film Archives (FIAF) at the Toronto International Film Festival.[16]

In 2010, Bogdanovich joined the directing faculty at the School of Filmmaking at the University of North Carolina School of the Arts. On April 17, 2010, he was awarded the Master of Cinema Award at the 12th Annual RiverRun International Film Festival. In 2011, he was given the Auteur Award by the International Press Academy, which is awarded to filmmakers whose singular vision and unique artistic control over the elements of production give a personal and signature style to their films.[17]

In 2012, Bogdanovich made news with an essay in the Hollywood Reporter, published in the aftermath of the Aurora, Colorado, theater shooting, in which he argued against excessive violence in the movies:

Today, there's a general numbing of the audience. There's too much murder and killing. You make people insensitive by showing it all the time. The body count in pictures is huge. It numbs the audience into thinking it's not so terrible. Back in the '70s, I asked Orson Welles what he thought was happening to pictures, and he said, "We're brutalizing the audience. We're going to end up like the Roman circus, live at the Coliseum." The respect for human life seems to be eroding.[18]

Bogdanovich's most recent film, She's Funny That Way, was released in theaters and on demand in 2014.