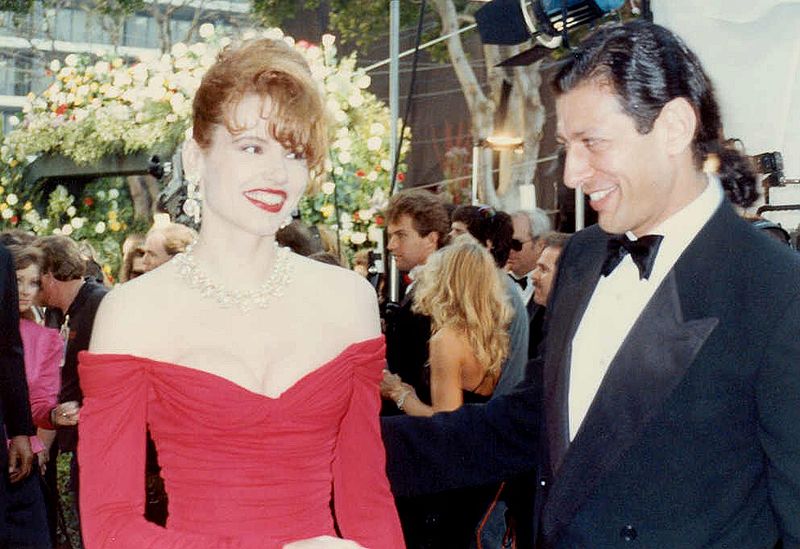 Goldblum starred in films including Invasion of the Body Snatchers (1978), The Big Chill (1983), and Into the Night (1985) before coming to the attention of wider audiences in David Cronenberg's The Fly (1986) which earned him a Saturn Award for Best Actor.

Goldblum was born and raised in West Homestead, Pennsylvania, a suburb of Pittsburgh. His mother, Shirley (née Temeles), was a radio broadcaster who later ran a kitchen equipment and appliances sales firm, and his father, Harold L. Goldblum, was a medical doctor.[1][2] He has a sister, Pamela, and an older brother, Lee. Another older brother, Rick, died of kidney failure at age 23.[3] His family is Jewish, and had emigrated from Russia and Austria to the U.S.[4][5] During his childhood, Goldblum belonged to an Orthodox synagogue and had a bar mitzvah.[6]

Goldblum's parents were interested in show business.[7] Goldblum moved to New York City at 17 to become an actor. He worked on the stage and studied acting at the renowned Neighborhood Playhouse under the guidance of acting coach Sanford Meisner. He made his Broadway debut in the Tony Award-winning musical Two Gentlemen of Verona. He is also an accomplished jazz pianist and declared that if he did not act, he would have become a professional musician.

Goldblum made his film debut as a home-invading thug in the 1974 Charles Bronson film Death Wish. He briefly appeared as a protester in the TV movie Columbo: A Case of Immunity (1975). He has a brief part as a party guest in Annie Hall (1977); Goldblum is seen saying into the telephone at a Hollywood party, "This is Mr. Davis. I forgot my mantra."[8] Goldblum has had leading roles in films such as The Fly (1986), Jurassic Park (1993), Earth Girls Are Easy, The Tall Guy, Vibes (1988) and Into the Night (1985). Goldblum's strong supporting roles include those in Invasion of the Body Snatchers (1978), The Big Chill (1983), and Independence Day (1996), as well as the Wes Anderson films The Life Aquatic with Steve Zissou (2004) and The Grand Budapest Hotel (2014) and the cult films The Adventures of Buckaroo Banzai Across the Eighth Dimension (1984) and Igby Goes Down (2002).

For several years, Goldblum was the voice for most U.S. Apple commercials, including advertisements for the iMac and iBook. He also voices some U.S. Toyota commercials as well as Procter & Gamble's facial cream line. He has recently appeared on Irish TV in commercials for the National Lottery.

Goldblum taught acting at Playhouse West in North Hollywood with Robert Carnegie. It was with several actors from this acting company that he improvised and directed the live action short film Little Surprises, which was nominated for an Academy Award in 1996.

Goldblum got the role of Adam in Adam Resurrected, a film adaptation of the Yoram Kaniuk novel about a former German entertainer who becomes the ringleader to a group of Holocaust survivors in an asylum after World War II.

In September 2006, it was announced that Goldblum was one of the founding members of a new theater company in New York called The Fire Dept.

He made a guest appearance on Sesame Street in 1990 as Bob's long-lost brother Minneapolis (parody of Indiana Jones), in a sketch where Big Bird's friend Snuffleupagus had "the golden cabbage of Snuffertiti" hidden in his cave. He has also appeared on Tom Goes to the Mayor, The Colbert Report, Tim and Eric Awesome Show Great Job!, and Portlandia.

In 2014, Goldblum's jazz band, The Mildred Snitzer Orchestra, did a weekly show at the Carlyle Hotel.[9]

Goldblum replaced Chris Noth as a senior detective on Law & Order: Criminal Intent.[10] In the series, Goldblum plays Detective Zack Nichols. In August 2010, media outlets reported that Goldblum had decided not to return to Criminal Intent due to persistent concerns about the program's future.[11][12]

In 2014, Goldblum appeared in an episode of Last Week Tonight parodying his role in Law & Order. In 2016, he reprised his role of David Levinson in Independence Day: Resurgence, the sequel to Roland Emmerich's 1996 alien invasion/disaster film Independence Day.

He was featured in a Currys Christmas advert campaign in November 2015.[16] Goldblum does the commercials for Apartments.com.[17] In 2017, Goldblum also did a series of online commercials for the Australian food ordering app Menulog.[18]

On 29 May 2018, Billboard announced that Goldblum had signed to Decca Records to release a studio album later that year.[19] The record is set to be released on 9 November 2018.[20] In July 2018 a 25 ft (7.6m) statue of Jeff Goldblum, a temporary installation, appeared next to London's Tower Bridge to mark 25 years of Jurassic Park.[21]

Goldblum in 2017 at the Deauville American Film Festival.

Jeff Goldblum has contributed as a voice actor to the following games :

Report a problem
Write to Jeff Goldblum at FanPal • 2021