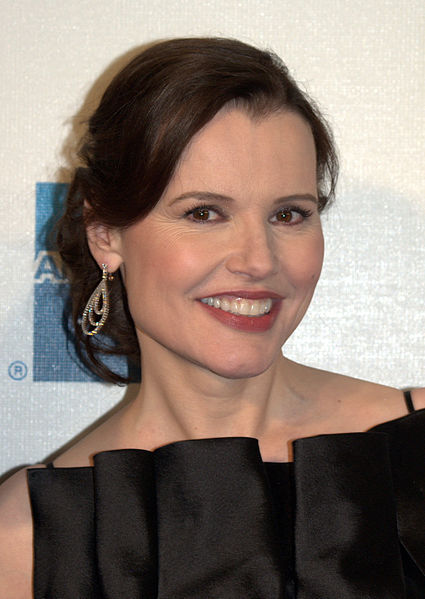 Virginia Elizabeth "Geena" Davis (born January 21, 1956)[7] is an American actress, film producer, writer, former model, and former archer.[8] She is known for her roles in The Fly (1986), Beetlejuice (1988), The Accidental Tourist (1988), Thelma & Louise (1991), A League of Their Own (1992), The Long Kiss Goodnight (1996), and Stuart Little (1999). For her performance in The Accidental Tourist, she won the Academy Award for Best Supporting Actress, and for Thelma & Louise, she was nominated for an Academy Award for Best Actress along with her co-star Susan Sarandon.

In 2005, Davis won the Golden Globe Award for Best Actress - Television Series Drama for her role in Commander in Chief. She has since portrayed the recurring role of Dr. Nicole Herman in Grey's Anatomy (2014-2015, 2018), and also starred as Regan MacNeil-Angela Rance in the first season of the horror television series The Exorcist (2017), on Fox.

At an early age, she became interested in music. She learned piano and flute and played organ well enough as a teenager to serve as an organist at her Congregationalist church in Wareham.[12][13]

Davis attended Wareham High School and was an exchange student in Sandviken, Sweden, becoming fluent in Swedish.[12] Enrolling at New England College, she graduated with a bachelor's degree in drama from Boston University in 1979.[2][12]

Following her education, Davis served as a window mannequin for Ann Taylor until signing with New York's Zoli modeling agency.[14]

Davis was working as a model when she was cast by director Sydney Pollack in his film Tootsie (1982) as a soap opera actress.[12] She followed the role with the part of Wendy Killian in the short-lived television series Buffalo Bill,[15] which aired from June 1983 to March 1984. She also wrote the Buffalo Bill episode titled "Miss WBFL."[15]

During the run of Buffalo Bill, in 1983, Davis also appeared as Grace Fallon in an episode of Knight Rider titled "K.I.T.T. the Cat". Her television credits from the mid-1980s also include one episode of Riptide, three episodes of Family Ties, and an episode of Remington Steele. This was followed by a series of her own, Sara, which lasted 13 episodes.

After roles in Fletch, The Fly, Beetlejuice, and several other movies Davis received an Oscar as Best Supporting Actress for her appearance in The Accidental Tourist (1988), and a Best Actress nomination for her role in Thelma & Louise (1991).[12] Davis replaced Debra Winger in the role of Dottie Hinson in A League of Their Own (1992), and received a Best Actress Golden Globe Award nomination for her performance.[16] She then co-starred in Hero alongside Dustin Hoffman and Andy Garcia.

Davis then teamed up with her husband at that time, director Renny Harlin, for the films Cutthroat Island (1995) and The Long Kiss Goodnight (1996). Harlin and she also produced those films. Davis was nominated for the Saturn Award for her performances as Samantha/Charlie in The Long Kiss Goodnight,[17] and as Eleanor Little in Stuart Little (1999), a role she reprised in 2002 and again in 2005.[18]

In 2000-2001, Davis starred in the short-lived sitcom The Geena Davis Show. In the beginning of 2004, she guest-starred as Grace Adler's sister, Janet, on the NBC sitcom Will & Grace. She went on to star in the ABC television series Commander in Chief, portraying the first female president of the United States.[19] This role garnered her a Golden Globe for Best Actress in a Drama Series in 2006, and she also was nominated for an Emmy Award and a SAG Award for Outstanding Female Actor in a Drama Series. Also in 2006, she was awarded the Women in Film Lucy Award.[20]

She starred in the Australian-produced, American-set Accidents Happen, which was released in April 2010.

During the 11th season of Grey's Anatomy, Davis played a recurring role as Dr. Nicole Herman, who is an attending fetal surgeon who has a life-threatening brain tumor.

In October 2015, it was announced that Davis would be starring in the film adaptation of Marjorie Prime alongside Jon Hamm.[21]

In autumn 2016, Davis began her role in The Exorcist, based on the 1973 film of the same name. In the series, Davis stars as the grown-up Regan MacNeil, who has renamed herself Angela Rance to find peace and anonymity from her ordeal as a child. The same demon that tormented Regan as a child apparently did not die as it did in the film's portrayal, and now it has hold of one of Angela's daughters. The all-star cast includes Alan Ruck as Angela's husband and Mexican actor/singer Alfonso Herrera and British actor Ben Daniels as exorcism-performing priests, as well as Sharon Gless in a recurring role as Chris MacNeil (the Ellen Burstyn role in the feature film).

Davis is a supporter of the Women's Sports Foundation and an advocate for Title IX, an Act of Congress focusing on equality in sports opportunities, now expanded to prohibit gender discrimination in United States' educational institutions.[22][23]

In 2004, while watching children's television programs and videos with her daughter, Davis noticed an imbalance in the ratio of male to female characters. Davis went on to sponsor the largest research project ever undertaken on gender in children's entertainment (resulting in four discrete studies, including one on children's television) at the Annenberg School for Communication at the University of Southern California.

The study, directed by Dr. Stacy Smith, showed that there were nearly three males to every one female character in the nearly 400 G, PG, PG-13, and R-Rated movies the undergraduate team of Annenberg students analyzed.[24]

Geena Davis in a speech at the Millennium Development Goals Countdown event in the Ford Foundation Building in New York, addressing gender roles and issues in film (24 September 2013)

In 2005, Davis teamed up with the non-profit group, Dads and Daughters, to launch a venture dedicated to balancing the number of male and female characters in children's television and movie programming.[25]

Davis launched the Geena Davis Institute on Gender in Media in 2007.[26] The Institute's first focus is an on-the-ground program that works collaboratively with the entertainment industry to dramatically increase the presence of female characters in media aimed at children and to reduce stereotyping of females by the male-dominated industry.[27] It seeks to address inequality in Hollywood. For her work in this field she received an honorary Doctor of Fine Arts degree from Bates College in May 2009.[28]

In 2011, Davis became one of a handful of celebrities attached to USAID and Ad Council's FWD campaign, an awareness initiative tied to that year's East Africa drought. She joined Uma Thurman, Chanel Iman and Josh Hartnett in television and internet ads to "forward the facts" about the crisis.[29]

In 2015, Davis launched an annual film festival to be held in Bentonville, Arkansas, to highlight diversity in film, accepting films that prominently feature minorities and women in the cast and crew. The Bentonville Film Festival took place from May 5-9, 2015, and began accepting submissions on January 15.[30]

In July 1999, Davis was one of 300 women who vied for a semifinals berth in the U.S. Olympic archery team, to participate in the Sydney 2000 Summer Olympics.[8][12] She placed 24th of 300 and did not qualify for the team, but participated as a wild-card entry in the Sydney International Golden Arrow competition.[31] In August 1999, Davis then stated that she was not an athlete growing up and that her introduction to archery was in 1997, two years before her tryouts.[32]

Reza Jarrahy and Davis in 2009

Davis has been married four times.[33] Previously to Richard Emmolo (1982-83); actor Jeff Goldblum (1987-90), with whom she starred in three films, Transylvania 6-5000, The Fly, and Earth Girls Are Easy; and Renny Harlin (1993-98), who directed two films in which she starred, Cutthroat Island and The Long Kiss Goodnight.